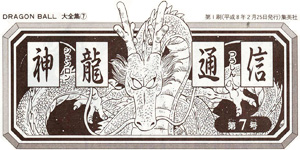 We went ahead and asked what’s been on everyone’s mind: what Akira Toriyama will do now!

Thank you for taking time out of your busy schedule today….
Toriyama: I’m not busy at all. My work for the Dragon Ball Daizenshuu has also settled down, so I’m not doing any work right now. (laughs)
In that case, you must be able to take it nice and easy.
Toriyama: Well, every morning after I see my son off to school, I can finally sleep. Right now, I’m building a new workspace. So, in coming up with the plans and such, I end up staying up all night. I’m pulling more all-nighters than when I was doing a weekly serial. (laughs)
With regards to the anime’s new series, Dragon Ball GT, how involved are you?
Toriyama: Just a little bit. I’ll check the stories that come up from Toei Animation, and give them a little bit of advice. Also, I’ve drawn just a few characters and illustrations. But it’s interesting! It feels like, “Ah, so they could do it this way”. I think everyone at Toei Animation really racked their brains. Good work. To think they’d make Goku little. With this story, I might even be able to continue the manga serialization again… though I have absolutely no intention of drawing it. (laughs)
In that case, GT comes with Toriyama-sensei’s recommendation!
Toriyama: Yes! I recommend it. I’m also looking forward to it as an ordinary viewer.

A Macintosh is on its way!!

Toriyama: Ah, come to think of it, soon I’ll be getting a Macintosh (a PC made by Apple Computer, Inc.) from a certain person!

Katsura: Hm? What are you talking about?

(At this point, Masakazu Katsura-sensei suddenly bursts in!!)

With Masakazu Katsura’s intrusion, the interview goes in an unexpected direction…

Toriyama: I was talking about a Macintosh. Do you know what a Macintosh is? I bet you don’t know anything about stuff like computers.

Katsura: What are you saying? You’re tech-dumb, too. Can you work a sound system by yourself?

Toriyama: Sound? I can listen to music if I want.

Katsura: Not that; I mean, can you connect the cables, and make it work? Stuff like that.

I- I see…
Toriyama: But, once I get a Macintosh, it’ll be amazing. I’ll leave people like you in the dust, Katsura-kun. It seems like I’ll be able to do a lot of interesting things, too. If I say, “Put the main character in a running pose!” into the mic, maybe it’ll go ahead and draw it for me? That sort of thing would be the ideal.

Katsura: You really hate anything that involves actual work, don’t you? You don’t even use screen tone…

Toriyama: You use too much. (laughs) Oh, that’s right. You’re going to draw something this time in the Shenlong Times, aren’t you. Why don’t you draw Goku with tone all over the place?

Toriyama: Do it, then. This time, was it?

Y- yes.
Toriyama: I do have a lot of ideas, though. As I learn how to use the Macintosh, I’ll go ahead with writing a one-shot or something.
Thank you very much today.

A- at any rate, do your best, Akira Toriyama!

Toriyama-sensei and Katsura-sensei are Super-Close?!

Intruding into this interview was Masakazu Katsura-sensei. Since Toriyama-sensei and Katsura-sensei were both under editor Kazuhiko Torishima, they are really good friends. Even after this interview, the two of them had a lively conversation on the subject of Torishima. We hear that they’re like war buddies who fought together under the strict Torishima!

Panel 1
With the cover art for this Daizenshuu volume seven, I am now finished drawing art for Dragon Ball. It’s the last one.

And on top of that, this cover illustration is the one I used back in the last panel of the final chapter.

At that time, I painted it in with two colors, but for the Daizenshuu, I just made a photocopy and painted it for four-color [printing].

Panel 2
I had planned on slacking off, but this actually took more time to do, so I kind of failed….

WITH THIS, I’VE FINALLY BEEN SET FREE FROM DRAGON BALL———!!!

Panel 4
…Writing it that way, you might think that I must have hated Dragon Ball with a passion, but that’s not the case.

It’s just that, for someone like me, who only looks ahead to tomorrow, a manga that’s already ended holds no interest.

Panel 5
And as for whether I’ll be drawing a new manga right away, I won’t.

I don’t have that kind of talent, so I’ll have to think about it long and hard, starting now.

It’s the same thing even when I’m drawing a one-shot with just a few pages.

Panel 6
Plus, right now, I’ve got six cover illustrations to do for Daizaburō Okumoto-sensei’s [translation of] Fabre’s Souvenirs Entomologiques, [See “I LOVE DRAGON BALL” in the Shenlong Times from Daizenshuu 6] as well as some design work that’s still a secret, so thinking about manga will have to come after that…

I don’t mind if you forget about me, but if a one-shot manga appears in Shōnen Jump, please read it.

Although I have no confidence in it being interesting…

Panel 7
So goodbye, everyone.

Thank you very much for liking Dragon Ball!

The TV show and movies will continue, so please [continue to support them]!

For the final round, we have Katsura-sensei, Toriyama-sensei’s friend, who also intruded on this [issue’s] interview!

Greetings, all you Dragon Ball fans; I am “K2R-Man” [pronounced “Katsura-Man”], a.k.a. Masakazu Katsura. I have had the honor of being a close friend of Toriyama-sensei these past 16 years. Recently, I have had the privilege of consulting with him on a number of things related to work. Why, I remember back during the series DNA2: when he told me, “If you’re going to have your main character transform, why not try changing the color of his hair?” and further, “Like I said, you’ve just gotta make him fight,” it felt like the word of God. And then when I drew it, with some unease that it might be exactly the same as a Super Saiyan, Dragon Ball fans chastised me with things like “Stop mocking Dragon Ball!” and “Stop copying Dragon Ball!” It is a bittersweet memory. For that reason, I now have been given the honor of drawing Goku and No. 18 (for what reason?). Goku ended up looking like he might go off to Harajuku or Shibuya, but I ask you, dear fans, please try not to be angry.
Toriyama-san, giving his heartwarming advice
(Toriyama:) You use too much tone.
(Katsura:) …

From the bottom of my heart, I await a speedy [return to] weekly serialization. 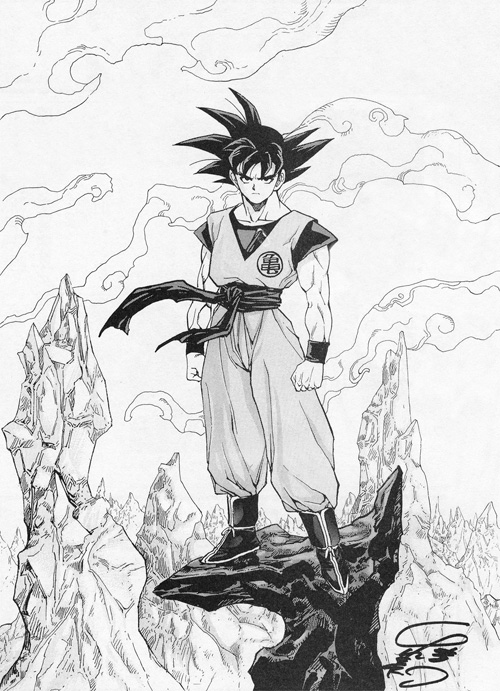 Rediscover the Original’s Charm, with the New Movie Opening in March!!
In the next movie, young Goku plays a big role! The story is a new work based on volumes one through eight of the original manga. And on top of that, a robot designed by Toriyama-sensei will appear. Don’t miss this great adventure with enough impact to come flying right off the screen!!

(Image) ↑ When you buy a pre-release ticket, you can get the cool poster above. Gotta have it!!

The innocent Goku has returned!!
←Goku
The strong, cute young Goku. He even has his tail!

(Image) ↑With visuals incorporating plenty of CG, young Goku is back in action. It’s one awesome scene after another!!

Bulma is a youthful gal, of course!!
Bulma→
Bulma’s young all over again! Kame-Sen’nin will fall for her charms!
DRAGON BALL DAIZENSHUU EXTRA VOLUME
DB Carddass Perfect File, Part 2
It’s the Second Stage of the Ultimate Carddass Catalogue! A thorough inventory of the three popular series, Super Battle, Visual Adventure, and Characters Collection! It’s one volume you don’t want to miss!!
(Gotenks) Yeeeah!! When it comes to Carddass, this is right on the mark!!
On Sale 11 March, for ¥980 (tax included)
English Translation: SaiyaJedi
« Previous Page
Translations Archive