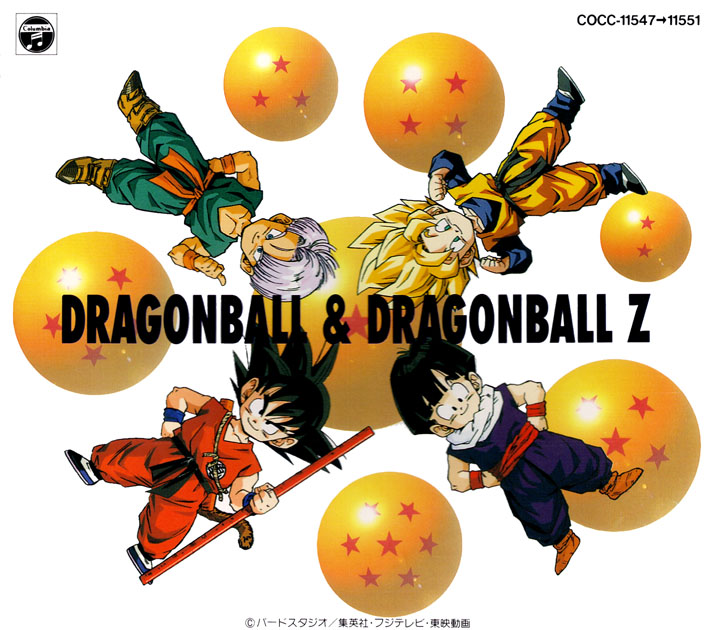 Where Will This End Up Going?
By the composer, Shunsuke Kikuchi
Dragon Ball was the series I worked on after Dr. Slump – Arale-chan. I recall that the request to compose the background music came because I had just worked on the animated adaptation of another series by Akira Toriyama-san, and since that one went so well (also on the musical side of things), I was entrusted with this one as well. The original comic is also like that, but the world of Dragon Ball is extremely cheerful and light-hearted and there haven’t been many animated series like that so far, so I thought composing the score should be fun.

Regarding any distinguishing features between Dragon Ball and Dr. Slump – Arale-chan, since the composer is the same, there are inevitably going to be similarities, but before, the main character was a girl, and I tried to focus on the fact that the main character is an even livelier and adorable boy this time around. At first, the series had a sort of Chinese feel to it, but I was told not to focus too much on it and to just bring out an atmosphere of a mysterious, undisclosed land.

Normally, episodes of televised animated series clock in at around 30 minutes1. With this kind of runtime, if I were to use long pieces, there would be nowhere to use them, so I normally compose pieces that are around one and a half to two minutes long. In the case of Dragon Ball, since the story is so fast-paced, I talked to Shigeru Miyashita-san, who is in charge of music selection, and we realized that the tracks probably wouldn’t even need to reach the one-minute mark. Instead of focusing on length, we should probably focus on quantity instead. Whenever I’m in charge of composing something for Toei Animation, I always ask for Miyashita-san to be in charge of music selection. He was my underclassman at Nihon University, after all. Miyashita-san is a composer himself and he truly understands my points of view, so I always feel safe leaving things up to him.

When the story transitioned to Dragon Ball Z, the stakes got higher and Goku’s enemies went from local to international to now interplanetary. Where will this end up going? (laughs) The series really has come a long way. At first, I thought that the story would end once they collected all the Dragon Balls. I consider myself fortunate that the series that I work on tend to be on the longer side of things. If I’m told that it will have just one season, then it will probably end up being quite long.

In this new series, I made a lot of musical arrangements of the main theme songs. Those songs were not composed by me, so since they have melodies that I wouldn’t have come up with myself, that brings some musical variety to the series.

I am extremely grateful to all of the fans who enjoyed the music I composed and even went so far as to buy this CD set. Dragon Ball is going to keep on airing, so I want to keep on making music that is fun in a lot of different ways.

Born in Hirosaki City, Aomori Prefecture. After having graduated the Mechanical Engineering course at the Hirosaki Technical School, he enrolled in the Music course at the Nihon University’s Fine Arts College and learned musical composition.

He got his debut as a film composer in Hajime Satō’s Hachininnme no Teki2. Ever since, he’s continued to compose music for theatrical films, television films, and animated productions, and the number of works he’s contributed to is now easily more than 300.

Besides Dragon Ball and Kamen Rider, which he is famous for, he’s also had his hands in numerous other series such as Tiger Mask, Getter Robo, Doraemon, G-Men ’75, and Stewardess Monogatari.

The following translator notes are included for the benefit of the reader as supplemental information.
1 More like between 22-24 minutes if you remove the advertisements, and obviously even less than that if you remove the opening and ending themes, the recap and the next episode preview.
2 Hachininme no Teki (八人目の敵), lit. “The Eighth Enemy”
English Translation: Zénpai
« Previous Page
Translations Archive