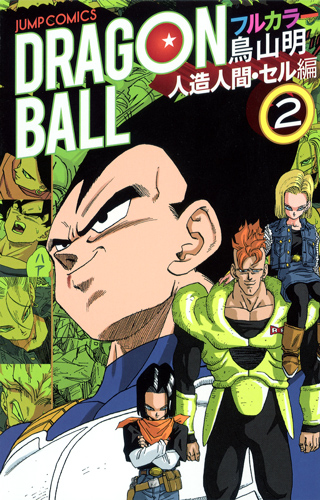 We answer about the things that are on everyone’s mind, such as the story and characters of the “Artificial Humans & Cell arc”!
Q1: Why did Nos. 17 & 18 become Artificial Humans?
They were captured by Dr. Gero!
They ran across Gero by chance and were made into his experimental guinea pigs. Since they were remodeled against their will, they’re rebellious towards Gero!
Q2: Piccolo and God were originally one?
He was a bad guy called Piccolo Daimaō!
Piccolo Daimaō is the evil that he discarded when he became God. The child that Daimaō birthed at the time of his death is Piccolo, who became Goku’s ally through life-and-death battle!
Q3: What kind of company is Capsule Corporation?
It’s the world’s number-one company through its many inventions!
Bulma’s father Dr. Brief’s company. He/it became super-rich by developing the Hoipoi Capsule!

Q4: What kind of Artificial Humans were Nos. 1–8?
Entirely artificial, like No. 19!
The sole weakness of the genius Dr. Gero’s inventions was that “personality control” didn’t work well, so that’s believed to be the reason why he changed his methods to using humans who were bad to begin with and remodeling them into Artificial Humans, like Nos. 17 and 18. It was thought that he had succeeded with cyborg-types, but ultimately, these were also failures because they wouldn’t listen to orders the way he wanted. He reversed course again, and No. 19 was his first success.
Q5: What type were Artificial Human Nos. 9–12?
They were all completely artificial!
Nos. 9–12 were entirely artificially constructed. The reason for their failure was the same as Nos. 1–8: almost all had problems with personality control. Too dark, too pure, just plain stupid, etc.
English Translation: SaiyaJedi
« Previous Page
Translations Archive