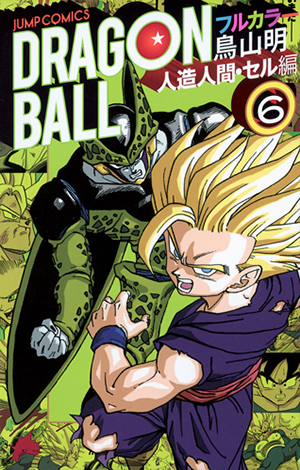 Explaining in detail about scenes and characters from the “Artificial Humans & Cell Arc” that are on your mind
Q1: What sort of bad guys have come to Earth up to now?
All sorts of strong guys, from Piccolo to Freeza and his father!
Goku and his allies stood against strong bad guys whenever they attacked, and saved the Earth.

– The terrifying Demon Clan
Piccolo Daimaō
He plunged the Earth into terror, and took the lives of Kuririn and many other allies.

– Piccolo Daimaō’s doppelganger
Ma Junior (Piccolo)
In order to avenge his father, he had a showdown with Goku at the Tenka’ichi Budōkai.

– The menacing fighting race
The Saiyans
Invaders who came to Earth. After a death match with Goku, only Vegeta survived.

– The greatest evil-doers in outer space
Freeza and his father
After getting defeated by Goku on Planet Namek, Freeza attacked Earth with his father!

Q2: What happened in the future that Trunks came from?
You can learn just a little bit about that future in the bonus chapter “Trunks the Story”!
This story depicts the future Trunks came from. The warriors were defeated by the cruel and overwhelming powerful artificial humans, and the Earth was left devastated. Though he lost an arm, Gohan still survived and tried to raise Trunks as a strong warrior, entrusting him with the last of Earth’s hope.

– Goku was felled by an illness… and Gohan sustained heavy injuries from the artificial humans’ attack.

– The remaining warriors, Gohan and Trunks, throw themselves into strict training in order to face the artificial humans!!

Q3: Can Shenlong grant any wish?
There are some wishes he can’t grant!
Shenlong cannot grant wishes that exceed the abilities of the person who created him, such as defeating a powerful enemy. As for reviving the dead, he can only revive somebody a single time!

Q4: Do modified-human types like Artificial Humans No. 17 and No. 18 get stronger if they train?
Since they’re human-based, of course they can become even stronger if they train.
In the case of modified-human types like No. 17 and No. 18, since they’re human-based they can become stronger if they train. By the way, though they don’t need to eat, they do need to hydrate. Also, their cells deteriorate slowly, so they age slowly too.
Artificial Humans & Cell Arc: Inside Scoop
The time machine was equipped with airplane functions too!?
At first I was thinking of adding in vehicle elements to it, like a plane. But in the end, it was only ever used as a time machine. Oh! If you look closely, you can see there’s no ladder, so only people who can fly are able to ride it (laugh).
Q5: Please tell me Artificial Humans No. 17 and No. 18’s names from back when they were humans!
No. 17 is Lapis, No. 18 is Lazuli!1
Q6: Where’d Artificial Human No. 17 go after the Cell arc, and what did he do?
He works in the wildlife preserve area of a gigantic royal nature park, as an outstanding guard who doesn’t hold back against poachers.2
It’s an ideal job for No. 17, who loves to be on his own and isn’t big on cooperating with others; since he’s so good at his job, he takes in a high salary. He’s married to a zoologist; they have one child and two adopted children, and live happily in an isolated house inside the nature park.

He went and met No. 18 and Kuririn one time, but didn’t talk about what he’d been up to, maybe because he considers such a wholesome lifestyle embarrassing.

1 “Lapis lazuli” is a semi-precious stone with an intense color.
2 Likely a reference to the character’s short cameo at the end of the series in the manga, which is slightly expanded upon in the TV adaptation, where he is out in the woods with a gun.
3 Toriyama is mis-remembering who his editor was at this point in the serialization. While Yū Kondō, his current editor at this point, was indeed the one who suggested the change in Cell’s forms and design, it was his former editor Kazuhiko Torishima who requested the change with the earlier artificial humans.
English Translation: Herms
Back to Previous Page