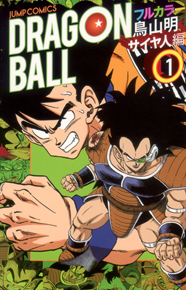 In this book we’ve got a special Q&A corner for you first-time readers of Dragon Ball!!
Q1: How old is Son Goku?
He was born in the year 737!!
Son Goku, aka Kakarrot, was born in “the year Age 737”!! At the start of this book he’s 24 years old!! (from “Dragon Ball Daizenshuu” 7)
Q2: What’s the connection between Son Goku and Piccolo!?
They’re two arch-rivals, with the Earth’s fate on the line!!
Piccolo is the reincarnation of the Great Demon King (Daimaō) who plotted world domination. He fought Goku at the Tenka’ichi Budōkai!!
Q3: Son Goku had a tail?
He had it up until becoming an adult.
Goku transforms into an Ōzaru when he looks at the full moon. Apprehensive about this, God cut it off when he was 15!!
Q4: What kind of person is “Chi Chi”, Goku’s wife and Gohan’s mother?
The daughter of Gyūmaō of Mount Frypan!!
Goku met her when he was 12. At that time they were actually betrothed, and they married at the 23rd Tenka’ichi Budōkai!
Q5: What kind of person is the God of Earth?
Piccolo Daimaō’s doppelganger!!
He’s a martial artist who cast off the evil inside himself previously during his training to become God. That evil became Piccolo Daimaō!!
Q6: What’s beneath the Serpent Road?
Hell is down there, and beneath that…!?
Beneath the Serpent Road is Hell. Beneath that is the universe, where Earth is. The “Dragon Ball” World has a strange shape!!

Q7: What’s the pecking order among Vegeta, Nappa, and Raditz?
Only Vegeta is royalty, but…
Vegeta is the prince and so he has a higher position due to strength. But Raditz and Nappa have equal status.
English Translation: Herms
Back to Previous Page