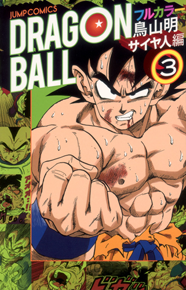 This Q&A corner answers all you readers’ naïve questions concerning the “Saiyan arc”!!
Q1: Tell me about Goku’s “Kamehameha”!
It’s the secret technique of the Kame-sen School!!
This special technique is practically synonymous with Goku! It’s inventor was his master Kame-Sen’nin, and Goku mastered it in no time!!
Q2: How many times has Earth’s moon been destroyed?
It’s actually been two times!!
Kame-Sen’nin destroyed it once, afraid of Goku becoming an Ōzaru!! Piccolo destroyed it the second time!!
Q3: Has Goku also ever become an Ōzaru?
He’s become one three times so far!!
The first time he transformed was as a young child. The second time was at Pilaf’s castle. The third time was during the finals of the 21st Tenka’ichi Budōkai.
Q4: Who or what is Mister Popo?
God’s attendant!
He’s a martial arts master who’s served successive generations of Gods!! The model for Earth’s Shenlong was made by Popo!!
Q5: Is Yajirobe an incredible warrior!?
Kinda, but also kinda not…?!
He came in handy getting rid of Vegeta. Ordinarily he lives an idle life at Karin Tower, like a retiree.
Q6: How high are Kuririn and co.’s battle powers?
When Vegeta & Nappa attacked:
Piccolo: 3,500
Son Gohan: 2,800
Tenshinhan: 1,830
Kuririn: 1,770
Yamcha: 1,480
Chiaotzu: 610
(from “Dragon Ball Daizenshuu” 7)

Q7: Why is Kaiō’s planet so small?
The fact is, it was destroyed by the God of Destruction!!
It used to be so big that its diameter was about 100 times that of Kaiō’s current planet. Apart from the size it was completely the same as it is now, with nothing but grassy fields and roads. Kaiō-sama enjoyed his hobby, driving, but then one day Beerus, the God of Destruction, stopped by and they played a video game together (it was a car racing one).1 Beerus lost, and so the planet was destroyed by the peeved God of Destruction. Kaiō then took a large leftover fragment, whittled it down to a sphere, and built a road on it so that he could have fun driving there. This became Kaiō’s current planet.

1 This explanation contradicts the one given by the character Whis in the movie itself, wherein Beerus is stated to have lost a game of “hide-and-seek”.
English Translation: Herms
Back to Previous Page