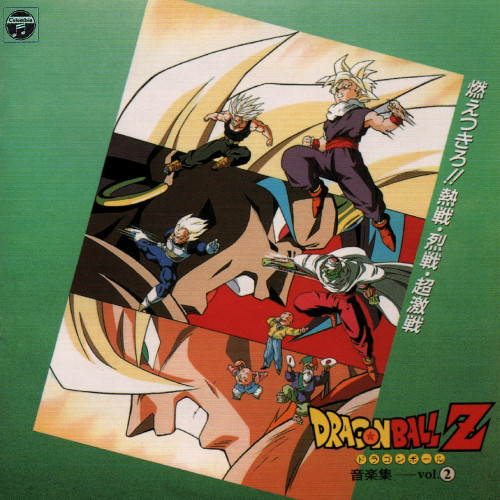 The exciting music of Dragon Ball Z
by Hiruta Sei’ichi, producer at Toei Animation Co., Ltd.
Earlier this year, on January 28th1, in the meeting room of the TAVAC Studio in Shinjuku, in between two cans of Oolong tea, there was a detailed briefing session between Kikuchi-sensei2 and director Yamauchi3. (Why Oolong tea, you ask? It’s not because we were particularly paying attention to our health or anything; it was just because our local coffee shop went out of business due to a steep increase in land prices…)

“So, for this piece, since it’s going to be playing during the scene where Kaiō-sama is sensing danger due to the destruction of the South Galaxy, please don’t use a somber melody, but a heavy one instead.”

“Not somber, but heavy…? Without something more concrete, it’s kind of hard to picture… Could you please be a little more specific?”

“Um, so… I want something with a solemn and oppressive atmosphere, but that doesn’t feel too dark.”

Before we have the footage, trying to picture the actual first scene from just the storyboards is pretty hard. It’s like, for instance, trying to imagine the landscape of a place you’ve never been to from just a map. Having to tell someone to compose music starting from a place like that is outright painful.

Having said that, in the Dragon Ball Z world, after Goku did it, Vegeta, Trunks and finally Gohan have all also attained the Super Saiyan transformation and will keep on enduring ever harder battles, but no matter how many painful developments unfold and how many grand, fierce battles keep on occurring, in order not to lose the indispensable but at the same time exciting light-heartedness that Dragon Ball Z is known for, Kikuchi-sensei‘s music plays an extremely big role.4

This is particularly true of the most recent film, Burn Up!! A Red-Hot, Raging, Super-Fierce Fight. When I saw the completed film for the first time, from the Turtle Hermit’s antics and Oolong’s silliness to Paragus’ tragic revenge and Broli’s fiendishness, all the way until reaching Goku’s coolness, we managed to capture a lot of what makes Dragon Ball Z what it is, all in surprising succession.

(Though in that initial scene with Kaiō-sama, I ended up nodding deeply while unwittingly grinning to myself.)

With both films and music, it really is special when you have something that will always make you excited no matter how many times you experience them, isn’t it?!

The season is spring. While Gohan is enjoying a hanami party6 with the Turtle Hermit, Kuririn, Trunks, Oolong, and Vegeta under the fully bloomed Sakura trees, a Saiyan suddenly comes to Vegeta. His name is Paragus and he used to work under Vegeta’s father. He came because he established a new Planet Vegeta and wants to welcome Vegeta as its new king. But he also warns that the new planet is now in danger due to the appearance of the Legendary Super Saiyan. Despite not showing interest in being king of the new planet, Vegeta’s competitive soul cannot help itself when it hears of “the Legendary Super Saiyan,” and so, he follows Paragus. Trunks and the others follow them in a hurry and board the Saiyan’s spaceship, which then departs to New Planet Vegeta.

Meanwhile, under request from Kaiō-sama, Goku is searching for the ki of the Legendary Super Saiyan, who has been rampaging throughout outer space, in order to defeat him. In doing so, he unwittingly arrives at New Planet Vegeta and reunites with Gohan, Trunks, and the others. They tell each other what led them there and their distrust for Paragus grows. And the planet that was supposed to be newly established was but a mere show, and in truth, was nothing more than a desolated planet; and so, the feeling that Paragus was hiding something important from them kept growing larger.

In fact, Paragus and his son Broli harbor a painful, dark past. The truth is that, fearful of the newborn Broli’s battle power, King Vegeta ordered the elimination of both Paragus and his son. Ever since then, Paragus has held a grudge and waited for his chance at exacting revenge against the son of King Vegeta by claiming his life. And Broli was the Legendary Super Saiyan all along. Paragus barely managed to control his son Broli, who had battle power big enough to completely destroy the entire Universe, through the use of a controller, but ever since Goku appeared, the controller has stopped working. What was stimulating Broli was none other than Goku’s ki. Broli then shows his true form as the Legendary Super Saiyan. There’s no-one who can stop the rampaging Broli now. Vegeta just stands in place, dumbfounded. Despite taking a beating, Goku, Gohan, and Trunks fight against the Legendary Super Saiyan, Broli… Will Goku be able to overcome this mighty enemy…?

The following translator notes are included for the benefit of the reader as supplemental information.
1 Considering when this CD came out, this was 28 January 1993.
2 Dragon Ball and Dragon Ball Z background music composer Shunsuke Kikuchi.
3 Shigeyasu Yamauchi, director of Dragon Ball Z Movie 8 and also of several Dragon Ball Z and Dragon Ball Kai episodes.
4 This genuinely is this long of a continuous run-on sentence in Japanese.
5 This section, present in the booklet after Hiruta’s comment, was most likely not written by Hiruta himself, but by a nameless member of the staff involved in the production of the CD. We are presenting it here for completeness’ sake.
6 A party (sometimes involving a picnic) held outside to enjoy the blooming flowers, such as seen here in the film.
English Translation: Zénpai
« Previous Page
Translations Archive