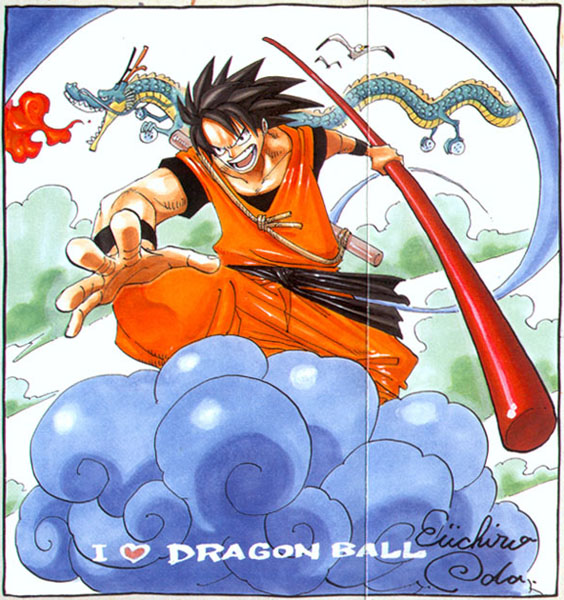 What on Earth is gonna happen?

“Kuririn died!!” On a summer’s day I will never forget, at the minshuku2 my school club was staying at for its retreat, someone was shouting and running down the corridor. In that week’s Jump, Dragon Ball had met with a big development. For us, this was a bigger event than any real-life news. We would all confirm it in Jump, collapsing in shock, and reciting the words we’d grown used to saying every week: “What’s gonna happen next week?” Oh, man, what’s gonna happen? Seriously, what’s gonna happen?

Over the 11 years of Dragon Ball’s serialization, I wonder just how many times we said, “What’s gonna happen?”

There’s the saying “God only knows”, but in this case, frighteningly enough, the creator and God, Akira Toriyama-sensei himself, is said to have uttered these words: “What’s gonna happen?” Ah…! Writing by the seat of your pants has gone too far.

However, regardless of the situation behind the scenes, the man named Akira Toriyama — no, Goku — would never betray our expectations. Every week, boys all over Japan would think together, “Where is this place?” when Goku went somewhere unknown, and we would howl, “They’ll pay for this!!” when Goku got angry. Birthed by the uniquely Japanese culture of weekly serialization, this is a shōnen manga for boys.

Dragon Ball is a masterpiece.

The following translator notes are included for the benefit of the reader as supplemental information.
1Eiichirō Oda (尾田栄一郎), born on 01 January 1975, is a manga artist best known for creating the manga series One Piece, which is currently the highest-selling manga series of all time.
2A kind of low-cost Japanese inn, where guests take out and put away their own bedding, and eat in a communal dining room rather than in their bedroom. The food is also much simpler than typical ryokan fare, and may be at least partly self-serve. While it is not very luxurious, it provides a distraction-free environment for sports practice and team bonding during the summer vacation.
English Translation: Julian
« Previous Page
Translations Archive