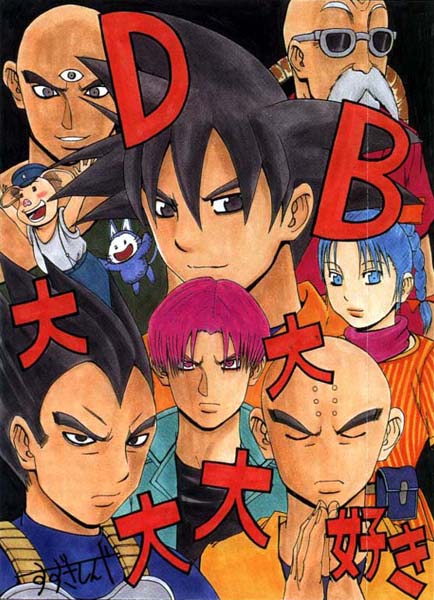 There is a me who can get lost in reading it, like a child.

Ah… Is this a dream? Now that I think about it, reading Toriyama-sensei’s work was what made me aspire to become a manga artist. I’m really happy now to be able to contribute to such a great master’s work. (It really does feel like a dream…)

I still haven’t matured fully, but in having the honor of doing a serial over in Jump, and making my name in the same field as Toriyama-sensei, I am made to realize even more strongly just how great a master he is. To me, he truly is a godlike being. No other manga has made my heart pound every week the way Dragon Ball did. There’s no way there could be.

My youth was spent going down to the convenience store first thing in the morning at the beginning of the week, getting Jump, and then heading to school.

Or rather, first I stood there and read Dragon Ball in the convenience store, and then I bought it! And, when I got to school, everyone in class was already fired up with Dragon Ball discussion. Naturally, I didn’t want to be left behind.

Death unto anyone who’d go and spoil me before I read it! If you found out what was in it beforehand, it was like at least half of that week’s enjoyment had been stolen from you. The boys of the class were always passing Jump around between them to read.

It always leaves off at a good point, that Dragon Ball… How many times did I howl, “Crap… What’s gonna happen after this…” when I finished reading…? Week after week, it would always make us kids’ hearts pound… what a cruel work it was.

Now, I have become very much an adult in age. Living a hectic daily life, I worry that I might forget that heart-pounding feeling. Then, I’m overcome by uncertainty: “Kids nowadays seem so busy with their video games, and their cram school, and their mobile phones; can they really read manga and get the same heart-pounding feeling we had back then, even now?”

Times like that, I read Dragon Ball over again. And again, and again…

Yep… it’ll be all right! Even now, there is a me who can get lost in reading Dragon Ball, which I’ve read hundreds of times, like a child.

Dragon Ball is an eternal masterpiece. That heart-pounding feeling will always remain with those of us who were once boys, never fading, no matter how many years go by.