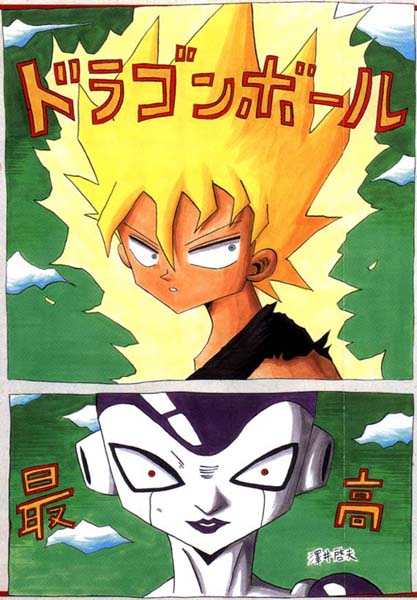 Text: “Dragon Ball is the Greatest”

Number One by a Long Shot.

To me, when I was a boy, Dragon Ball was, in all things, number one by a long shot.
If I could read Dragon Ball, it was number one by such a wide margin that I could hold off on any other entertainment.

When I was involved in a traffic accident in elementary school, I thought as I got hit by that car, “I can’t die until I read what happens next in Dragon Ball”. Although it was just a sprain. My number one attachment to life was Dragon Ball. It was the same in junior high, and in high school.

There are mountains of famous scenes in Dragon Ball. Among those, the one that gave me the greatest shock was when Nappa knocked Tenshinhan’s arm clean off. This scene gave me the greatest shock of all, by far. Vegeta was just standing back behind him mockingly, thinking that Nappa really wasn’t all that strong, so I tasted an incredible sense of despair. When I finished reading, I entered a Piccolo-type mood, thinking “Earth is doomed…”. The day I read that chapter of Dragon Ball, I was in such a state of shock that I couldn’t eat.

That was the time when I thought, “Hurry up and get here, next week! Seriously!” the most I ever have in my life.

Having become an adult in this way, looking back now, I realize that Dragon Ball took up 90% of me. If it weren’t for Dragon Ball, I believe my boyhood would definitely have been boring.

Thank you, Dragon Ball. And Toriyama-sensei.

The other day, I re-read Dragon Ball for the first time in a long while. “Ah, it’s still number one by a long shot,” I thought.

To me, Dragon Ball will forever be number one by a long shot.