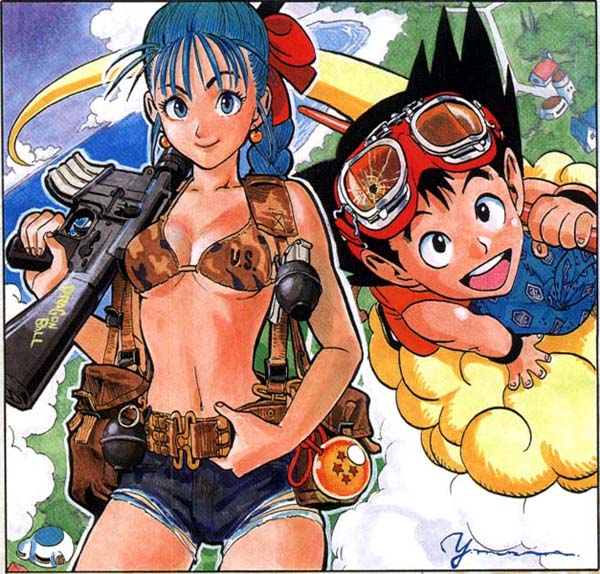 To me, Shōnen Manga was Dragon Ball.

When I was a little kid, my parents practically never bought manga for me. (They wouldn’t let me watch anime on TV, either.)

In that situation, what little manga I had a chance to get my hands on was the Dragon Ball tankōbon my friends had. That’s not a metaphorical expression, or anything: the only shōnen manga I knew was Dragon Ball, and nothing else.

And so, re-reading it now that I’m a manga artist, I can truly appreciate “how lucky a thing it was that what little shōnen manga I got my hands on during my adolescence was this work”.

When I was about six years old, the shock when I first read it was huge. The first thing that struck me was the art’s beauty, its coolness, its cuteness, its detail… it’s hardly novel, but my first thought was, “Ah, I wanna be able to draw illustrations this well.” In the 18 years since then, right up to now, my feelings haven’t changed. I think it’s fair to say now that it’s true love. I’m crazy about it. I don’t know if it’s all right to say this, but even now, having made drawing pictures my life’s work, I have to admit that I haven’t taken one step away from the realm of blindly imitating Toriyama manga. I can’t help it. It’s my origin, and my ideal.

When I was in junior high, people around me would say, “your drawings look just like Dragon Ball,” so there was a period when I intentionally distanced myself from Toriyama works. After a while, when my art style became more exaggerated, and I thought I’d forgotten the Toriyama touch to a good extent, I finally started serialization, and the touch that had been labeled “an imitation of Toriyama” returned at once.

This is really nothing other than me laying myself low. But it’s also saying that I don’t care. It’s how I was made aware just how deeply Dragon Ball’s influence was etched into my roots. Probably, from here on out, I’ll continue my work, holding Toriyama-sensei’s illustrations as my ideal. And perhaps, there will always be someone, somewhere, who reads Dragon Ball and aspires to become a manga artist.

That’s because the power of this work, which changed my life, will definitely get through to every generation.

The following translator notes are included for the benefit of the reader as supplemental information.
1Yūsuke Murata (村田雄介), born on 04 July 1978, is a manga artist best known for illustrating the manga series Eyeshield 21.
English Translation: Julian
« Previous Page
Translations Archive