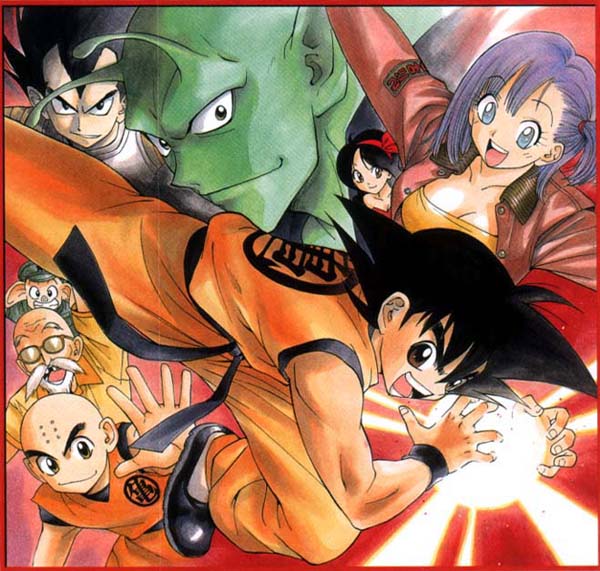 The Reason for Its Unfading Appeal

“Wow! Look how beautiful this is!”

The beautiful backgrounds. And, drawn in the middle of it, the boy so cute he would immediately grab your attention, Goku. When the colors of the first page of the first chapter reached my eyes, time stood still for me for a good long while.

From then on, I was captivated by this great adventure tale. This work, a treasure-trove of charms, was something I looked forward to so much each week that I could barely wait. Oolong, Kame-Sen’nin, Kuririn… whenever the band of companions grew, I’d get excited about what would happen next, and whenever a powerful foe like Vegeta, Freeza, or Cell appeared, I couldn’t wait for when Goku would defeat them. Even reading it again now, it hasn’t faded one bit; I feel the same as I did back then. Even while I’m reading it, I can hardly wait for the next scene.

To me, the appeal of Dragon Ball was its completely realized world, and the charming individuality of the characters. It was fun just looking at the scenery that appeared, and the cars, spaceships, and such. But I wasn’t satisfied with that, and thinking “It’d be nice if I could draw something like that,” I spent a lot of time copying them. Thinking back on it now, it may be that my feelings of wanting to draw, and my feelings that drawing was fun, began with Dragon Ball.

Then there’s the characters. Any character that appeared was so lovable and appealing that you couldn’t help but like them, and everything they did was interesting. Even enemies that normally ought to disgust you would have something likable about them, which was strange. Among them, I think the trio of Goku, Bulma, and Piccolo are my top 3 favorite characters out of any manga I know. Bulma, who was always cheerful and cute, is my image of the ultimate heroine, and Goku, who would never let you down no matter what, is the kind of main character I admire. And then there’s Piccolo, who as a villain, was stronger than anyone, and even after he became an ally, was more dependable than anybody. I still can’t forget my shock when he died throwing himself in the way to protect Gohan. I believe he will continue to be my number-one favorite character from here on out.

What we call manga is an embodiment of the images within the creator’s head. What you can feel throughout the first half of Dragon Ball is just how great and abundant the images within Toriyama-sensei‘s head are. It’s boundless. I feel that all the more strongly, now that I’m in the position of drawing my own manga. And, on top of being abundant, it’s also consistent. I believe it’s precisely because of that, that even now, years after it concluded, rather than fading away, it actually feels extremely fresh and overflowing with appeal.

No matter when, and no matter what, it will always captivate me. Dragon Ball is that kind of work.