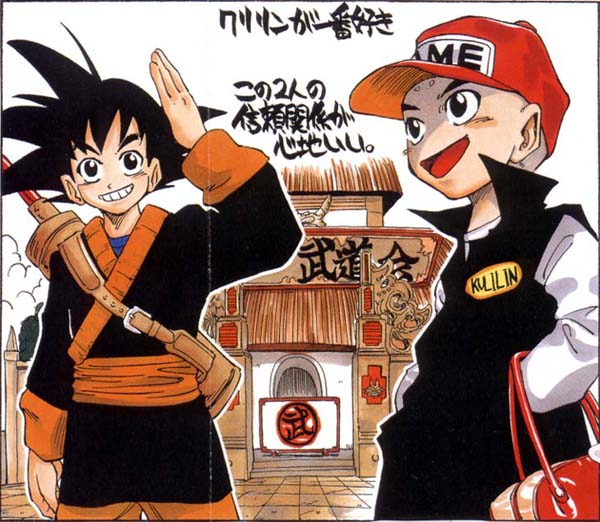 Text: “I like Kuririn the best. The trusting relationship between these two is nice and comfortable.”

In the End, I Like It Because It’s Enjoyable

Dragon Ball was on the cover of the first Jump I ever bought. I started reading Jump quite late; I think it was when I was in my third year of junior high [ninth grade]. I had hardly read any manga at all, let alone Jump. When I was a kid, my hometown of Yokohama still had things like empty lots and groves of trees, so every day, I’d do things like playing soccer or baseball, going bug-catching, sticking a firecracker in poop and blowing it up, or reading through a discarded girlie magazine; I was a pretty outdoorsy kid. But as I grew up, condominiums went up in the places where I’d played, and the kids I’d played together with went on to different junior high schools; because of that, I stopped playing outside. At that time, on my way home from junior high, someone shouted from behind me: “Kuririn died—!!”

When I heard that, my thought was, “Who?!” But the guys around me were different. “Seriously?!!” “No way that could happen!!” “Let me see, too!!” The route home from school was in an uproar. Seeing the state of excitement in these people right before my eyes, I started to feel a bit embarrassed at not knowing who Kuririn was, so I said, “Ah, so it’s true,” taking an attitude as I though I’d known who Kuririn was for ages. That incident is how I got my start reading Jump.

I simply like it. It’s simply enjoyable. When I was a kid, why it was enjoyable hardly mattered, but if I think about it now, I suppose the reason I liked Dragon Ball was the poses, and the villains. Everybody imitated the Kamehameha. The Taiyō-Ken, the Kikōhō, the Kienzan, the Makankōsappō. Whichever one you chose, it was a simple pose that anyone could do. But in spite of that, it was cool, and if you struck that pose, you felt like you could do the technique, too, and you’d practice it. Well, I really can do a Kienzan, though. Hehehe.

Which brings me to my other reason: the villains. From Tao Pai-pai, to Tenshinhan, Piccolo, Vegeta, and Freeza, they’re not just bad, they’re evil. Detestable enemies. My heart would cry out, “Dammit, who does this guy think he is? Do something, Goku—!!!” The more evil the villain, the more irresistible the exhilaration when they’re defeated.

But, even as I write that, it’s just applying it after the fact. I like it because it’s enjoyable. In the end, I think that as a fan, my entire argument boils down to that one phrase.

To me, Dragon Ball is that kind of manga.