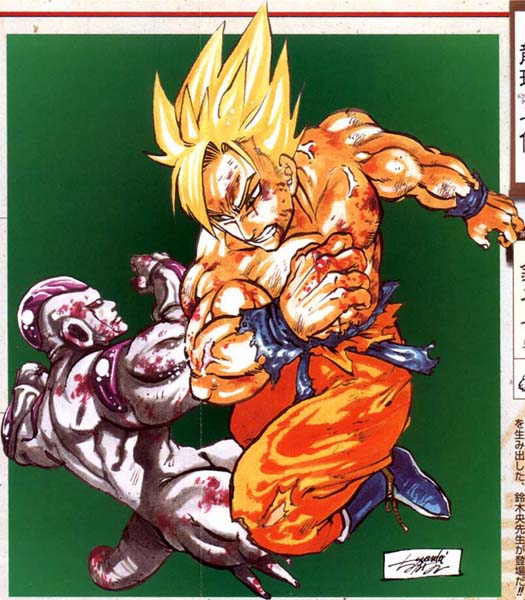 Can’t Next Week Get Here Any Sooner?

When I was a boy, my little brother would always read Jump before I did.
Actually, it’s more accurate to say that I let him read it.

Naturally, I felt the need to read it first so badly that I’d resort to stealing, but even if I tried, I would always end up reading it afterwards. Right up until the morning of the next day (naturally, I was often late for school).

Why would it take so much time to read a single magazine, you ask?
It’s simple. It’s because Dragon Ball was just too enjoyable.

An hour or two would suffice to read Jump itself, but for this manga alone, that wasn’t enough. That’s because, every week, I would read it tens of times, savoring it (from corner to corner of every panel)

I remember getting such a shock from when Freeza changed into his final form that I considered staying home from school.
The design was that simple, cool, strong-looking, and capable of making you feel overwhelming fear. And, both when I was a kid and now that I’m drawing manga, I was in awe of the power of Toriyama-sensei, who could draw that so easily.

I wanted to know the next week’s developments so badly that I would turn the pages over and over again, sighing every time.

Back then——————— “Can’t next week’s Dragon Ball come out any sooner?” Someday, I want to draw a manga people will talk about like that. Dragon Ball didn’t just allow me to have a good time, it also, if just a little, allowed me to harbor big ambitions. Thank you, Dragon Ball!!

Oh, by the way, my favorite characters are Goku and Vegeta.