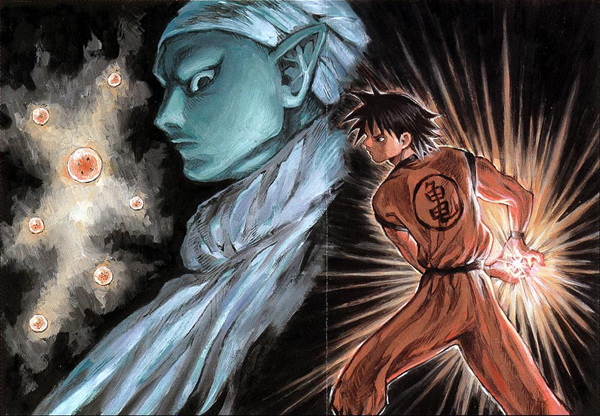 The Memorable Scene of Goku’s Defeat

When it comes to the most shocking scene in Dragon Ball…

I think that, depending on the person, a variety of scenes might come to mind.

I think there’s no end the examples you could give, but I’ll venture to bring up Goku’s defeat in his fight against T’ao Pai-pai.

Thinking about it, was this not the very first defeat for the main character of Toriyama’s manga, who possessed near absolutely flawless strength? No, he definitely lost at the Tenka’ichi Budōkai to Kame-Sen’nin’s alter-ego Jackie Chun, and barely lost to Tenshinhan2, but up until that point, he had never been defeated so utterly by someone so evil and despicable.

Of course, after that, he receives training from Karin-sama and turns the tables in an exhilarating conclusion, but at the time, I got a shock like that of being betrayed by someone I’d trusted, and Dragon Ball, which up to then had been viewed as a fun adventure-comedy, became from that point an unpredictable and suspenseful manga that you couldn’t take your eyes off of.

Personally, I believe that this in particular was a major scene that could be called the turning point in developments that came after, and at any rate, it’s a scene that left quite an impression on me. Yet, my having written so much about this when the illustration isn’t of T’ao Pai-pai is because I went and drew the illustration before writing the text.

The following translator notes are included for the benefit of the reader as supplemental information.
1Norihiro Yagi (八木教広), born in 1968, is a manga artist best known for creating the manga series Angel Densetsu and Claymore.
2He’s misremembering here, as this came after the Red Ribbon arc.
Translator Commentary: My guess is that he actually wrote the article about Piccolo Daimaō, before remembering that Goku had an even earlier defeat by an irredeemably evil foe. He then changed it while forgetting to remove the reference to Tenshinhan. That last sentence is just a lousy excuse.
English Translation: Julian
« Previous Page
Translations Archive