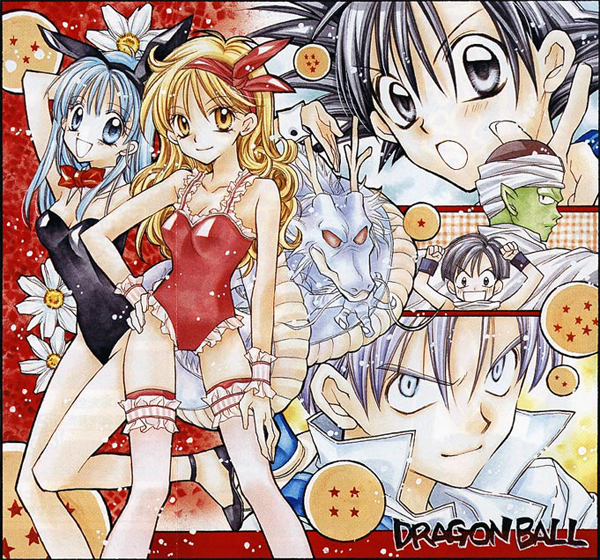 A Manga Among Manga!!

The Dragon Ball generation… I am undoubtedly a member. I started buying Jump right around when Dragon Ball began its serialization. While my older brother and I would together be excited by the weekly developments, there were also the anime, and games on top of that; thinking back on it now, I believe I truly loved it. I especially loved Bulma, and of course, Goku! That duo really appealed to me, so even after they stopped doing things together, I was so happy when there was the occasional scene of them meeting or talking that I couldn’t contain myself.

And of course, what I liked about Dragon Ball was its unexpected and appealing developments!! Goku growing up (in height), getting married, and having children (well, it’s all ordinary stuff, but I suppose it’s surprising with Goku’s character…), the Demon King and God being the same person, Trunks’s parentage, Saiyans becoming Super… anyway, it’s just wonderful!!

When I was a reader, I just simply thought it was fun! But now that I’ve had the privilege of being elevated to the same position, known as “author”, I truly respect him… or rather, I think he’s God. There really isn’t any tone or anything on the page. It’s truly simple, yet it’s gorgeous, has impact, and is easy to read. It’s ideal!

They were used in the endings of the anime as well, but I always really liked the illustrations with the characters all together. You could especially feel the love that went into the designs of cars and motorbikes Toriyama-sensei drew, and the mechs and machines he designed himself; I have not one, but two of his illustration collections. ♪

From here on out, both as an individual fan and as a humble author, I want to keep on loving it with all my respect!!

P.S. When we’re feeling sleepy at work, we play the “Yamanote Line” game2; when we do that, the category where all eight people are able to keep on spouting character names endlessly is Dragon Ball. Mm-hm, it really is incredible!!

The following translator notes are included for the benefit of the reader as supplemental information.
1Arina Tanemura (種村有菜), born on 12 March 1978, is a manga artist best known for creating the manga series Kamikaze Kaitō Jeanne and Full Moon o Sagashite.
2The “Yamanote Line” game, also called “Kokon-Tōzai”, is a very popular Japanese drinking game. The players pick a topic, such as “stations on Tokyo’s Yamanote Line”, and then each person has to say the name of something in that category in turn, without hesitating or repeating what someone else has said.
English Translation: Julian
« Previous Page
Translations Archive