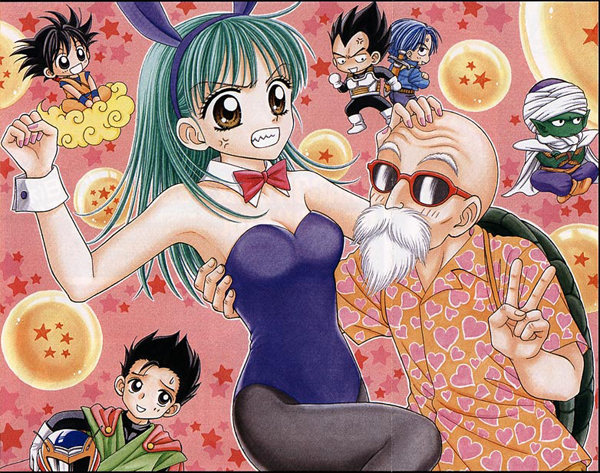 Incidentally, 3rd place and onward continue with Son Gohan, Goku, Trunks, etc… but seeing this, I think orthodox(?) DB fans will naturally raise their voices in dissent. Nevertheless, please bear with me.

To me, DB’s appeal lies not only in the impact or the coolness of the battle scenes, but also in the fun of the characters!! Just to bring up villains alone, from the early adventure gag manga period, you have Pilaf-sama, and the Red Ribbon Army… and once it plunges into a serious battle-action story, there’s the Ginyu Special-Squad (they can silence even Freeza, so they’re nothing to sneeze at!) ……If you bring up ally characters, there’s no end to them, but among them, my top two by far shine brightly—Bulma-chan and Kame-Sen’nin-sama! And, in a way, they’re the strongest?! The time when Kame-Sen’nin was called “the world’s greatest, Muten Rōshi” is long past, and along the way, he stops entering the fray, but his indomitable spirit is still alive and well. Fondling the nurse’s butt while pretending to be a senile old man… If you’re a man, you have to be this tough! As normal men go, I’d worry instead about the Son family, who are pure enough to ride on Kinto-Un even after becoming proper adults. (heh)

Then, there’s the unbeatable woman, Bulma-chan!! In the middle of life-or-death struggles on Planet Namek, how my heart softened at your worrying more about your skin than your life, or your falling for a handsome enemy…! Even in that other future, ravaged by the Artificial Humans, there you are, shrewdly surviving. Incidentally, in the story of the Trunks who came from that future, Piccolo, Vegeta, and Goku have all been killed, but I do believe, as is my wont, that Kame-Sen’nin is probably still alive. Yep.

It is precisely because there’s the support of these famous side-characters that we can catch a little breather in between the great battles of the main story… That playfulness is the hidden flavor of the DB world!?