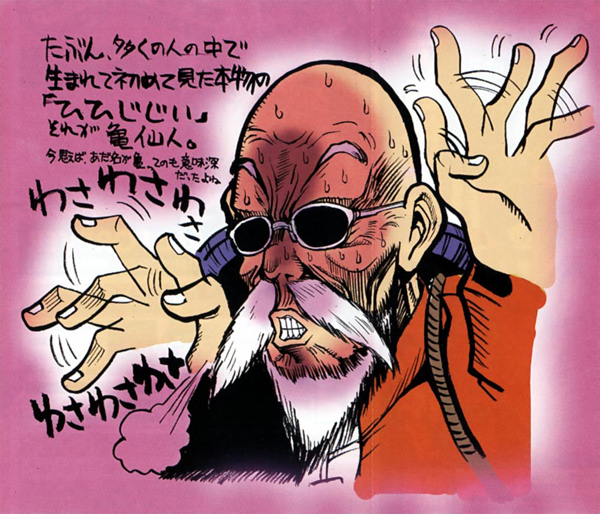 Text: “For a lot of people, the first ‘red-faced old pervert’ they saw in their life was probably Kame-Sen’nin.
Now that I think about it, my nickname being ‘Turtle’ had quite a deep meaning.”
SFX: “wiggle-wiggle-wiggle”

I Was Drawing DB

You can do a Kamehameha if you work at it.
Looking out of the corner of my eye at my classmates, who, steadfastly believing this from the bottom of their hearts, would repeat the motions of the Kamehameha again and again like mechanical dolls, I was drawing something not quite illustration and not quite manga, such as:
The Red Ribbon Army,
which depicted the Red Ribbon Army conquering the world,
Me, Bulma, and Lunch on a Southern Isle,
where I lived on a southern isle for many years, while making out with Bulma and Lunch, and
T’ao Pai-pai and Me and Golgo and a Gundam,
where, as a Gundam and T’ao Pai-pai were dueling to the death, meanwhile, Golgo 13 and I were locked in mortal combat in Kita-Senjū.

When I showed these to my friends or my classmates, they’d tell me, “Don’t draw that stuff; draw Goku, or Piccolo”, so then I drew Yamcha one-sidedly beating Piccolo-Daimaō to a bloody pulp with his Rōga Fū-Fū Ken and dominating the Tenka’ichi Budōkai 10 times in a row like a demon, or Goku transformed into a giant ape and in the middle of crushing his adoptive grandpa underfoot, and they really hated it. Such were my school years.

Also, I was always doing impressions of Freeza. Constantly. Until the teacher hit me.

Also, I was able to become a manga artist after I read Toriyama-sensei’s “Crappy Manga Laboratory”.

The following translator notes are included for the benefit of the reader as supplemental information.
1Kōta Hirano (平野耕太), born on 14 July 1973, is a manga artist best known for creating the manga series Hellsing. However, as Hellsing was published by a different company (Shōnen Gahōsha) he was presumably allowed to do this column because of his association with Shueisha for the series Gun Mania.
English Translation: Julian
« Previous Page
Translations Archive