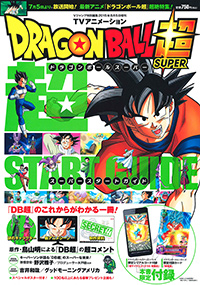 Dragon Ball Super is a complete continuation of the Majin Boo story arc. It’s got a bit of post-battle aftermath, continues with the Battle of Gods arc where the God of Destruction Beerus appears and the Resurrection ‘F’ arc where Freeza comes back to life, and then, I’ve written a strange new story where they finally depart from this universe. They’re fighting against their neighbors, Universe 6! They’ll yell at me if I give away too many spoilers, so I’ll keep the rest a secret, but they’re chasing after giant Super Dragon Balls; I think things will unfold in a bright and simple way, that will be really fun and exciting!

The following translator notes are included for the benefit of the reader as supplemental information and were not originally published in the book.
1 The message is identical to and technically originated as a part of the series’ “Completion Announcement Event” just a couple days prior, where the creative team announced their finished production on the first episode and promoted the then-upcoming series debut.
English Translation: Herms
« Previous Page
Translations Archive