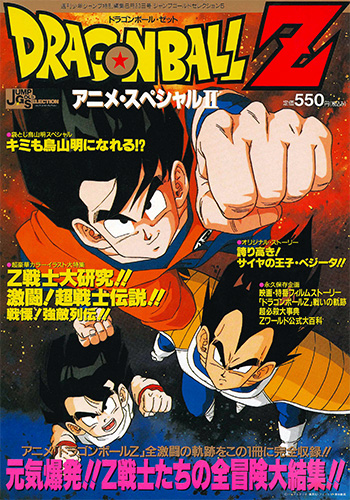 Even YOU Can Become Akira Toriyama?!
The Cartoon Classroom
Where Even Freeza Can Learn to Draw!!

It’s OK even if you’re bad at drawing?! Akira Toriyama-sensei will teach you how to draw Dragon Ball characters by level.

For those of you who really aren’t good with drawing, we recommend this beginner section. Even though it’s called “beginner”, it actually takes a pretty high level of expressive ability to let others tell who they are with simple drawings. There are some aspects that are harder than drawing realistically, but there are fewer lines as well, so you can draw them over and over to master it. For tools, a pencil and paper, plus a felt-tip pen, is plenty. First, sketch the draft with a pencil. The basics of drawing an egg-shaped ellipse, then putting a cross-shape inside it, are the same for all the characters. After that, follow Toriyama-sensei‘s advice and try to finish up a caricature of your favorite character.

[Toriyama] We’ll start with an easy way to draw.
HE’S BEGUN TO TRANSFORM!
[Freeza] *chuckles*… I have no need to even draw such things…

Toriyama-sensei‘s advice:
Son Goku’s the kind of character where even if you draw him simply, if you get the hairstyle right, you can tell it’s him. To add even more Goku-ness, “His manly, sharp eyebrows are his charm point. If the nose gives you trouble, go ahead and leave it out.” And there you have a slightly more boyish, fresh-faced Goku.

Toriyama-sensei‘s advice:
With his antennae and pointy ears, at a glance Piccolo looks hard to draw, but “The base shape is the same as for Goku. The main point is his slightly scary eyes. If you accidentally forget to draw his ears, he’ll end up looking like a bug, so be careful!” If you don’t position his eyes and mouth in the center just so, it’ll throw off the balance of his facial features, so pay attention to that as well.

Toriyama-sensei‘s advice:
The most prominent aspect of Gohan’s appearance is his being very young. So above all, the key to drawing him is to emphasize that extreme youth. To put it concretely, “The base shape of his face is close to circular. His eyes are drawn much lower than for characters like Goku.” His bowl-cut hairstyle is easy to draw, but if you make his hair too long, he’ll look like a girl. Have it stop just above his ears.

In the Intermediate and Advanced sections, there are more and more lines, but it’s not just about drawing in more detail. In order to give the sense of stability, that their heads are set firmly on their bodies… it’s important to really get down the basic lines at the start. Finally, in the advanced section, try challenging yourself to a side-facing caricature.

[Toriyama] Don’t throw it partway through, and throw all your energy into it.
[Freeza] While there’s no real reason… why don’t I get started drawing?

Toriyama-sensei‘s advice:
In order to properly express Goku’s sturdy build, make Goku’s shoulder line broad. The key is to also draw his head and neck similarly wide. Then, on his upside-down triangle-shaped face, draw his eyes and eyebrows large, and with his chin as the focus point, you should draw his hair as though it’s exploded all over the place. “He’s not the thinking type, so at any rate, it’s good to make him look energetic,” apparently.

Toriyama-sensei‘s advice:
Compared to his large head, his eyes are placed unexpectedly low, so be careful. “His nose looks like it’s bent to the left, but that’s to express his nose’s shadow. Because of that, when the light is coming from the left, it has to be bent to the right. Only, the author often gets it wrong, so he should pay attention” to that…? I had no idea…

Toriyama-sensei‘s advice:
He has a scary expression, so he looks like he has a completely different facial structure from Goku, but actually, “Goku’s, Piccolo’s, and even Vegeta’s faces are all basically drawn the same way. If you change the eyes and the hairstyle, he can even change into Goku! And if you change just the hairstyle, he’s Super Saiyan Goku!!” …R- really?!

[Toriyama] Lookin’ sharp! It’s done!
[Freeza] Now then, allow me to show you my drawing!!

Toriyama-sensei‘s advice:
“The truth is that the author just suddenly draws a sketch of the character in that state, but I think that would be difficult for all you readers, be especially careful of the facial outline as you draw.” Yes, apart from there being more line detail, the outline itself is almost entirely the same as the intermediate-level Goku. You can carefully draw in the more detailed parts afterward.

Toriyama-sensei‘s advice:
“I know I’m repeating myself, but the basics are exactly the same as for Goku. Unlike actual humans, in this comic the eyes, nose, mouth and such are all drawn really low when you look at the entire face.” On top of that, his forehead juts forward and his chin pulls back, which gives the impression that he’s looking downward. From there, if you make his eyes look like he’s glaring upward, it’ll be really intimidating.

Toriyama-sensei‘s advice:
“This character, who looks easy at first glance, is actually relatively difficult, so be careful. The most troublesome part is the eyes!”