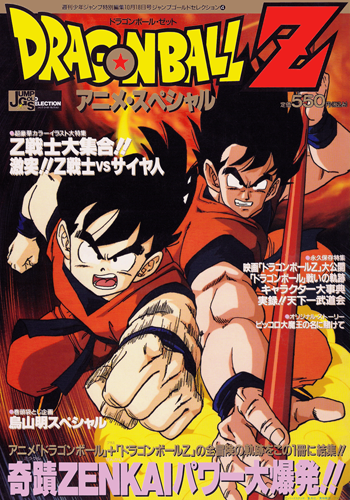 We asked eight members of the staff

Making the anime is tough, but enjoyable?! Now, let’s listen closely to the various stories the staff have to tell about Dragon Ball and Dragon Ball Z!

Its rival is Indiana Jones?!

The first animated program I handled after I joined this company was Dr. Slump ― Arale-chan. It was a work with an extremely good tempo and dry humor, but moving on to Dragon Ball, the story aspect is much, much stronger. So at the beginning, we were worried about the ratings (laughs), and perhaps because of that, the first episode made a really big impression on me.

Naturally, the ratings were incredibly good, and it’s watched by three-year-old children up through housewives in their forties. This breadth of age groups is just amazing.

I’ve had the pleasure of being a producer from the middle of Dragon Ball onward, and I believe that this series is a work that can compete with even the Indiana Jones movies.2 It’s exceptionally well-paced and rhythmical, and you can enjoy it while following the story. This might even be the only animation that’s drawn with such dry sensibilities.

First, the original manga is strong, and on top of that, when it’s made into animation, it’s also precious in the sense that you can really feel firsthand that sense of speed.

And also, there are parts hidden in the anime that weren’t in the original comic, but were added in by Toriyama-sensei, so by all means, please look out for them.

The producer is a chef to the original work

To be a producer is, essentially, to be a chef: “How do I take the elements given to me, and cook them up so that the viewers will eat it up with relish…?”

I’ve been going about it thinking that way since the time of Dr. Slump, but the younger staff also completely understand Toriyama-sensei‘s world, and people with good sensibilities, like Nishio-kun3 have been brought up. Even after it became the action-packed Dragon Ball, I’ve kept on thinking on how to hone a world with a different flavor of heart-pounding excitement from Dr. Slump.

After that, at the point where it got to Z, where the action stands out even more, I handed the baton off to Morishita-san4.

What shocked me in the story of Dragon Ball was when Kuririn first died; it was like, “This isn’t like Dr. Slump anymore.” He dies because of Goku, and it’s a really heartrending part. Nozawa-san5 also got into the performance to the point that she was sobbing, and I was really happy with it then.

Also, when there was talk that, even the anime-original segments were done well enough that they could probably rival the manga, I was glad that the hard work the entire staff had put in was really worth it.

Partway through Saint Seiya, I started handling Dragon Ball alongside it, and after that, I took the reins from Shichijō-san. Seiya had a lot of emotional bits, like with friendship, but Dragon Ball, on the other hand, gradually allows you to feel it as the story goes along. It was quite interesting for me to be able to keep working on these two different kinds of works from Shueisha.

Both of the works that they’re based on have impact, so even keeping up with them was incredibly tough. (laughs) It’s actually more difficult to make something based on a popular work than it is to make an original story.

With Z, there are also new characters, and we’re really putting an effort into depicting Gohan. So, we made a lot of stories with Gohan, but it really is about “Goku!”, isn’t it. My own son also watches every week, so I learn a lot from that, (laughs) but it’s all about intense action with Goku. Animation is visuals, after all, so we have to make stories that will work visually.

By the way, from Episode 22, which airs in October, the opening will change a bit to go along with new plot developments.6 Please don’t miss that, either.

I had the privilege of writing scripts around when Dragon Ball began, and then I moved over to Saint Seiya, so by the time I came back over here again, it was already Episode 132, and Goku had become a young man. (laughs) Since then, I’ve been working on Z as well, as Series Organizer in addition.

Series Organization means to go on structuring the series by determining how many episodes of the anime will cover a particular chapter of the original work. Even so, we’ll inevitably catch up to the manga, so whenever that happens, we’ll also add in original episodes while making arrangements and such with Toriyama-sensei.

In terms of the way of making the gags as well, I do escalating gags, or rather, I make each gag run into the next, one after another, but Toriyama-sensei‘s gags, on the other hand, are more restrained, and good at getting you at just the right point. So, at the time of Dr. Slump, I was taught by Shichijō-san that “you don’t have to force the laughs”, and that was just an incredible culture-shock. (laughs) In Dragon Ball as well, I’ve been keeping the scenarios more restrained, but even so, the original manga is good, so it’s interesting enough as it is.

The emotions are realistic, so I take pains to express them

The second episode, right when I’d just started, has left the strongest impression on me… that’s because it was the first episode of Dragon Ball that I directed. Suddenly, I was in charge of an important story, and it was just tough figuring out what I should do. (laughs) Episode 5, with Yamcha’s first appearance, also left a deep impression, but his character was easy to understand, and the spots where Yamcha appeared after that were easy to do. Although now he’s moved into a supporting role. (laughs)

Also, I like relatively large characters, like Sergeant Metallic, or Hatchan. That’s because there’s an atmosphere where they can just naturally exist in Toriyama-sensei‘s world.

My episode-directing debut was with Dr. Slump, so I’ve been involved with Toriyama-sensei‘s works since then, but I try for us to interpret the original manga, and follow along with it as best we can. However, I believe Dragon Ball is a work that is emotionally realistic. There are emotional ups and downs, and there are things like emotions as a motive for expressing something. Because of that, it’s difficult to express those things.

Recently, the people who do the direction and the art have been working to pull the original manga into their own territory, so the power of the animation is amazing.

The first time I handled Animation Supervisor duties on a TV series was with Dr. Slump. “This manga’s illustrations are really good,” I thought, and I told the people doing key animation that I wanted them to draw faithfully to the original manga. (laughs) I’ve been pulling on that along all through Dragon Ball as well, and I think we’ve managed to do it, but at one point, Toriyama-sensei pointed out to me, “Gohan doesn’t look like that in profile.” Then I looked at the character illustration of Gohan that I had drawn, and I thought, “Ah, I see now.” (laughs)

The characters now have more dimensionality to them than they did at the time Dragon Ball started, and that’s even true of their musculature and such. So I bought a book on bodybuilding, and I’ve been drawing using that as a reference. (laughs)

Even so, I couldn’t draw Ma Junior well (laughs), and as a result, he left an unexpectedly weak impression. I suppose the reason why Goku is easy to draw in contrast to that might be because I’m obsessed with how to express Goku’s manliness.

Drawings have a tendency to get sloppy in fight scenes, but Toriyama-sensei‘s art is clean, isn’t it. We also would like to work hard like that and raise the level of our work.

The very beginning, where Goku set out on his journey, was something new

If you ask me which I like better, I prefer early Dragon Ball. Goku sets out on a journey in the first episode, camping along the way, and meeting a variety of characters, right? Chi-Chi, the Red Ribbon Army, and such. That part had unexpected developments, and even directing it, it was fresh and interesting.

Now, the original manga has become more hard-edged, and its image has changed; just thinking about how to express the sense of speed and the power can be a bit rough at times. (laughs)

It’s my job to show panels of manga as moving animation, but abstract things and such are difficult. For instance, how to express things like ki and auras in animation. Everyone uses transmitted light photography, after all, and even saying we should go for an even more unusual pattern, it’s not exactly easy. (laughs)

It would feel like there’s something missing if it were just scenes of fighting, so after the battle with the Saiyans finishes heating up, next I’m hoping for more completely different, fresh developments. With more dreams, and fun… or rather, making it fun is the job of the director (laughs), so I’d like to keep doing my best.

The backgrounds have also changed along with developments in the story

At the time of early Dragon Ball, I was also doing the backgrounds for Silver Fang: Shooting-Star Gin alongside it, so I was only able to handle about half of the backgrounds. And then it was around the 100th episode, give or take, that I started doing all of them over here.7

At the beginning, I aimed for backgrounds with a Chinese-style transparency, and also depth, in accordance with Toriyama-sensei‘s wishes; however, they turned out more like fairy tale-style, Chinese-landscape paintings, without much sense of dimension.

But as the action-type elements became stronger, the art design would also have to change, and the art came to be more realistic, with a sense of depth. Bright, but a sort of imposing power of its own. Except things like Kame House have the same atmosphere as they’ve had up till now, though, so there might be some dissonance there. (laughs)

The work of the Chief Designer is mainly art design, but I have a realistic touch when I draw things myself, so it’s my aspiration to draw more of a fairy-tale world. (laughs) The backgrounds are an anime-only original, and everyone works as hard as they can at making them, so please take a good look at them.

The following translator notes are included for the benefit of the reader as supplemental information and were not originally published in the book.
1 “Love Call” is Japanese-English for expressing your heartfelt feelings towards someone or something, over the phone or in writing. In this case, it’s Dragon Ball, hence the name “Dragon Call”.
2 This comparison was quite topical in 1989: Indiana Jones and the Last Crusade had just come out in theaters that summer.
3 Daisuke Nishio, Dragon Ball TV series and movie director
4 Kōzō Morishita, …
5 Masako Nozawa, Goku and Gohan’s voice actress
6 The animation update to “CHA-LA HEAD-CHA-LA” beginning with Dragon Ball Z Episode 22 showcases Gohan running along Shenlong’s back as well as ghostly images of Nappa and Vegeta walking through a fiery background
7 Studio YS
English Translation: SaiyaJedi
« Previous Page
Translations Archive