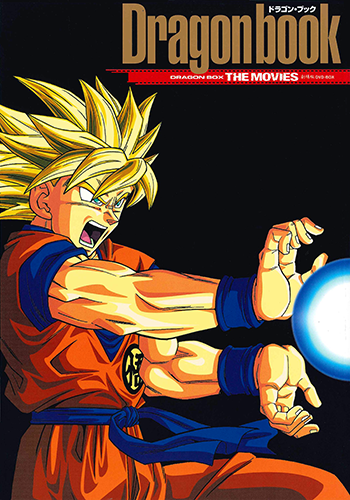 Takao Koyama-san handled the scenarios for the movies Dragon Ball Z through Dragon Fist Explosion!! That very Koyama-san cooperated with us to get at the secrets of the theatrical movies’ stories!!

How did you create the original stories for the theatrical movies?
When we made the episodes for the theatrical features, first the scriptwriter, the producer, and Toriyama-sensei‘s supervising editor would get together, and meet about story concepts, such as what to do about the main villain. Then I would put together a plot based on the content of what we’d talked about. I’d send that plot to Toriyama-sensei and get his opinion on it, then start writing out the scenario — that was the typical flow. Once I got to writing, I’d be joined at the hip with the producer.

With regards to the contents, there was the restriction that the movie “not progress into story settings further ahead than the TV anime at the time of its premiere”; for example, even if I’d decided to do fusion, I wouldn’t be allowed to do it ahead of the TV anime or the original manga.1 So I’d always be conscious of its state of progress on TV, and if we were doing the Freeza arc in the TV anime at the time of the premiere, a story would be born with the sense of, “Let’s bring out Freeza’s older brother!” Except, at times such as when the state of production on the TV anime caught up to the original work, it would be extremely tough with nothing to use as hints, and I received ideas directly from Toriyama-sensei.

It would take about three months’ time from the planning stage until the completion of a single movie’s scenario. Dragon Ball Z had two movies shown each year, in spring and summer, so that works out to me having been writing a theatrical movie scenario for over half a given year at the time. (laughs)

Why is there no sub-title for the fourth theatrical feature, Dragon Ball Z?
There’s no reason in particular. It’s simply because it was the first theatrical work as Dragon Ball Z, and it wasn’t decided at the time of production whether there would be sequels. So, with regards to this work, we (the production staff) didn’t even consider giving it a sub-title. None of us would have thought that we’d end up making a whole 13 after that. (laughs)
What are the name origins for the movie-original characters?
Garlic Jr. and his group from Dragon Ball Z are spices. They’re as-is, but the roots are garlic (nin’niku), ginger (shōga), cinnamon (nikki), and Japanese prickly ash (sanshō). Also, their respective battle-cries are linked to foods that use their namesake spice. For instance, Garlic Jr.’s henchman Sansho’s battle-cry is “Unajū~!” (“Eel over rice!”). (laughs)

For The World’s Strongest Guy, it’s a series of specialties from Toriyama-sensei‘s home of Nagoya: from uirō, Nagoya Cochin, Kishimen, and fried prawns (ebi furai). Incidentally, I got the name of the Tsurumai-Tsuburi Mountains from Nagoya’s “Tsurumai Park”.

Tullece’s group is bean-type: Cacao, soy(a) (daizu), almond, raisin2, and peanut (rakkasei). If you link together the names of Slug’s squad, you get the Andromeda Galaxy (Andoromeda Seiun). (laughs) Apart from Zeiun, you take the first two characters, and Zeiun is from “nebula” (seiun).3 Also, Slug is English for “slug” (namekuji). The names for Namekians in the original work are slug-type, so I must have been conscious of that when I named him.

Coola from The Incredible Strongest vs. Strongest actually has his origins in Shizuoka dialect. At a time when I was worried because I couldn’t decide on the enemy’s name, the Shizuoka-born producer said the word for “eat” (taberu) in dialect as “kuu ra”, which settled the name. (laughs) Since he’s Freeza’s elder brother, I made his subordinates into a salad-dressing squad of things like Thousand Island and mayonnaise, on the theme of items that would go into a refrigerator. Bojack and his group from The Galaxy at the Brink!! form the four-character phrases “bōjaku-bujin“4 and “gokuaku-hidō“5 when they’re linked together. (laughs)

I would decide on a theme for movie character names like this, one film at a time, and endeavored to make the names as elaborate as possible. If the one sending it out doesn’t have any playfulness through things like this sort of naming, the “let’s-be-friends” beam won’t come out from the screen to reach the kids in the theater. (laughs)

Why is Kuririn dressed as Piccolo in The Dangerous Duo!?
That was having fun breaking down one type of story pattern. I suppose you could call it fanservice, as well. Piccolo always shows up looking cool, standing on the top of a tower or something with his cape flapping in the breeze, right? I wanted to let Kuririn do that once. I’d let the audience think, for an instant, “Piccolo’s come!” and then have it actually be Kuririn.6 (laughs) Whenever this sort of gag succeeded, including things such as direction, it was exhilarating to me as the scenario writer.
Why did Broli come back three times?
Because he’s the strongest. (laughs) Even including the TV anime, nobody exists in the world who’s stronger than Broli. I mean, even Vegeta, Prince of the Saiyans, was trembling in fear. (laughs) I felt that there’s no way that kind of mightiest being would die in a single outing. After all, there were kids who cried at Broli’s overwhelming strength when they saw Burn Up!! at Shueisha’s preview screening. (laughs) It’s always difficult coming up with an enemy for Goku, because I’d constantly have to escalate their strength. So, he ended up appearing three times.

This is true of Broli as well, but Goku & co. are always fighting against “an unbeatable foe”. Goku must win against such an enemy, so he has no choice but to defeat him when his enemy becomes overconfident and creates an opening. There’s absolutely no way he’d be able to win against someone like Broli if he used more orthodox methods.7 (laughs)

Goku owned a suit…?
He’s worn it once. Perhaps Chi-Chi bought it for him at the department store… (laughs) The original comic and the TV show focused on battles, so episodes about the everyday life of Goku & co. aren’t depicted much. So, as an element special to the movies, I actively inserted scenes of Goku & co.’s everyday life, which couldn’t be seen on TV. After all, Chi-Chi going shopping at the department store, and Goku going to the parent interview for a test-prep school, are things you can’t find in the original comic. (laughs)

Also, I think Chi-Chi’s even more of an “education mama” than she was in the original comic. That was a reflection of the “education mama” and “entrance-exams-are-everything” zeitgeist at the time the movie opened; I thought kids at the time would feel better if they heard Goku’s message of, “It’s fine as long as he’s healthy, ain’t it?”. Because the kids who came to see the movie might have had a home environment similar to Gohan’s. (laughs)

Is it true that the Shinseiju (“Tree of Godly Might”) that appeared in Super Decisive Battle was Asian Ginseng?
It’s true. (laughs) The idea for the Shinseiju, which sucks up all the nutrients from the land, was born of a hint I got from the Asian Ginseng, which grows by sucking up nutrients from the field. It was a suggestion of the producer’s; it was really fortunate that he just happened to bring in the Asian Ginseng that he had received as a gift to a planning meeting. (laughs)
Why was Videl picked to chaperone Goten and Trunks in The Dangerous Duo!!?
This was a matter of balance. Rather than just Goten and Trunks, having a girl involved would make dialogue between the characters livelier, and the story would be easier to create. So, for the purposes of the story setting, the dart fell right on Goten and his rival-in-training, Videl.

Also, with just the two kids, Goten and Trunks, they’d almost certainly be goofing off the whole time, and the story wouldn’t go anywhere. (laughs) So, by adding Videl, who is like a sister to the pair, I got her to pull the story forward. Plus, it was nice how, thanks to Videl having Satan as a father, it was easy for me to use him as I pleased. Satan, whose bad luck seems unusually strong, was a character I prized for his ease-of-use in developing the story.

Why did Gohan and Goten become the leads along the way?
This was an overlap with the original comic. In the theatrical features, I had to write stories in this world, but at the time, Goku was dead. (laughs) We couldn’t very well have Goku be dead in the original comic and on TV, but alive in the movies. So, if Goku was in the hereafter, I felt there was no choice but to have Gohan and Goten, who were in this world, do their best.

Even so, there would probably be people who wanted to see Goku on the screen. So, in the spirit of fan service, I’d make just a single shot of a scene in the afterlife. Like the last shot in The Galaxy at the Brink!!8 (laughs)

Vegeta got weaker in the movies…?!
In the last of the theatrical works, I purposely brought low Vegeta’s status as the “Prideful Prince of the Saiya”. Because of that, he became a bit of a pitiful Vegeta; I guess I might have done something bad to Vegeta-fans. (laughs) But this is because it was a major premise of the tale that Goku has to win in the end, so perhaps it couldn’t be helped that he would inevitably be contrasted with Goku….

But I believe that, to the same extent, I was really able to depict an image of the everyday Vegeta. The scene where Vegeta, who once went around causing destruction, tells off his foe with, “How dare you destroy someone else’s house?!” shows an unexpected side of him. (laughs)

The following translator notes are included for the benefit of the reader as supplemental information.
1 There are the occasional instances that go against this, perhaps most notably Dende already in the role of Earth’s God in the sixth Dragon Ball Z film in March 1992, whereas this does not happen in the manga until chapter 393 in October 1992!
2 A raisin is a dried fruit, not a bean… though it does grow on a vine.
3 The naming oddity here comes from the fact that the Andromeda Galaxy was originally believed to be a very large nebula, and the name stuck long after its true nature was revealed.
4 “behaving outrageously as though there’s nobody around”
5 “heinous and inhuman”
6 The film even uses a musical cue from Dragon Ball Z movie 8 where Piccolo shows up.
7 Suggested further reading: Koyama’s 2013 blog post comparing Beerus from the then-new theatrical film Dragon Ball Z: Battle of Gods with Broli. This post would be coined by Japanese fandom as Koyama “dissing” the new film and character.
8 Kicking of the climax of the ninth Dragon Ball Z film, Goku — someone who has otherwise been dead and watching from the afterlife the rest of the film — briefly teleports to the world of the living (against the rules!) to save his son Gohan and offer words of encouragement. Koyama may also be misremembering/misattributing a scene from the eleventh Dragon Ball Z film where Goku comments on Broli’s apparent rampage in Hell, and that he must go take care of the problem; while the twelfth film did ultimately deal with the afterlife in chaos and old villains returning, Broli was not among them.
English Translation: SaiyaJedi
« Previous Page
Translations Archive