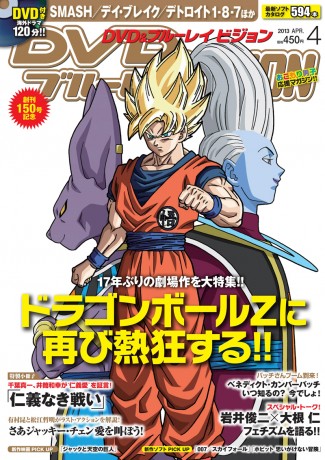 INTERVIEW
Theme Song & Insert Song: FLOW
Formed in 1998. A mixture rock band that made its major debut in 2003 with the single “Blaster”. A five-man unit, with KOHSHI and KEIGO on twin-vocals, TAKE on guitar, GOT’S on bass, and IWASAKI on the drums. They have also handled a large number of anime theme songs, such as Naruto and Eureka Seven AO.

You are all from the generation that experienced Dragon Ball directly, is that right?
GOT’S: The first Weekly Shōnen Jump I ever bought was the issue where Dragon Ball started its run.

KOHSHI: I was influenced to the point that I drew a manga called “Fireball” when I was in elementary school. Although, it was a story where your wish would be granted when you gathered the seven Fireballs. (laughs)

TAKE: I remember well how the intro “CHA-LA HEAD-CHA-LA” played right after the 7 o’clock news update.

And now you’ve covered that song !
KOHSHI: That was some serious pressure. (laughs)

KEIGO: But we were really happy about it, so we wanted to give our all on it.

What were you particular about with the arrangement?
TAKE: We paid attention to the way sound is used nowadays.
We hear that Yukinojō Mori, the original lyricist, even came to the studio.
TAKE: Well, he’s often done things since back when we made our debut; when we had him listen to the finished song, he told us, “Well done, FLOW.”
So it got his seal of approval!
KOHSHI: “HERO: Song of Hope”, an original song of ours, is the insert song; the scene where the song would play had already been determined, so we watched video of that scene beforehand1 and then wrote the lyrics. I think it’s a song that you can really plunge into.
Have you all seen the completed film Dragon Ball Z: Battle of Gods, as well?
KEIGO: Characters that I’d seen before appeared, so it was nostalgic.

TAKE: [The part with] Pilaf was pretty sick2. (laughs)

KEIGO: I was glad that it had those sorts of elements from early on, too.

KOHSHI: But the instant the insert song started playing, I came back to reality. (laughs)

KEIGO: Our nerves took flight. (laughs) It was the first time we’d had the privilege of doing an insert song.

GOT’S: So, I want to see it once more at my own leisure. (laughs)

By the way, I feel as though IWASAKI-san hasn’t said very much….
KOHSHI: Because he’s the only one from a different generation. (laughs)

IWASAKI: No, I watched it! Except, when the anime started, I was already right about in my first year of high school, I think.

So rather, Toriyama-sensei‘s previous work, Dr. Slump — Arale-chan, left a deeper impression?
KOHSHI: Before, at the part where Arale-chan appeared in Dragon Ball, he got really excited. (laughs)

IWASAKI: I prefer that sort of Toriyama thing, where there’s a lot of poop. (laughs)

All: (bursting into laughter)

Her voice knows no age!! The voice-actress behind Goku, Gohan, and Goten
Masako Nozawa Interview
Made her debut as a child actor. Has been active as a voice-actress since the dawn of the voice-acting profession. Apart from the Dragon Ball series, she has played the lead role in a large number of works, such as GeGeGe no Kitarō and Galaxy Express 999.

This movie feels like, this is the Toriyama World

I truly grew up with Dragon Ball
Scriptwriter
Yūsuke Watanabe Interview
Born in 1979. Made his debut with the NTV drama Cherry while still a student at Waseda University. Afterward, he has had a hand to a variety of dramas and movies, such as 20th Century Boys and GANTS. This work is his first anime. Gatchaman is also slated to open this year.

What did you think about receiving the request to script this time?
“Seriously?!” was my first thought. It was a surprise that they would be doing one more movie now, and that they would be having me write the script instead of an anime scriptwriter; it was a feeling that was full of exclamation marks.
Did you immediately answer that you’d take it?
I immediately answered. I thought if it were to be written by another scriptwriter, say, someone else in my generation, I’d go mad with envy, so I took the honor of doing it.
In other words, you have a strong affection for Dragon Ball.
I remember it even now, but before my graduation ceremony from kindergarten, Dr. Slump — Arale-chan ended, I saw a preview that said Dragon Ball would be starting next time. So I watched Dragon Ball ever since I was a first-grader in elementary school.
How did you make use of that affection this time?
I really like Vegeta, and I believe Vegeta is the “shadow-star”. Vegeta has complexes and conflicts, don’t you think?
Certainly, compared to irrepressible Goku, he is quite conflicted.
Goku has no worries. (laughs) Vegeta is brimming with worries, and from the perspective of the scriptwriting side of things, that’s incredibly interesting. This time, Vegeta plays a large role, so I think it’s imbued with my affection.
The scene where Vegeta casts aside his pride for everyone’s sake was shocking. To think he’d go that far. (laughs)
I thought people might even get angry at me, but in the video, it was even sillier than I’d imagined. (laughs) But in the story Toriyama-sensei made, Vegeta was supposed to waver, and there’s even a moment where Vegeta briefly surpasses Goku because he’s got something to protect in Bulma, so that silly scene was also necessary as a lead-in to make it stand out.
What sort of work was it making the story with Toriyama-sensei?
First, I’d create a story suggestion with concepts such as Beerus, God of Destruction, in it, and have Toriyama-sensei look at it; Toriyama-sensei got into it, saying, “Well, how about this sort of story?”, and would make it even better like that. Since there were length considerations, I would sort of stretch that out and make it into a script.
So you had a rapport sort of like a game of catch.
We went back and forth two or three times.
Were there any ideas that made you think, “as expected of Toriyama-sensei“?
The story I received was about 60 minutes, so I created a development where the Dragon Balls are stolen by a group of thieves, who were new characters. Then Toriyama-sensei told me, “Since we’re going with an all-star cast, let’s have the Pilaf gang steal them”. With this change, the feeling of a reunion, or a special, was upped even more. Also, I felt that being able to create characters that aren’t necessary in terms of the story, but still interesting, is something only Toriyama-sensei can do, and no ordinary idea.
Was having characters old and new all together an idea that was there from the start?
I thought I’d do a story where the enemy appears at a party on Earth when Goku’s not there, and there’d be big trouble; in the original plot, I wrote Kuririn and No. 18’s wedding, but in the story that came back from Toriyama-sensei, it had changed to Bulma’s birthday party. I think, with regards to Kuririn and No. 18’s wedding, it’s probably something that he wants all the fans to imagine for themselves.
It seems like it would be difficult to write so many characters.
I didn’t struggle at all with it. I truly grew up with Dragon Ball, so I was steeped in [the feeling of], ‘at this sort of time, this person would move like this’, and the dialogue was so easy to write that I couldn’t help it.
Was it difficult to create the strongest foe ever in Beerus?
Actually, I had been thinking since before that perhaps the Saiya had had evil planted in their hearts by someone. That was Beerus, God of Destruction, from this [movie]; it was something that I’d been thinking about since way, way back, so I managed it relatively quickly.
He’s not only scary, but a god who also has a screwy side to him.
That was an element created entirely by Toriyama-sensei. I can’t write that. I felt that that kind of character, where you’d be in serious trouble if you came in contact with his wrath, was really like him. I had made Beerus more of a bad guy, and a kind of story where everyone is taken over4 and given an evil heart, but Toriyama-sensei in his way apparently felt that, “It’s after the earthquake5, so I want it to be, not a tragic story, but a positive one,” and it came to have its present form.
How was it seeing the finished product?
Even with respect to the action scenes, because of Toriyama-sensei‘s feeling of “I don’t want to depict destruction after the earthquake”, not a single building is destroyed. I also thought that idea was incredibly wonderful, and the action scenes where no buildings are destroyed were, contrary [to what you’d think], amazingly cool.
Even without destruction, they were super-flashy.
They go deep underground and into space; I thought it was awesome.
What other scenes should we look out for?
The first thing I thought when I got the offer was that I’d be able to write the line, “Heya! I’m Goku!” [Ossu! Ora Gokū!]. (laughs) It appears in the movie as well, so by all means, I’d like you to see it!

The following translator notes are included for the benefit of the reader as supplemental information.
1 Based on what the band has said in other interviews, it was likely an animatic or animated storyboard.
2 The original word here is yabai, which means “bad”, but it is used in a good way.
3 i.e., he was just shot, but is not acting like it.
4 i.e., brought under his spell / brought over to his side.
5 The 2011 Tōhoku earthquake, which also resulted in a tsunami and damage across Japan. Many artistic and entertainment projects that depicted devastation were either canceled or adjusted in Japan.
English Translation: SaiyaJedi
« Previous Page
Translations Archive