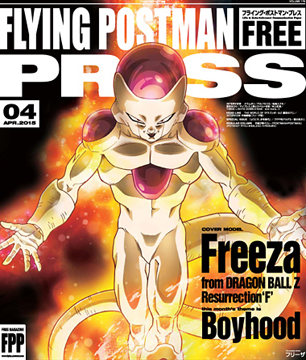 From his experience in the planning stage to his thoughts on the finished movie, Toei Animation producer Norihiro Hayashida discusses the film’s appeal.

Was it decided right from the planning stage that Akira Toriyama-sensei would be writing the script for this film?
The 2013 film Dragon Ball Z: Battle of Gods was a big hit both in Japan and overseas, so we realized once more how incredible Dragon Ball is. After the last movie premiered, the momentum was high to go make another movie without leaving too big of a gap between the two, but it was decided to have Toriyama-sensei write the script next. We conveyed just how strongly everyone involved felt about it, and Shueisha and Toriyama-sensei gladly agreed.
So it was Toriyama-sensei’s idea to bring Freeza back to life?
That’s right. Apparently when he heard the song “F” by Maximum the Hormone he went “of course, Freeza!” and hit on the idea of writing a story where the evil emperor Freeza was resurrected. Freeza’s a character who really stands out even amidst all the other enemy characters. He’s a character with an intense sense of individuality. One of his distinguishing features is the interesting conversation scenes before his fights. For instance, with the other enemy characters like Vegeta, Cell, or Majin Boo, the conversation parts were usually relatively serious, but Freeza was different. Even if the content of what he was saying was serious, he’d still phrase it in a unique way, so it was fun to listen to. (laughs) While reading through the script that he wrote this time, I realized once more how skilled Toriyama-sensei is at phrasing lines. The dialogue between Freeza, Goku, and the rest of the Z Warriors is really funny. And he’s good at carefully weaving in foreshadowing. Toriyama-sensei truly is a extraordinary storyteller. Seeing how incredible Toriyama-sensei is, I think the entire production staff was united in their desire to turn his ideas into a reality.
How are the battle scenes? Besides Freeza’s dramatic evolution, I’m sure Goku and the others likewise master a new dimension of strength, leading to a stupendous battle.
Speaking of Freeza’s previous battles, I felt like there were always long conversations, but then once the fighting started it was over in a flash (laughs), but this time things are different. After all, Freeza’s fighting with all the feelings of “I must defeat Goku no matter what” that he’s built up over many years, so that on its own should get you some incredible battle scenes. And the director this time, (Tadayoshi) Yamamuro-san, spent many years practicing Shaolin martial arts. (I even studied martial arts myself, back when I was a student) So thanks to that, the thrusts, kicks, sweeps, blocks, etc. in the battle scenes are all depicted realistically, with the accuracy that comes from someone having personal martial arts experience. What’s more, with the music of Norihito Sumitomo-san (who was once nominated for the Japan Academy Prize for Outstanding Achievement in Music) played over the images, the sense of realism goes even higher. This results in stupendous, lifelike battle scenes.
With the script, visuals, music, and various other elements all at a high level of quality, my expectations for the completed film are getting higher and higher.
Definitely look forward to it. Not only is Toriyama-sensei trying his hand at scriptwriting for the first time, but we’ve got Yamamuro-san making his directorial debut as well. In fact, while I’ve worked on numerous TV series, this is my first time producing a film. Maybe that’s why this movie has the same sort of momentum as an initial impulse. No doubt about it, I think we’re going to deliver an incredible film.
Norihiro Hayashida
A producer affiliated with Toei Animation. His major animated productions include Hell Girl (2005), Hatarakiman (2006), Nodame Cantabile (2007), Toward the Terra (2007), and Moyashimon (2007). He has also worked on the Majin Boo arc of Dragon Ball Kai (2014).
English Translation: Herms
« Previous Page
Translations Archive