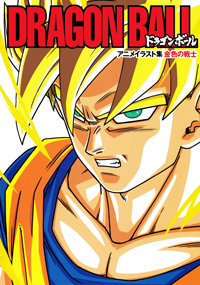 Dragon Ball Back Then Vol. 1

“I adore Toriyama-sensei’s drawings. That’s why I’ve been very happy being able to draw pictures for Toriyama’s works.” — Maeda

Maeda-san, you’ve been involved in Toriyama anime since “Dr. Slump Arale-chan”, back before “Dragon Ball”. From this perspective, what do you think is the appeal of Toriyama-sensei’s drawings?
In design terms, it’d be that they’re drawings with no disagreeable aspects. For instance, there’s not really anyone who says they hate Toriyama-sensei’s drawings, is there? I think his designs have been accepted by so many people because there’s nothing disagreeable about them. The other distinctive feature about Toriyama-sensei’s pictures is that they’re realistic.
By “realistic”, you mean that his designs are simple, right?
Not his designs, but rather the way he treats his pictures is realistic. His way of applying a character’s muscles or build is very grounding; that is, his designs are grounding. I suppose you could say that this make his characters into humans of substance, with proper bones and muscle and the like. These really are incredibly difficult pictures; an animator who’s good at design can draw them, but it requires practice. They’re rendered with only a few lines, so it’s difficult to balance the eyes and nose, or the arms and legs; even if their position in relation to each other is just a little bit off, it ends up being a completely different person. Even I remember struggling a lot because I wasn’t able to properly balance kid Goku’s hairstyle at first, and his Super Saiyan hair was really hard too, since it was so spikey (laughs). Midway through the anime version, I was allowed to see sensei’s un-inked rough drafts, and use them as reference for how to apply the lines.
The original work [i.e. the manga] gradually changed from rounded lines to sharp lines, but in an anime where a large number of people are involved, how did you unify the style of drawings?
Since we’d make a movie in the spring and summer each year, I’d use that as an impetus to come up with ways to make the pictures closer to the original work. Even with the regular TV show, I’d make a file of just the “Dragon Ball” chapters from each week’s Weekly Shōnen Jump, and draw while looking at that. In theory this would allow us to constantly broadcast Toriyama’s very latest artistic touches. In this way, the anime version was constantly aligned with the original work, and in fact, even as the designs evolved and new items appeared, we made hardly any setup materials, because there was no need to. This shows just how complete the original work was.
Tell us about your very first introduction to Toriyama’s works.
The first time I drew sensei’s pictures as an animator was back when I worked as a key animation man on the pilot of “Dr. Slump”, the work preceding “Dragon Ball”. A “pilot” is a film made for test purposes before broadcast, and this would have been around 1979, I guess. These were the rounded-line designs of sensei’s that I like, so I remember being happy just drawing those key animation pictures. Of course, even afterwards I remember my coworkers knowing of “Dr. Slump” from Weekly Shōnen Jump, and saying how interesting it would be to make it into an anime. I guess you could say that sensei’s drawings were atypical among the works running in Weekly Shōnen Jump at the time, like designs from another world. 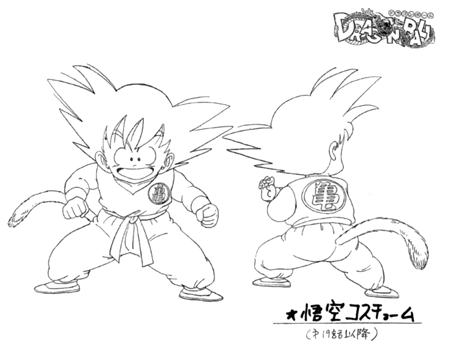 Goku’s Costume (episode 19 and onward)
And after that, you also worked as the character design director for the TV anime version of “Dr. Slump Arale-chan”.
At the time there were a lot of works where the designs for the manga and anime versions were very different. I liked Toriyama-sensei’s drawings, so I hated the idea of changed the drawings from the original work. That’s why I did my job with a feeling of “Since I’m doing ‘Dr. Slump’, I’ll take the manga panels and simply put them into motion as-is, without removing a single line! I’ll draw sensei’s pictures just the way they are!” Man, I was really young (laughs).
And that’s how you continued on as character design director into “Dragon Ball”.
Even when I was a character designer, I was happy just being able to draw pictures of Toriyama’s works (laughs). Before “Dragon Ball” began broadcasting, Toriyama-sensei’s editor took a character chart of Goku as a boy over to Nagoya, where sensei lives, and I was overjoyed when sensei OK’d it and sent it back with hardly any corrections.
Are there any characters you find especially difficult to draw?
Kame-Sen’nin was tough! I couldn’t get his round head right. So when I was visiting Toriyama-sensei’s house in Nagoya, I had sensei directly show me how to draw Kame-Sen’nin (laughs). He drew it on Kent paper, but the trick to drawing Kame-Sen’nin well was to slightly rotate your hand. So that made me understand it. My main impression of sensei is that he seems so simple and honest. He gives the impression of being an incredibly pure person, like Goku himself.
Is Goku your favorite character?
I’m especially fond of Goku as a boy. I also like Pu’er, who appeared around the same time, and other round characters like that. That’s why the scenes that left an impression on me are at the very beginning of “Dragon Ball”, around when Goku meets Bulma. Partially this is because it’s this period that sets up the entire work, but I also think this is the portion that feels most like a Toriyama work. I was very fortunate to be able to be involved with the “Dragon Ball” series. I’ve gotten good at drawing too. I actually seldom mention that I work on the “Dragon Ball” anime, but when I first meet someone and tell them my name, they’ll say how they’ve seen my name on TV. It’s things like that which make me glad to have had a hand in making something that’s remained popular for so long.
What do you think is the secret as to why the series has been supported by so many people for so long?
I think there’s a lot of factors, like how the pictures are easy to look at, and the story is easy to understand. But there are other works out there like that, so I don’t think it’s merely that. Even I don’t understand the secret to its popularity (laughs). 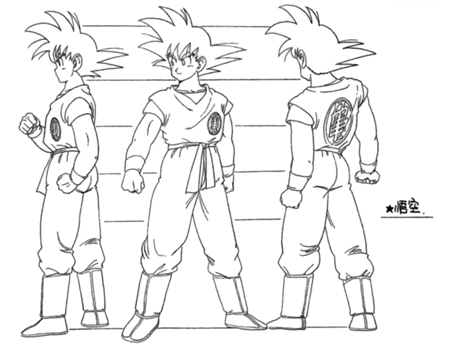 A Goku character chart made by Mr. Maeda (like the one above). Also called setup
material, its purpose is to unify the designs in the anime, where many different people
are involved. Mr. Maeda supervised the character designs from the time of Goku’s
boyhood up to the early half of his young adulthood.
You also designed original enemy characters for TV-original episodes and the movies.
In the case of original episodes, I’d do the designs while thinking of how sensei would draw it. I’d draw them as if I were taking parts from various different Toriyama characters and putting them all together. Well, I guess I can’t really express it concretely in words very well (laughs). I’ve been involved in Toriyama’s works for a long time, so for instance, even when drawing original characters for some other work, Toriyama’s influence will always come through somewhere (laughs). It’s not that viewers think there’s a resemblance, it’s just me who thinks so. For instance, when drawing a girl I’ll go “Hey, she kinda looks like Bulma” (laughs). Or when doing the wrinkles in clothes, Toriyama’s influence will come through.
Well then, I’d like to ask you for a few final words regarding “Dragon Ball”.
For me it’s been a very enjoyable, worthwhile time. Watching the re-broadcasts I’m reminded of the things that happened back then. And if there were to be a new “Dragon Ball” work, I have an incredibly strong desire to give it a shot again. But I’m also thinking of letting new young people make it instead, so that they can give me new inspiration by showing me a 21st century Son Goku. In that sense, “Dragon Ball” is an irreplaceable treasure inside me, but on the other hand it’s not as if it occupies one corner of my heart. How do I say this?… It’s a work that, rather than lingering on in some solid shape, has instead slightly colored my entire being.
English Translation: Herms
« Previous Page
Translations Archive