The Inside Story on Jaco the Galactic Patrolman 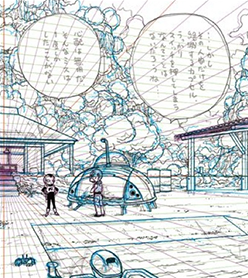 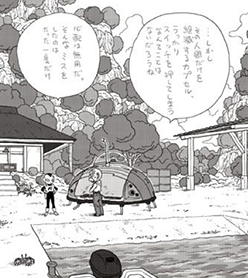 This is the panel on the first page of the second chapter.

For this comic, I’ve drawn everything by computer. Just because it’s a computer, however, doesn’t mean I can draw quickly. On the contrary, in my case, it actually takes even longer, and neither the sense of speed nor the “flavor” of the illustration can compete with a pen. However, since I wanted to express this comic in a bit of a picture-book style, and since there weren’t many action-scenes, I decided to draw it by computer, like I usually do for [standalone] illustrations.

The picture on the left is at the stage up to the inking being finished.

It might be a little hard to tell, but the light grey lines and text are a sketch called the storyboard. I have my editor look over this storyboard, and scrutinize the contents. It’s fine as long as you can understand the contents, so I’ve drawn it pretty roughly. Once I get the OK, I use this storyboard as a rough base, and then draw the draft. That’s what’s drawn in blue and pink. I’ve also drawn in lines to determine the perspective. The black lines are the finished inking; I make further adjustments to the image, so I don’t just trace the draft.

I have to draw it a total of three times: storyboard, draft, and inking, but this page is among the simplest. For things like the city scenes from chapter 4 onward, I tried not to make too much work out of them, but even so, it was hell.

This time, I conscientiously drew a storyboard and a draft, but up until now, in my case, it was a pain, so I’d immediately draw the draft and use it as a storyboard as well. That way, I could finish it in just two times, although it’d be extra work if I had to redraw it.

The picture on the right is the finished product, after applying tone I made myself to the inked image via computer.

Not having to take an eraser to it, since you only need to use the inked portions, is one of the merits of using a computer. Also, you can zoom the screen in and draw, which is a real lifesaver for these tired old eyes of mine.

If you look closely, I’ve changed the dialogue slightly, as well. Things like lettering are finished up by the editor, so I don’t mind leaving it handwritten.

By the way, there’s also a person who specializes in the title logo, so there’s no need for me to do it for myself, but in my case, I used to be a designer, so if I have the time, I draw it myself anyway.

What do you think? It’s pretty hard being a cartoonist, isn’t it?