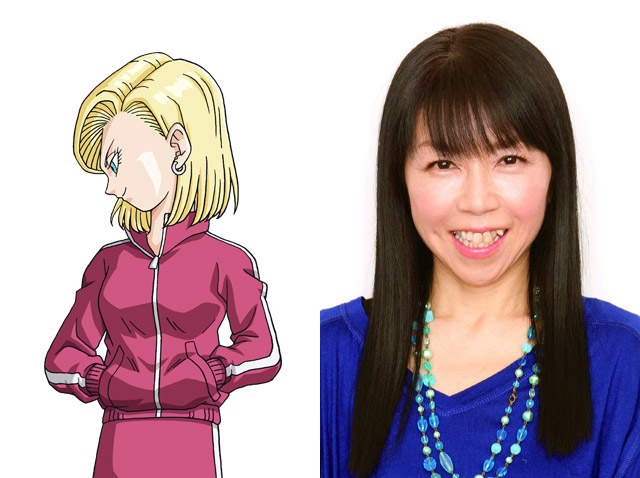 About Artificial Human No. 18
In the Universe Survival arc, 18 fights for the first time in ages! I was so happy! In Dragon Ball Super she has given birth to Marron and devoted herself to housework the entire time, but it’s good to see that she’s kept in shape (laughs).

What’s more, I’m glad that this time around she was able to fight alongside Kuririn. After all, she’s obviously much stronger than he is, and yet she never gets a chance to fight. Well, I suppose that’s what makes 18 so great: she supports her husband Kuririn and is a mother to Marron. But even so, fighting again after so long got my warrior blood pumping! I got a little choked up too when Kuririn would rush to my aid in the midst of battle, and cheer me on. He really loves 18! I get a kick out of Mayumi (Tanaka)-san calling my name in that earnest voice of hers! I love Kuririn too! There’s no better couple in all of Dragon Ball! When it comes to the power of love, they’re more than a match for the likes of Ribrianne, no matter how young and cute she is! And besides that, having 17 participate and being able to fight alongside him… I never dreamed that would happen, so it made me very happy.

A Message to the Fans
17 saves 18, 18 saves 17, during downtime the two of them can communicate with just a glance, their hearts beat in unison… it’s been a long time since I was able to reconfirm my bond with 17. I think this reunion has been splendid. 17 has survived to the final episode, so I’m cheering him on as hard as I can. I want you all to cheer him on too. It’s sure to be a wonderful climax!
English Translation: Herms
« Previous Page
Translations Archive