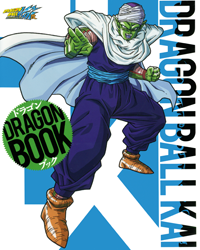 It’s Fast, At Any Rate
“Dragon Ball Kai” (“Kai” from here on out) certainly develops at an incredibly fast rate. It really surprised me!! For instance, Goku is already dead by episode 3! It made me wonder what kind of a beginning this was. But things are progressing rapidly in the world today, so perhaps this kind of tempo is a good thing. In “Dragon Ball Z”, just gathering ki would be dragged out over 3 weeks, while in “Kai”, I can fire right away! I think only “Kai” has that sort of compactness.
The Secret of Post-recording
Speaking of the advantages of “Kai”, when doing post-recording I can see the images for every scene. This allows me to more naturally perform the mid-battle banter, which is the best part of the “Dragon Ball” series, and makes it easy for me to put some real force into it. And my chemistry with everyone during post-recording is great! There’s been no letup in performing Goku for the games and other jobs like that, so from the first post-recording session, while I didn’t get a feeling of “it’s been so long”, I didn’t feel out of place either. While in “Kai” right now I’m performing Goku, Gohan, as well as Goku’s father Bardock in episode 11, I’m not really conscious of switching between roles. For example, even when performing a scene where Goku is fighting and Gohan is crying, there are two switches in my head for “Goku” and “Gohan”, and I picture myself naturally switching between them. In particular, I never have to get myself ready if Gohan’s crying scene is next. In this way I can make the flow of my lines even smoother. So in this sense, the pictures being already done in time for post-recording makes acting easier. 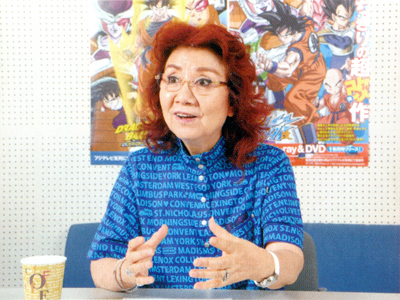 Empathizing with Goku and Gohan
Me, I really love Goku. No matter what kind of pinch he’s in, he never gives up, and protects everyone with all of his strength! I’ve been privileged to perform many heroes like that, but Goku stands out! I think people who use their power for others are really something. Gohan’s like that too. He’s a good little kid, without any snottiness to him, so he’s almost like a representative of all children. I mean, he was able to change Piccolo’s personality, when Piccolo was such an evil guy! He was still only five during the battle with Vegeta. Though he was a real crybaby at first, he turned out just fine (laughs). I think part of the appeal of “Kai” is how Gohan, unaware of the power he has, grows strong through his training with Piccolo and the battles on Planet Namek. As we recorded things this time around, I thought again about how unforgivable Vegeta is (laughs). I can empathize with Goku and Gohan no matter what, but Vegeta is always hard. Ryō Horikawa-kun, who plays him, says that it feels good, but that sort of cruelty really gets to me (laughs). I just thought “Damn!” to myself whenever doing post-recording for times like when Vegeta attacks Goku even though Goku is all beat up. I think everyone watching the TV broadcasts already knows about this, but when it looks like Kuririn is going to finish off Vegeta2, Goku stops him. The week after we recorded that, Mayumi Tanaka-chan (who plays Kuririn), and Hiromi Tsuru-chan (who plays Bulma), both said to me, “Mako-san! Why did you let Vegeta get away?!” I told them that it wasn’t me, it was Goku who did it!! Somehow it seemed to them as if I was the one who stopped Kuririn (laughs). But even though Vegeta is a real nasty guy, of course we seiyuu all get along just fine (laughs). I’m always a little hungry after recording3, so I go out to eat with everyone. We even talk about the “Kai” episode: “What, today’s episode was made from 10 episodes of Z?!” (laughs). The producers will even join us too, and we’ll enjoy the meal together.
Kuririn and Bulma, My Best Friends
Of course, since I’ve been doing this for so long, I’ve grown attached to other characters besides just Goku and Gohan. It’s hard to choose one over the other, but Bulma and Kuririn are certainly two special cases. Bulma was Goku’s very first partner, and was the first to help him out when he was in trouble. That’s really cute. And even after the battle with Vegeta, Bulma was the first to go over to Goku. Chi-Chi is his wife, but even she went over to Gohan, and I thought “What the hey?!” (laughs). And then Goku really loves Kuririn, which is quite nice. Oh, and I also like when Gohan and Kuririn team up! It’s great how, despite the difference in their ages, they still both trust each other as comrades! In particular, the two of them are really active during the Planet Namek arc, so I hope you look forward to that! 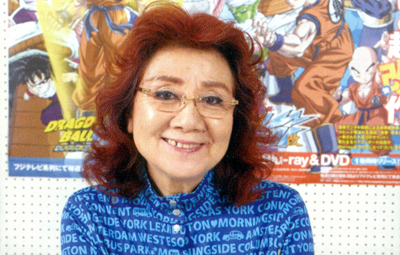 I Want All of Japan to Watch
For those who have bought this box set, I think that instead of just having one, you should have two — one for regular viewing, and another for permanent preservation (laughs). And when watching it, always invite three friends over. Then those three can recommend the show to three more people, and it will increase even further (laughs). I’d be really happy if people from all over Japan watched “Kai”! In Dragon Ball, above all else, the characters have a great way of living! The way that they rescue the weak really tugs out the heartstrings. So I’d love for everyone to enjoy the show: parent, child, and grandparent. If you raise your kids watching “Kai”, they’ll definitely become good little kids like Gohan! I want people throughout all of Japan to be going “Dokkan-Dokkan”!!
1Goku’s father appears at the beginning of episode 1. He quickly realizes Freeza’s true motives, but is destroyed by Freeza’s overwhelming power, together with Planet Vegeta.
2The climax of the battle with Vegeta, which takes place from episodes 16 to 17. It’s included in Box 2 of the Blu-ray boxes!
3Because the post-recording sessions for “Kai” begin at 4:00 PM, after recording ends the performers are all very hungry.
English Translation: Herms
« Previous Page
Translations Archive