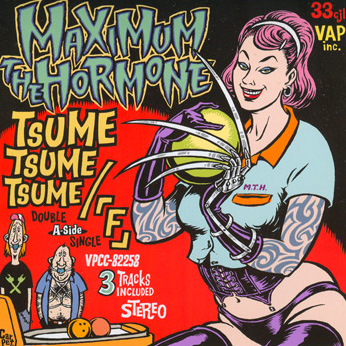 Song Commentary from Maximum the Ryō-kun

Right from the get-go, it’s the repetition of a seriously dangerous phrase. It’s a terrible thing. (laughs)
Especially when the one saying this phrase is a long-haired fat guy, which ups the danger even more. (laughs)
Now then, as for just what the “F” in the title “F” stands for,
I bet there are a lot of people who realized it from looking at the lyrics.
However, it’s not that this is simply a song about “that manga”.
It’s an “F” with a much, much deeper meaning.
There is great significance in the fact that I narrowed the target to that comic’s “Planet Namek arc”.
In the comic, numerous conflicts arose over the “wish-granting orbs” on that planet,
and many of its innocent inhabitants, who had been living peacefully, were killed.

A people subjugated, oppressed, and massacred solely for the whims of the powerful and strong.

Hmm? Doesn’t this seem like something that’s happening in a country somewhere?

That’s why I thought I’d choose this comic and make it into a song.
It turned out practically awesome enough to make the earth to tremble and shake, and for a scouter to break at any moment.
But it’s not just a song about a cartoon. It’s also a “song of that people” in the real world. You get it now, right?
The little shits who don’t get it had better start paying proper attention to world events.
Those in power, who erase people’s lives like worms, solely for the sake of their own whims.
Are those who get in the way immediately to be Phowa?
(See? It’s linked up to the repetition of that dangerous phrase from the beginning of the song.)

Finally, now that everything’s come together,
I want you to listen once more to the chorus.
That chorus, which sounded like repeatedly calling [the name of] that villain character starting with “F”—

So now you know the true meaning of “F”.