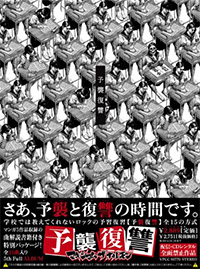 Ryō: The “F” actually stands for “Freedom”, you know: “Freedom! Freedom! Freedom!” The thing is, if we just shouted “Free Tibet!” as-is, it wouldn’t exactly work as Hormone’s rock music. So, “Freeza”. We used Freeza’s oppression of the Namekians in Dragon Ball‘s Planet Namek arc as an allegory, tracing the issue of real-life genocide.

Shira: It’s nice how you don’t put Hormone’s political opinions out there directly.

Ryō: In terms of this album, “A-L-I-E-N” is like that, too. With themes like this, there’s also the opinion that it doesn’t mean anything if you don’t sing about it in a straightforward way, but there’s a freedom of expression in music, so I say, I’ll fix it up however I want. Then again, I think it probably also means something for people who listen to Hormone to think for themselves, “I wonder what it means?” or “What’s the message?”

Ryō: But more and more people don’t try to find out for themselves. Just the other day, I tweeted “The ‘Ro’s in ‘Astro Robo SASA’ feel good,” and almost everybody reacted like, “‘Astro Robo Sasa’?? I don’t get it.” Oh, by the way, Astro Robo SASA is a Famicom game from back when I was in elementary school.

Shira: I didn’t know that!

Aka: That game has terrible controls. (laughs)

Ryō: Ohhh! Just as you’d expect of a retro gaming nerd. (laughs) The generation that doesn’t know about Astro Robo SASA should look it up if it bugs them. But they don’t; they say “What’s that? I don’t get it”, and that’s it.

Ryō: And the repetition of “Phowa” at the beginning of his song, even — the generation that doesn’t know the word “Phowa” is surprisingly large.4 That means, they also don’t understand the meaning of my levitating in the band photo at the time.5

Sen: A joke on the “Venerated Teacher”, right?6

Ryō: Only, that’s because I’d been made fun of on the Internet since way back because I’m supposed to look like him on the basis of my “long hair”, “being fat”, and “having a beard”. It was also a kind of self-deprecating humor in reference to that, too.

Aka: That MAD of “F” and Dragon Ball on YouTube is pretty sick.7

Ryō: That’s awesome! I could cry. I’d even wanna make that the official music video for “F”, and include it as a bonus on this album.

Ryō: And also, you know how, a while back, Akira Toriyama-sensei went with his daughter to see a Hormone concert in Nagoya? Shouting “Freeza! Freeza” in front of Sensei at that time was pretty friggin’ sweet. He even drew us a picture of Freeza with his autograph, which was really something else.

Ryō: We’ve performed the song in front of Sensei and gotten a Freeza autograph from him, so why don’t we go ahead have them make this song the main theme the next time Dragon Ball‘s made into a movie?!

The following translator notes are included for the benefit of the reader as supplemental information.
1 An indie record label under the umbrella of NTV’s recording-industry arm.
2 NTV’s arm dealing with home-releases of audiovisual content.
3 The cohort of Japanese youth who experienced the Ministry of Education’s “Relaxed Education” policy, primarily those who were in junior high school and high school between 2002 and 2013, when the curriculum was reduced by about 30% and classes reduced from six days a week to five. In recent years, due to declining standardized test scores, the curriculum has been weighted down with more material again, though school on Saturdays is still no longer a thing.
4 Phowa is a Buddhist concept of the direct transfer of one’s consciousness to one of the Pure Lands at the moment of death of the physical body. However, it was distorted by the Aum Shinrikyō cult (which carried out the sarin gas attack on the Tokyo subway system in 1995) into a byword for killing others in their way, ostensibly in order to help them achieve enlightenment/salvation. In the song, it is used cynically as a euphemism for killing the Namekians (or other oppressed minority), supposedly for their own good.
5 Of the 2008 singe, Tsume Tsume Tsume / “F”.
6 Shōkō Asahara, the former leader of the Aum Shinrikyō cult that carried out the 1995 Sarin gas attacks on the Tokyo Subway, as well as other religiously-motivated terrorist acts. He is currently on death row. Part of his religious teachings involved yoga and other “ascetic” practices, which is the reference here.
7 This video, also shared on other popular services such as NicoNico, in 2008 following the song’s original release
8 The character Dio Brando from JoJo’s Bizarre Adventure by Hirohiko Araki; he is the central villain over the course of the first six parts of the series, and well-known on the Internet for his hammy, meme-tastic catchphrases. (e.g., “You expected [a cat video / an informative article / etc.], but actually it was I, DIO!”)
English Translation: SaiyaJedi
« Previous Page
Translations Archive