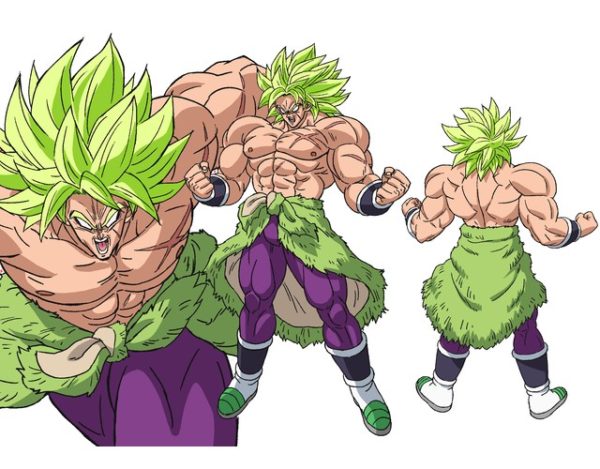 Naohiro Shintani
He has worked on numerous Toei Animation TV animation projects such as One Piece and Pretty Cure All Stars New Stage 3. He is the animation supervisor and character designer on the movie Dragon Ball Super: Broly.

Please tell us about how you first encountered Dragon Ball.
I watched the anime from the time I was in elementary school. I believe the anime was what got me interested in it first, rather than the manga. Plenty of other people I knew liked Dragon Ball, too. I went to the theater with my big brother each year to watch the movies.1
How did you get the opportunity to become animation supervisor for the upcoming movie?
There was an audition where several of us drew character designs, then Toriyama looked them all over and picked me. I drew the characters that Toriyama viewed as most important: Goku, Vegeta, and Bulma. I’ve never drawn for Dragon Ball the entire time I’ve been with Toei Animation. This was my first time, so it felt very fresh to me.2
What did you pay particular attention to when drawing the characters in your own way?
Toriyama’s style has changed from how it used to be, so it was difficult to judge what sort of style I should emulate. I believe he now only draws using his current style, so I felt I should draw with that same updated look.
As you worked on the character designs, were there any instances when Toriyama made corrections?
There were times when I received corrections he’d made on clean copies of the designs. It seemed Goku’s look was fine, so I didn’t get any corrections on him. He mainly redrew the female characters. He’d often correct things like the body lines or faces. Since Dragon Ball doesn’t have many female characters I was under the impression Toriyama wasn’t very particular about them, so this came as a surprise.
Can you tell us specifics about the character design process?
Around October 2017 I submitted the rough designs, and once they were okayed I proceeded with making clean copies of them. There were quite a few sheets. I also drew various expressions for each character, so the number of sheets piled up rapidly. For Goku alone, there’s his normal version and Super Saiyan, plus his Red and Blue forms.

I used Toriyama’s designs as a basis and I redrew everything to be suitable for animation, but the whole time I was wondering, “is this good enough?” Since I wasn’t accustomed to drawing Dragon Ball yet, I also referenced the flow and expressions of Yamamuro’s designs.3 I also re-watched all of the old movies. Some people prefer the Cell arc, while others think the Freeza arc is the best, so it was hard to judge which era’s style I should use for the designs. I like the designs by former Dragon Ball television series animation supervisor Minoru Maeda, so while I was drawing I hoped to bring out the same nuance as his work, with a softer touch to the forms and expressions.

How were the visuals for the teaser poster decided?
I drew the poster around February 2017. Between the layouts planned by the publicity team and the five or six rough copies I drew, there were about fifteen total to choose from. It’s kind of embarrassing to admit, but the one with Goku holding the Nyoibō was my wife’s idea. She likes Dragon Ball too, and she said, “why not have him hold the Nyoibō?” There’s a title page illustration of Gohan as a kid holding it4, so I think that’s what she had in mind when she suggested it. Certainly the image of an adult Goku standing with Nyoibō in hand packs quite a punch, while also invoking a nice sense of going back to the beginning. When I drew the actual version, everyone was so happy (laughs). There are already so many compositions featuring Goku firing a Kamehameha or in a regular standing pose, it just feels done to death.
Being the animation supervisor means that you check all of the animators’ work, correct?
That’s right. Since the movie came in quick succession following the Dragon Ball Super anime, I’m able to rely on many of the talented staffers who were in charge of animation on the television series. I have Chief Animation Supervisors like Miyako Tsuji and Takeo Ide, and animator Yūya Takahashi is also acting as a part-time supervisor, so it’s an embarrassment of riches. The episodes of Dragon Ball Super that featured Takahashi’s work got a big reaction from fans, so I want to utilize his work as much as possible to meet fan expectations. Director Nagamine is granting us a lot of freedom and entrusting everything to the artists, so it’s very enjoyable for us. I hope everyone’s individuality will shine through.
Please tell us your thoughts from reading Toriyama’s plot.
Part of me is like “Wow, Broli’s in this… that sure takes me back!”, but at the same time there’s a lot of pressure since those old Broli movies were so influential. This movie features a refreshed version of Broli written by Toriyama, so the first priority is establishing that image with new fans. Broli’s character concept is different than before, so for those who already have a strong sense of what he’s like, we hope they can keep their nostalgia for the old version while still growing to love this new Broli too. They may feel like something is a bit off at first, but director Nagamine is striving to make an enjoyable movie, so I’m sure it’ll turn out great.
Was there anything you were conscientious of when drawing Broli?
I haven’t worked on many anime that feature buff, muscly men before, so that part was tough. Even Toriyama has made the characters less muscular than they appeared in the past, so I made a conscious effort to evoke a slim muscular style like he does.
What aspects of the action scenes were you most particular about?
The everyday life scenes don’t have very much shading, but when the movie ramps up into battle mode the shading increases and the muscles pop out more clearly, providing greater contrast that makes for a cool impression. Using the same shading throughout would weaken the impact of the parts we want to show off most, so we wanted the visuals themselves to clearly say “it’s time for battle!” No one would be satisfied watching Dragon Ball without cool action scenes, so we have animators who are particularly skilled at action sequences working on those parts. I’m always thinking “that’s so cool” when I check their work (laughs). There are a lot of everyday life scenes as well, so I draw those carefully to make sure the characterizations come through, but for the action scenes I tell them, “do it however you like.” I also ensure that Toriyama’s gags are properly portrayed. I sure hope everyone gets some laughs (laughs).
Lastly, please tell us about the enthusiasm level for Dragon Ball Super: Broly.
Nagamine is aiming to have it take in 10 billion yen at the box office, so I’m doing everything possible to help it get there! It’s best to set high goals, after all (laughs).
The following translator notes are included for the benefit of the reader as supplemental information.
1 The films contemporaneous with the Dragon Ball series’ original serialization were screened as part of double/triple-features with other Jump property films at Toei Animation fairs typically held during school breaks.
2 Shintani is actually credited as providing some key animation on Dragon Ball’s 2008 Jump Super Anime Tour Special.
3 Tadayoshi Yamamuro, character designer and animation supervisor on later parts of the Dragon Ball Z television series and theatrical films; also the animation supervisor for the Dragon Ball Super television series.
4 Chapter 207 of the Dragon Ball manga.
English Translation: sailorspazz
« Previous Page
Translations Archive