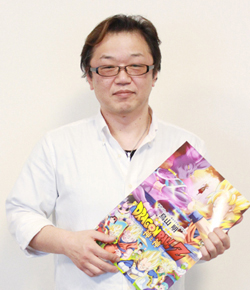 For OKStars Vol.249, we bring you an interview with Tadayoshi Yamamuro-san, who handled animation supervisor duties for the theatrical film Dragon Ball Z: Battle of Gods!

Please tell us the catalyst for your becoming involved in this work.
I’ve always handled key frames for Dragon Ball-related works, so when I was called upon in March of last year, I felt, “so it’s [finally] come”. (laughs) Even after the TV anime ended (* Dragon Ball GT ended its broadcast in 1997), I occasionally had the opportunity to handle key framing1, but when it came time for the movie’s key frames, it was the first time in 10-odd years. At any rate, it’s a work with big expectations, so it was almost too worth doing. I was fine with saying I’d do it, but there really is a lot of pressure. (laughs)
In what way did you proceed with the work?
Previously, first I would draw the roughs of the characters, then have the creator, Akira Toriyama-sensei, consider them, but this time, art for the characters came up from Toriyama-sensei first, so I was surprised. It’s rare for Toriyama-sensei both to be involved from the scenario stage, and to have drawn the costumes for all the characters. I felt that Toriyama-sensei’s enthusiasm for this theatrical release was considerable. So normally when making them into animation, we would simplify the illustrations for the key frames in order to make them easier to move, but since Toriyama-sensei had drawn this much, I wanted to animate them as-is, without any simplifications.
Please tell us about the guest characters Beerus and Whis, and Super Saiyan God.
Beerus and Whis are characters who already existed at the scenario stage. Beerus originally had a lizard-like form, but at Toriyama-sensei’s idea, he ultimately became an Egyptian-style cat character. I handled the roughs for Super Saiyan God. It was “a being that surpasses everything” so I drew a character more built than Super Saiyan, with a cape, but then illustrations with a completely different feel came back from Toriyama-sensei…. It was too different from my own internal image, so I tried suggesting the more sturdily-drawn character one more time, and then Sensei told me that it really was all wrong. (laughs) It had always gone through with a single check [before], but this time, we had that sort of exchange many times. Please check how Super Saiyan God is drawn at the movie theater.
What areas did you pay attention to as the animation supervisor?
Dragon Ball is a long-running series, so I paid attention to what period of Toriyama-sensei’s art I should match it with. Ultimately, I struck a balance between the feel of the art at the end of the “Majin Boo arc”, and the slightly [more] realistic art that Toriyama-sensei draws now. The latter half of the “Majin Boo arc” comes to have gags mixed in. I felt that this movie was probably aiming for that sort of atmosphere as well, so I took the facial expressions from the volumes around that point.
What do you think is distinctive about Toriyama-sensei’s illustrations?
The characters’ faces are of course distinctive, but the most distinctive thing is the way he draws muscles. The characters Toriyama-sensei draws all have beautiful muscles on their bodies. The ears also have the proper shape for people’s ears. He moves the muscles in the same way as the body, so I think [that’s why] the battle scenes appear more real.
Goku gets excited when a strong enemy shows up; was there anything that you yourself got excited about in this work, Yamamuro-san?
I’m most excited when I’m drawing the battle scenes. In live-action, the actors would be performing, but in animation, the animators are the ones doing the performance, so no matter what the scene, if you don’t empathize with the characters and raise your spirits, you won’t be able to draw a good performance in keeping with the role. The character I particularly empathize with and get excited about is definitely Goku.
What were the places you were especially particular about in the battle scenes?
I thought, if they fire an energy blast at the party, it would destroy the site and nearby buildings, so [I need] a way for them to be able to fight just with their limbs… so I tried putting in some locking techniques, which is rare for Dragon Ball. At first in the scenario, it was written that “Beerus deals with Piccolo, Tenshinhan, and No. 18 with a spoon or fork”, but it would be difficult to fight that way, so I asked the director Masahiro Hosoda, “would chopsticks be all right?” and got the OK, so I put in some action where [Beerus] grabs and throws them like Jackie Chan. I was able to handle the storyboards for this part, as well, so I was able to draw it comparatively freely, and was satisfied with it.
When you gather the seven Dragon Balls, Shenlong will grant one wish. If he were to appear, what would you wish for?
I’d like a small cottage-style house, so I’d want him to give me that. (laughs)
Please give a message to the fans who are looking forward to this work.
This theatrical release is a fun work with both gag-scenes and battles. Its contents can be enjoyed by small children all the way to adults, so please come see it with your kids.
The following translator notes are included for the benefit of the reader as supplemental information.
1 Tadayoshi Yamamuro was the animation supervisor and character designer for “Heya! Son Goku and Friends Return!!” (2008), “Dragon Ball: Plan to Eradicate the Super Saiyans” (2010), and “Dragon Ball: Episode of Bardock” (2011). Even though he also is credited as a key animator in all three features, it is sometimes out of courtesy that the animation supervisor is credited as a key animator, whether or not they actually provided any key frames, which Yamamuro clarifies in this interview.
English Translation: SaiyaJedi
« Previous Page
Translations Archive