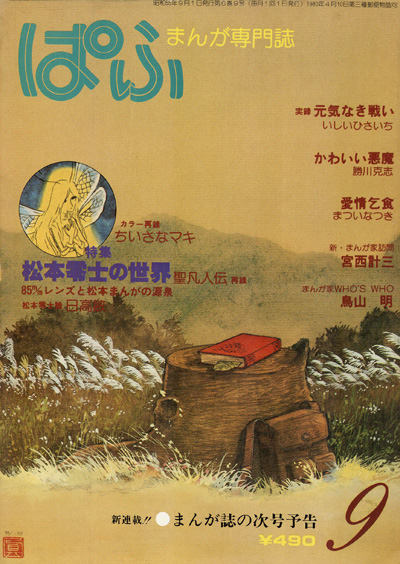 WHO’S WHO IN COMICS 14
Exploding in popularity with his first serial, Dr. Slump
The young hope who has become the center of attention in the blink of an eye
AKIRA TORIYAMA

Please give us a short personal profile
It’s my real name. Born on 05 April 1955 (age 25). After graduating from high school, I worked at an advertising agency as a designer. After I left, I spent a year doing nothing in particular. At age 23, I drew my first comic. …Then submitted → was naturally rejected, submitted → rejected, at which point I was taken under the wing of my current editor, which brings us up to now. ::I send in my manuscripts by air mail from the remote countryside of Aichi.::
1. Your motivation for starting to draw comics
The illustrations that I occasionally drew as a part-time job were just too much of things I didn’t want to draw, so kind of as a reaction to that.
2. People/works that influenced you in your drawing comics
Consciously, anyway, I don’t think I’ve been influenced by anyone in particular, but it seems that I really have been influenced by lots of people. Going aaaaaaaall the way back to the beginning, I think it was probably Osamu Tezuka-san’s Astro Boy.
3. What did you want to be when you were a child?
I’m a dunce, so I’ve forgotten.
4. If you hadn’t become a cartoonist, what would you have been?
A third-rate illustrator roaming around the countryside.
5. Please give us your height, weight, and eyesight.
173 cm [5′8″]. 60 kg [132 lbs.]. 0.2 [20⁄100] in both eyes.
6. Your favorite colors
Shades of blue, I guess.
7. Favorite sports
Baseball, table tennis, etc. … although I don’t play them now.
8. Do you watch movies often? What kinds of movies do you like?
I watched them quite a bit way back, but now, I’ve stopped bothering unless it’s something everyone’s talking about (the movie theater’s far away!).
9. What kinds of books do you read?
Apart from magazines, you mean? In that case, hardly anything, really….
10. Your favorite music (artist, song)
While it does kind of feel like I’m late to the party, I seem to like Yellow Magic Orchestra. No song in particular. Come to think of it, George Tokoro is good, too.
11. Out of all animals, what do you like the best?
Triceratops! (The design is good)
12. Out of all insects, what do you like the best?
Migratory locusts! (Because the face looks so much like Kamen Rider that I inadvertently want to laugh)
13. Out of all plants, what do you like the best?
The palm trees that fill out the backgrounds of my comic.
14. If you could be reincarnated as a non-human life-form, what would it be?
A fox (because it could take human form).
15. Who is your rival?!
Dr. Senbei (I also like Yamabuki-sensei). Oh, you mean a cartoonist?
16. Things that Clint Eastwood and Akira Toriyama have in common (if any)
We’re both men! (To one extent or another…)
17. What you want to do, apart from work or sleep
I just wanna sit there without thinking about anything, laughing like a fool and lazing around!
18. Which do you like better: Japanese cooking or Western cooking?
I’m an economic human without any likes or dislikes!
19. What you want to eat most right now
Arare crackers wrapped in seaweed.1 Just kidding….
20. Which are you better at: frog-fishing or dragonfly-catching?
Frog-fishing! I don’t like things that fly!
21. Who do you think is stronger: Godzilla or Gamera?
Hmm~. Gamera can fly…. Come to mention it, it’s not like Godzilla can’t fly, but the way he flies is kind of dumb….
Godzilla — Height: 50 m / Weight: 20,000 [metric] tons
Gamera — Height: 60 m / Weight: 80 [metric] tons
…So I guess it would have to be Godzilla, then.
22. Do you like girls who wear glasses?
I like them!! I love girls, whether they wear glasses or not!!
23. We understand you might like model-building, so please tell us the one you like best out of what you’ve built thus far
The German 20mm anti-aircraft gun from Tamiya that I spent two months altering here and there as I built it. Once you start building them, there’s no end, so I’m trying not to build them now.
24. If there are any words you live by, please tell us what they are.
Hmm~ Seeing as how nothing comes up when I think about it, I guess there probably aren’t any.
25. In your life, the one thing you absolutely want to do and the one thing you think you absolutely mustn’t do
What I absolutely want to do………Absolutely that thing!
What I absolutely mustn’t do………I absolutely must not do that one thing!
26. In your life, the one place you absolutely want to go, and the one place you think you absolutely mustn’t go
Where I absolutely want to go………Absolutely that place!
Where I absolutely mustn’t go………I absolutely must not go to that place!
(My editor tried to get me to answer with “Turkey” for both)2
27. Name some souvenirs from your hometown
If ya’s mean Nagoya, den it’s gotta be da uirō an’ da kishimen, yo.3
28. Lastly, a few words for Pafu’s readers, if you please
N’cha! Be gentle with me, now! 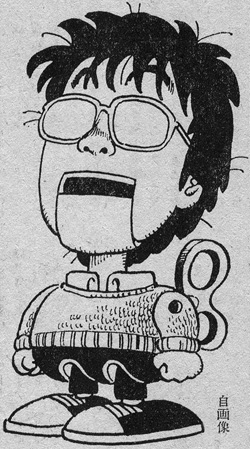 The following translator notes are included for the benefit of the reader as supplemental information.
1 “Norimaki Arare”, the exact name and play on the character Arale Norimaki in Dr. Slump.

2 Toruko in Japanese; this means both “Turkey” as in the country, and “Turkish baths”, a euphemism for a particular kind of establishment providing sexual services, renamed “soapland” in the 1980s after complaints from Turkish people.

3 While it would not be developed for another decade after this interview, the second Dragon Ball Z film showcased villains with name puns based on food from Toriyama’s home of Nagoya. For these two foods in particular: Dr. Uiro takes his name from uirō (a steamed rice cake), while Kishime takes his name from kishimen (a noodle made of flat strips).