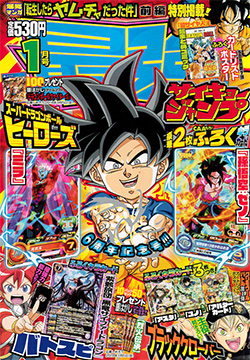 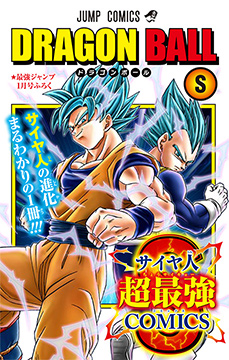 Unveiling for the first time surprising secrets of the Saiyans known only to Akira Toriyama-sensei!!
What foods do Saiyans like?
As you can probably tell by looking at Goku and co., Saiyans basically eat any food that seems edible; likes and dislikes aren’t a factor. I think they have fairly sturdy digestive systems in order to survive. The children still aren’t quite so sturdy, but they soon get used to it.
What do Saiyans have trouble with?
Probably studying; it’s not just the kids who struggle with it.
Do all Saiyans become combatants?
A baby’s battle power is measured as soon as they are born. If their numbers pass a certain standard, then they are considered upper-level warriors and immediately raised as combatant candidates. On the other hand, those whose numbers remain low even after a certain amount of time has passed are regarded as lower-level warriors, and become either engineers or are sent off to a planet somewhere as “infiltration babies”1. If they grow strong enough to conquer that planet, then they can return to their home world as a combatant. However, infiltration babies do not have a high survival rate. Raditz was an upper-level warrior and assigned to the same group as Nappa as a proper combatant. Before long Vegeta was added to that group, too.
Do Saiyans train to fight?
Most Saiyans are born with a talent for battle, but they still need to be taught the trick behind flying and stuff like that. Of course, some kids manage to fly even without being taught. In Goku’s case, he was on Earth where people flying was simply unheard of, so he was pretty slow to learn it. Only a select few Saiyan children receive a short period of special training in order to acquire even greater battle power.
Can anyone become a Super Saiyan if they train?
It’s not like anyone can become a Super Saiyan through training and anger. In order to become a Super Saiyan, one’s body must contain something called “S-Cells”.2 Once these S-Cells reach a certain amount, a trigger such as anger will explosively increase the S-Cells and cause a change in the body; that’s Super Saiyan. Most Saiyans have some S-Cells, although not a great quantity. The reason why Goku and Vegeta’s children can become Super Saiyan relatively easily is probably because to a certain extent they inherited a lot of S-Cells, and also because Earth’s environment is gentler and easier to live in than Planet Vegeta.

[Tori-bot] “Lately everyone becomes Super Saiyan so easily, but it is no simple matter.”

↓ And how does one increase S-Cells to become Super Saiyan?

Having a gentle spirit is the best way to greatly increase one’s S-Cells, but most Saiyans have trouble with this, which I think is why no Super Saiyans appeared for such a long time that they became the stuff of legend. However, one can’t reach the quantity necessary for becoming a Super Saiyan simply by having a gentle spirit, so a certain amount of battle power is indeed necessary. Looked at in this light, it’s easy to see why becoming a Super Saiyan came easy for Goku.

[Goten picture] “He was able to easily become Super Saiyan thanks to inheriting lots of S-Cells!”

Do the Saiyans have amazingly advanced science?
While their science isn’t all that advanced, I think they are ahead of Earth when it comes to spaceships and combat stuff, since they’ve been attacking other planets since way back when. But afterwards they joined the army of Freeza’s father Cold, which had vastly more advanced science than they did. Cold’s army provided them with virtually all of their weapons, armor, machines, etc.

Are the Saibaimen a Saiyan invention?
The Saibaimen are one of the Saiyans’ classic weapons. But the Saiyans didn’t invent them; rather, they are a lifeform discovered on a certain planet.3 Saibaimen are handy since they can fight on their own, but they are also an extremely rare and valuable item since harvesting their bulbs is difficult, so not everyone gets to use them. Plus they’re so wild they might attack you, so only a select few warriors are capable of handling them.
Do the Saiyans celebrate holidays like Christmas or New Year’s?
Saiyans are individualists at heart, so sadly they don’t hold those kinds of celebrations. Besides, lots of Saiyan warriors are off on other worlds and can’t come back home constantly, so I don’t think it could be like that.

[Tori-bot] “Saiyan children don’t play. Well, I guess fighting is like playing for them… they’re a terrifying race.”

Was the “legendary Super Saiyan” Freeza feared the Super Saiyan God that appeared in Battle of Gods?
In a certain sense, they are the same person. That is to say, very long ago, before Planet Vegeta was the Saiyans’ planet, there was a man named Yamoshi4 who had a righteous heart despite being a Saiyan. He and his five comrades started a rebellion, but he was cornered by combatants and became a Super Saiyan for the first time, though his transformation and fearsome fighting style shocked the other Saiyans. Outnumbered, Yamoshi eventually wore himself out and was defeated, but this was only the beginning of his legend. Afterwards, Yamoshi’s spirit wandered in continuous search of six righteous-hearted Saiyans, seeking a new savior: Super Saiyan God.

[Tori-bot] “And that’s why there’s that ceremony to become Super Saiyan God.”

↓ And why did Beerus search for Super Saiyan God?

Beerus probably picked up on information about Yamoshi’s spirit in his prophetic dream. The fact that this is recorded in the Namekian book of legends5 is likewise because the Namekian elder who wrote it sympathized with Yamoshi’s spirit.
How can I become strong like the Saiyans?
While I think you’re better off not becoming like the Saiyans, your first step should be to become able to eat anything, then go train with the Turtle Hermit. If that doesn’t work, I guess you can try gathering the Dragon Balls and making a wish.

[Captions] To become strong like a Saiyan… Eat anything! Train! And if that doesn’t work… that just leaves Shenlong!!

1 飛ばし子 (tobashi-ko) — a child that is cast away. The term was used in the “Dragon Ball Minus” bonus chapter of the Jaco the Galactic Patrolman collected edition. Viz adapted this as “infiltration child” in their official English translation.
2 Written here in the original Japanese text as S細胞 (S-saibō).
3 This contradicts information given in the seventh Daizenshuu, which states a memo from Akira Toriyama to the anime staff containing background information on the Saibaimen noted that that they were created by a Saiyan scientist using biotechnology.
4 Yamoshi (ヤモシ) is likely a pun on moyashi, Japanese for bean sprouts.
5 A Namekian “book of legends” has thus far only been mentioned once prior to this interview: in the ninth episode of the Dragon Ball Super television series, during a scene where Shenlong explains how said book told of the ritual for bringing about Super Saiyan God.
English Translation: Herms
« Previous Page
Translations Archive