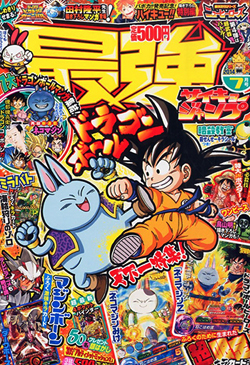 Naho Ooishi goes to the source!!

Akira Toriyama-sensei talks about the secrets of the scouter!!

Why does a scouter break when it picks up a high battle power?
To be honest, it’s just showy staging for a comic. It’s really digital, which makes it impossible, but in terms of something analog, it’s like how a counter that’s rising at breakneck speed can’t keep up and breaks down.
It seems that there are old- and new-type scouters, but are there various other types of scouters as well?
They’re the same in terms of features, but a variety of different aliens wear them, but there are a bunch of different types of attachment parts depending on the position of the ear. If you’re a soldier in Freeza’s army, you can have one made to order to fit your ear. The different screen colors can be chosen to fit the peculiarities of different aliens’ eyes, or to suit one’s tastes. Also, dual-eye types exist as well. Incidentally, its inventors were the Tsufruians, the original inhabitants of Planet Vegeta who were wiped out by the Saiyans. Originally, it was a device for the purpose of guarding against enemies and beasts, but Gichamu1, a highly skilled engineer in Freeza’s army, laid eyes on it and made modifications for concrete battle power numbers and telecommunications abilities, and soldiers began making use of it to carry out offensives.
Do scouters have any hidden features, or features that you would have given them if you were to do it now?
If the form or location of the enemy picked up by the scouter were displayed in video, it would be even more perfect, but if you add features up to that point, it would get more difficult to do as manga story developments go. I’m not sure I should be saying this as the creator, but I wonder how scouters are attached around the ear. I was always doubtful of it when I was drawing it. It would have to be strong enough to withstand sharp movements. I suppose there’s be no other way but to stick it on tight with something. Well, that’s because it’s “alien technology”. On Earth, the headset method, like the toy, is the right answer.

Akira Toriyama-sensei, thank you very much!!