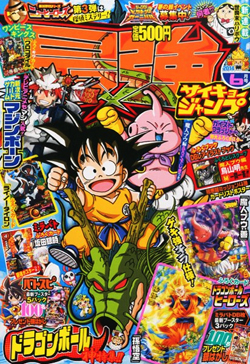 A project in commemoration of the anime Dragon Ball Kai‘s great popularity!

With a variety of quetsions such as, “Who was Satan’s martial-arts master?” and “What were the ingredients for Majin Boo?” Naho Ooishi-sensei goes straight to Akira Toriyama-sensei for the answers!!

There are innumerable other mysteries, too!!
Open up the pages and behold the truth!!

How did Mr. Satan train to become stronger? Did he have someone like a martial-arts master…?
When Mr. Satan was young, he attended a fighting dojo called “Satan Castle”. Through a combination of considerable power and good luck (his rival fighting opponent would get food poisoning, for instance), he quickly became world champion and was called “Mr. Satan” after the name of his dojo. One day, at a bar in South City (where they were on tour), Satan and his martial-arts master made the mistake of making fun of Tao Pai-pai’s hairstyle. His master was killed, and Satan was heavily injured. From then on, Mr. Satan solemnly swore never to fight anyone whose true identity he didn’t know, or anyone who seemed crazy strong.
How did Mr. Satan win the Tenka’ichi Budōkai when Goku & co. weren’t around? He didn’t cheat, did he…?
No no, Mr. Satan really is strong. On an ordinary human level, that is. If a monstrously strong opponent turned up, he’d pretend he wasn’t feeling well and sit out the match.
Is there anyone else in Mr. Satan’s family besides Videl? It was written that his wife had already died…
There’s only the two of them in their family. But they’ve got loads of servants.

How did Bibbidi make Majin Boo? What process was there, what were Boo’s ingredients, etc…
Though in the manga Kaiōshin said that Bibbidi made him, the truth is that one called “Boo” was not actually created by Bididi, but has existed since time immemorial. He cycled between rampages and long hibernation. During numerous iterations of this cycle, he absorbed the evil elements of mankind, becoming steadily more violent. Bibbidi merely knew the means of calling Boo from out of his long slumber. Since the current Boo is a slightly different life-form due to the changes brought about when the evil Boo was expelled, it’s not known whether he’ll still go into long hibernation.
Majin Boo is invincible, but where does he get his energy from? It can’t be from all that candy he eats, can it…?
He doesn’t particularly need energy. It’s just that he likes candy.

*By the way, since the bad Boo was pure evil, he was easily purified in the afterlife, and was able to be reincarnated as Oob right away.

Please tell us (quietly) the spell that Bibbidi left behind in his notebook to seal away Majin Boo.
It’s unpronounceable for humans. Putting it into letters, I guess it’d be something like “Nuwemwittsimwawaay”.

The Kaiōshin are said to have the highest status in the universe, but how can you become a Kaiōshin?
No one can. Kaiōshin are born as Kaiōshin. There are three of them, and they work in shifts. Though there are two of them on duty now, if one of the Kaiōshin were to die in an accident, then the currently-inactive Kaiōshin would grow in the Kaiōshin Realm like a plant. If there aren’t any accidents, then it’s said their lifespans are about 75,000 years.1
Who was it that sealed the Elder Kaiōshin away in the Z Sword?
The Kaiōshin (who create planets) and the Gods of Destruction (who destroy them) have never gotten along that well, but once every 1,000 years they go to each other’s realms and hold a coordination meeting. At this time, they got into an argument over some trifling thing, and a certain short-tempered God of Destruction sealed Elder Kaiōshin away inside a sword. Naturally, it wouldn’t have been proper for him to destroy the Kaiōshin Realm itself. By the way, that God of Destruction was Beerus.

Kuririn and No. 18 live with Marron-chan at Kame House; I want to hear the story about how they came to have such a wonderful relationship!
Sorry, I’m really bad when it comes to romantic stories like this, so I can’t give you a straight answer. But I think that probably No. 18 (who used to be a delinquent) found Kuririn’s seriousness and straightforwardness refreshing, and somehow or other she ended up falling for him.
Vegeta’s got that famous line about a “bargain sale on Super Saiyans”, but does that mean he’s been dragged along to bargain sales by Bulma or Trunks?
As you might expect, he’s never actually been to a bargain sale. Bulma’s super rich after all, so I don’t think there’d be any need for them to go. Most likely he just learned about them from TV news or commercials he happened to watch.
Goku endlessly keeps getting stronger, with Super Saiyan 3 in the manga and Super Saiyan 4 in the anime; does Super Saiyan keep getting limitlessly stronger too? Might we eventually see things such as a Super Saiyan 5…?!
Super Saiyan 2 and 3 are nothing more than powered-up variations of Super Saiyan. After the fight with Beerus, Goku realized that mastering his normal state and Super Saiyan would raise his level more and sap less strength, so I think he probably won’t become Super Saiyan 2 or 3 any more.
Who created the Tenka’ichi Budōkai, and why?
It originated in a festival held since long ago at the temple which now serves as the tournament grounds.
The following translator notes are included for the benefit of the reader as supplemental information.
1 This answer seems to contradict, or at least work very heavily against, the explanation that Akira Toriyama provided in the 2009 guide book Super Exciting Guide: Character Volume, where the Kaiō and Kaiōshin are born of fruits from the World Tree as part of the Shin-jin race.
English Translation: SaiyaJedi & Herms
« Previous Page
Translations Archive