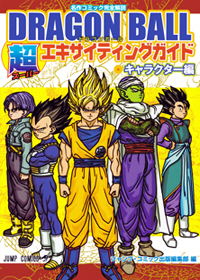 The Truth About the “Dragon Ball” Manga

Toriyama-sensei answers your inquiries about Dragon Ball’s characters and universe!
Characters
Why are characters’ names grouped into sets?
It’s tough coming up with names for a lot of characters. If you group the names into sets, it’s easier to think of them. For example, the one in control of the Saiyans and other villainous aliens is Freeza. Strictly speaking, Freeza is “freezer”, but I envisioned a refrigerator when I named him. So, I grouped the names according to foods that go inside it. The Saiyans are vegetables [yasai, “vegetables”], and the Ginyu Special-Squad are dairy products [gyūnyū, “cows’ milk”], like that.
What did you use as design motifs?
For non-humanoid lifeforms, with Cell, I tried to make him bug-like, but apart from that, I didn’t use any motifs in particular. “Namekian” comes from snails/slugs [Namek = namekuji, “snail”], but the only part I used as a motif was the antennae.
By the way, what’s Satan’s real name?
Mr. Satan is a ring name; his real name is different. Mr. Satan’s real name is “Mark”. (It’s an anagram of “akuma” [“demon”/”devil”].)1 In the area where Satan lives, names are not separated into surnames and given names, so his name is just Mark. His daughter Videl is not a ring name, but her real name. It’s an anagram of “devil”.
World
How did you come up with the ball-like cosmos?
I think it’s something I came up with so both I and the readers would be able to grasp the atmosphere of it easily. The big ball in the center is the world known as “this life” and “the afterlife”, and the one who watches over it from outside is Kaiōshin. Only, at the bottom, as though in opposition, a Makaiōshin2 exists, and governs evil. (Although right now, Kaiōshin’s power appears to be greater.)
Is Kaiō-sama a hereditary position?
Inside the big ball I mentioned before, there is a planet, called the World Core [Kaishin-sei] where the Kaiō are born and raised. It’s a world like a gigantic Planet Kaiō, and Kaiō-sama and his peers are born as Core People [Shin-jin]3 from the fruit of the World Core’s giant World Tree [Kaiju]. The planet’s population is about 80. Core People are neither male nor female, and their average lifespan is said to be about 75,000 years. At a castle that’s like a school, they learn a variety of things, and live an easygoing life; however, if a Kaiō dies on one of the Kaiō Planets, the next Kaiō is chosen from among them by lottery. However, a Kaiōshin is chosen only from Core People who are born from a special golden fruit, which rarely occurs. In addition, there are occasionally delinquent Core People with evil hearts; these ones fall under the Makaiō.
How do the Dragon Balls feel to the touch?
I think they have the properties of a hard, natural resin. Even if a hole is drilled in them or they get damaged, after a wish is granted and they disperse, the damage disappears once they return to being orbs, and they become like new.
How much is one zenny worth in yen? How much do Hoi-Poi Capsules cost?
It’s easy to understand: I envisioned them as the same as yen. With Hoi-Poi capsules, their price of course varies depending on what’s inside them. For example, a standard four-seater aircar capsule would be something like 1,480,000 zenny (1,280,000 zenny for the aircar, plus a capsule fee of 200,000 zenny). For most things, if you bring them to one of Capsule Corporation’s dealerships, you can have them converted to the Capsule System and be able to shrink them down for 200,000 zenny.

Of course, the price is higher than average for things like houses, which require more labor to convert to the Capsule System.

Can Namekians get nutrition from water alone?
I think the reason that Namekians can survive on water alone is because they have an enzyme in their bodies that converts water into nutrients.

By the way, I named the “Ajissa” seedlings that the Namekians grow after hydrangeas [ajisai]. That’s because snails, the Namekians’ motif, like hydrangeas.

Do Saiyans stay forever young?
Saiyans are a warrior race, so their aging slows once they reach an age suitable for fighting, and they maintain great strength for a long time. However, their lifespan is not much different from Earthlings’, and when they reach a certain age, they rapidly grow frail.

Incidentally, It’s not that their hairstyle never changes; Nappa went bald, after all. The states of Saiyan hair are also the same as Earthlings’; its properties are just a little bit different.

How many planets do Freeza and his forces have? Also, is it a company-like organization?
The planets he controls number in the several hundreds, I think. (Of course, this doesn’t include the ones he went and destroyed.)

Since time immemorial, the Saiyans have been a warrior race leading a violent and inhuman existence, making their fortunes by attacking many planets. Furthermore, Freeza and his forces were able to bring even the Saiyans under his control through sheer power. He’s the godfather of the racket. However, they4 were merely violent, and didn’t have an especially company-like organization.

Special Techniques
What techniques in Dragon Ball would you like to use?
Many of the techniques used by Goku and company are so overpowered as to be dangerous, but if I were to get a bit stronger, I suppose I’d like to have techniques like this:

I want to fly freely through the sky, of course!

This would be super-convenient for getting anywhere!

If you were to come up with a “new technique” for Goku, what sort of technique would it be?
Hmm, I think if an idea for a new technique had come up, I would have drawn it during the serialization. (laughs)
The following translator notes are included for the benefit of the reader as supplemental information.
1“Mark” has the syllables of ma – a – ku in Japanese, which is rearranged from akuma, which means “demon” or “devil”.
2“Makaiōshin” has the usual kanji for “Kaiōshin” (界王神, “world-king-god”) with ma (魔, “demonic”) appended to the beginning.
3The shin in Shin-jin means “core” in the sense of an apple core, suggested by the image in the book which shows an apple-like fruit. The text itself however is evocative of the story of Momotarō, where the main character is born from a giant peach; hence Herms’s preferred translation of “Pit People”.
4It is unclear whether “they” refers to Freeza’s forces, the Saiyans, or both.
English Translation: SaiyaJedi
« Previous Page
Translations Archive