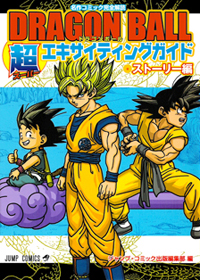 The Truth About the “Dragon Ball” Manga

What are the secrets of Dragon Ball’s birth? We went and asked Toriyama-sensei himself.
Goku
How was Goku born?
When I came up with Dragon Ball, I thought I would try to combine the Kung-Fu movies of Jackie Chan and Bruce Lee1, which I loved so much that I’d watch them on video even while I was working, with the classic Journey to the West2 to make an enjoyable manga. Naturally, the name “Son Goku” comes from the Monkey King of Journey to the West, as well. The reason Goku has a tail is also because I gave him a monkey motif. Only, in the original Journey to the West, they’re heading for India, but for Dragon Ball, I changed the ultimate objective to the easier-to-understand “gather seven orbs called ‘Dragon Balls’ in order to grant a wish” when starting the serialization. Be that as it may, my interest gradually shifted towards the growth and growing strength of the boy Goku, and it diverged more and more from the original concept based on Journey to the West.
1Kung-Fu movies of Jackie Chan and Bruce Lee — Hong Kong films where a hero skilled at Chinese martial arts (Kung-Fu) has an active role and looks cool. Jackie Chan and Bruce Lee are stars of those Hong Kong films. They often strike a pose and say things like “Acho!“; this originally started with Bruce Lee.

2Journey to the West — An old Chinese story. It’s the story of how a great Buddhist monk, accompanied by the Monkey King [Sun Wukong], Pigsy [Zhu Bajie], and Sandy [Sha Wujing], heads to India in order to obtain sutras. The Goku of this story is a prankster. Whenever he does something bad, the Vajra Band [Jin’ganglun], which was placed on his forehead by the monk, squeezes hard; he makes use of an extending staff [Ruyibang / Nyoibō], the cloud somersault [Jindouyun / Kinto’un], and Sage Wizardry [Xianshu].

Why does Goku’s hair turn gold when he becomes a Super Saiyan?
I decided on the design for the Super Saiyan for, to be honest… a simple reason that will leave you saying “What?”. I always have only a single person, Assistant-kun3, helping me with my work. That Assistant-kun’s time was always taken up doing the black fill4 of Goku’s hair, so the biggest reason was in order to save time. Because when he became a Super Saiyan, we wouldn’t have to do the black fill. It also had the effect of making it easy to tell from his appearance that Goku had gotten stronger, so it killed two birds with one stone. Only, at the time, it was considered that his strength would increase 50-fold when he became a Super Saiyan, but that was a bit of an exaggeration. My feeling as the creator is that, while drawing it, I felt that it was about a 10-fold change from what it was up to that point.
3Assistant-kun — The person who helps out with things like backgrounds and finishing touches. When you’re serialized in Weekly Shōnen Jump, it’s obvious, of course, but the deadline always looms. Incidentally… having one assistant is very uncommon (normally you’d have more).

4Black Fill — Solid black areas in manga, such as hair, are filled in with ink after drawing the outline with a pen. This is called black fill [“beta-nuri” in Japanese] When it covers a wide area, it takes some time for the ink to dry.

Training
How did you come up with the idea of training?
With regards to training, there wasn’t anything in particular I used as a reference. I think it was, comparatively speaking, full of very orthodox things that anyone could come up with. There are training scenes in the film Drunken Master5, as well; I suppose that part also became a reference for me. To Goku, Kame-Sen’nin’s training in manners and studies was probably the toughest. As for me personally… I’m afraid of heights, so there’s absolutely no way I’d train by climbing Karin Tower.
5Drunken Master — A 1978 Hong Kong movie starring Jackie Chan. A punk kid picks a fight with a hired assassin and has the tables turned on him; in order to win in a rematch, he trains day after day, and masters a martial art where he gets stronger the more intoxicated he becomes.
How did you come up with the Kamehameha?
For the Kamehameha, I thought I’d see if I could express “ki” energy, which can’t be seen with the naked eye, in a boys’ magazine sort of way. When no one was around, I did a variety of poses, and decided on one that looked cool, which was that pose. Incidentally, for the name “Kamehameha”, I was wondering whether there was a decent name along the lines of “something-something-Ha”, when my wife6 said as a joke, “Kamehameha would be fine, wouldn’t it?” so I used it as-is. Of course, it’s taken from King Kamehameha7 of Hawaii. I get asked if I look at a lot of martial arts to get hints for techniques or poses; while I have watched a lot of Kung-Fu movies, surprisingly enough, I didn’t have all that much interest in the martial arts themselves.
6My Wife — Toriyama-sensei’s wife is actually a former manga artist; they married during Dr. Slump’s serialization. She possesses magnificent drawing skill, and we hear that she would often help him with backgrounds and such at the beginning of Dragon Ball’s serialization.

7 — A hero who unified the islands of Hawaii, founded the Kingdom of Hawaii in 1810, and became its first king. Incidentally… the proper division of his name isn’t “Kamehame-Ha”, but “Ka-Mehameha”. “Ka” means “person” in Hawaiian, and “mehameha” means “lonely”; if you read them together, it becomes “the lonely one” ……A hero, yet he was called lonely; what a mysterious name.

To be honest, I’ve forgotten quite a lot of the story and events in Dragon Ball, but being the first time [Goku] brought down a frighteningly powerful foe… this battle is #1. Within myself, as well, I had come to see the direction8 the story would go in after that.

The character who it’s fair to say is my personal favorite, Mister Satan, appears. I enjoy his cheapness, and the brevity of the fight.

Moreso than being a showdown between two people, I like how Goku, who we’ve been waiting for this whole time, has finally arrived! To exaggerate things a bit, it would be fair to say that I drew out the Freeza arc for so long just for the sake of this scene.

To be honest, I greatly prefer these sorts of silly fights to serious battles. In what I found truly enjoyable while drawing the series, stories full of this sort of idiocy were at the top.

It’s where the Super Saiyan appears, to say the least. The time had come when I was finally able to follow through on my promise to Assistant-kun. And on top of that, I was able to express it very effectively, and the reception was good, so I have nothing else to add!

8The Direction the Story Would Go In — After things are concluded with Piccolo, the anime becomes a separate series, called the “Z arc”. “DB”, which was set on Earth up to that point, had both Piccolo and Goku discovered to be aliens. It would up its scale to become a grand tale spanning the whole universe.

9Recoom — A member of the Ginyu Special-Squad. He is the largest of the members, and possesses tremendous power and speed. For some reason, his way of speaking is quite playful, and his aesthetic sense is well-developed, so he has to call out the name of a technique in full before going on the attack.

10Bacterian — A cowardly competitor, using his overwhelming stench to force his opponents into losing by ring-out without a fight. Later on, he was targeted by Piccolo’s henchman Tambourine as a “strong man who appeared at the Budōkai”, but if they had fought, would Tambourine have been able to withstand his smell?!

What is the key to winning in battle?
In battle, the most important thing is the size of your ki, and your control over it. Ki as a concept of course includes such spiritual powers as energy [genki], courage [yūki], and right-mindedness [shōki]11. No matter how much you train, there are limits to physical strength, and the only way to overcome that is through ki. I think Goku was able to approach the mightiest warriors in the universe through strengthening his ki.
11Energy, Courage, and Right-Mindedness — The word “energy” [genki] is well-known, but if one asks if you do not have energy if you have even one sickness [byōki], it is difficult to come up with an answer. There are people who are healthy yet do not have any energy, and there are people who are sick, yet full of energy. Plus, even among people who have roughly the same power, for example, there were people who gritted their teeth and stood their ground when Demon King Piccolo attacked them, yet there were also people who trembled and fled. Thinking about it this way, perhaps you will understand that a variety of different “ki” are indispensable in battle. In the world of Chinese martial arts, exemplified by T’ai-chi Ch’uan, ki training and control is given great importance.

In Dragon Ball, the dark mage Bobbidi invented a machine that measures and absorbs ki, but current science cannot measure ki levels or store it anywhere. However, when someone cheers you on, you can “receive energy and courage [yūki]” from them. “Ki” is something that cannot be seen with the eyes, yet it is there.

She’s bossy, but seems like she’d give me at least an air car if I became friends with her. She might make some incredible inventions for me!

He isn’t too loud, he’s polite, and he works hard.

It seems like we’d get along, with our perverted tendencies.

The truth is he’s quite a sensible person, and he seems like he’d be the easiest one to be around.