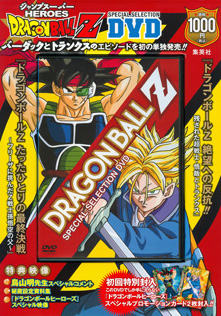 I’m always forgetting things to begin with, so I have almost no memory of drawing the character design for Goku’s father Bardock and co.

I think what probably happened was, somebody from the animation company came to me and said, “we’d like to do an original story based on these designs…” and when I had them show me the sketches, I ended up redoing them.

I had my hands full just with Dragon Ball’s manga serialization, and I basically left the anime up to Toei Animation, so that sort of situation was rare. Perhaps it was because the content impinged upon the past of the main character that I was specially called upon to be involved a little bit with the character designs.

Well, even calling it a “design”, with regards to Bardock, all I really did was take Goku and give him the brutal edge of a warrior race, and dress him in the battle armor provided by Freeza’s forces, so I can’t have gone to too much trouble.

When I saw the finished episode, I remember feeling a good bit of admiration. With my works, I prefer lighthearted fare, so I have a tendency to avoid serious material. Even if I had written about the same past, it would have become lighter in tone by far. Thanks to this, I felt as though even Dragon Ball had been given a little bit more depth.

By the way, “Bardock” refers to burdock [in Japanese, ‘gobō’]. I didn’t realize it, not usually saying it in English, but “burdock” is a pretty strong-sounding name, isn’t it? 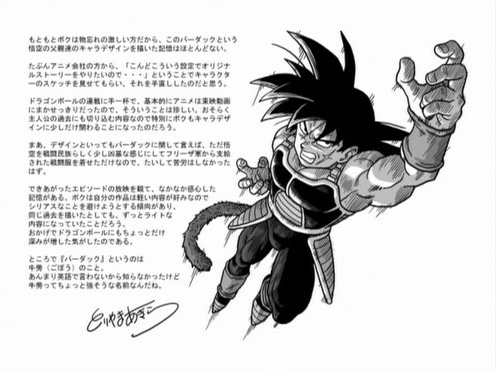