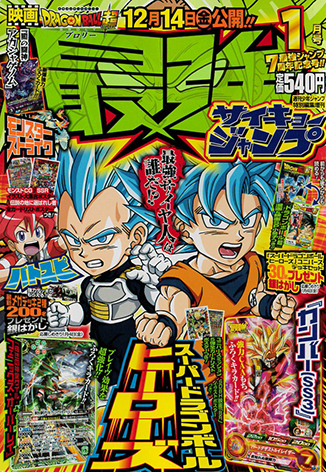 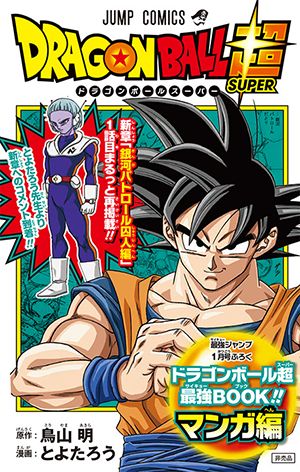 A Message From Toyotarō-sensei Has Arrived!!
We have finally entered a new chapter! It is a completely new work that is not in the anime or anywhere else.1 Unlike Jaco, this Merusu2 guy in the first chapter is a genuine elite member of the Galactic Patrol! Just how strong is he really?! Why has he come to Earth?! And who is this criminal that he says has escaped?! With the “Galactic Patrol Prisoner Arc”, I’m teaming up with Toriyama-sensei and getting a lot of praise as I make it! I’m hoping to make it an enjoyable story that will thrill you all, so please look forward to it! The booklet includes a reprint of the arc opening in Chapter 42.3
The following translator notes are included for the benefit of the reader as supplemental information.
1 At least as of the publication, the “Galactic Patrol Prisoner Arc” is exclusive to the Dragon Ball Super manga by Toyotarō as serialized in Shueisha’s monthly V-Jump magazine.
2 メルス (Merusu) may be a reference to and play on 鯣 (surume, or dried shredded squid), which would fit with Jaco’s own presumed name pun referencing 雑魚 (zako).
3 This comment was originally published in the double-sided Dragon Ball Super Strongest Book!! supplemental booklet published alongside and distributed with the January 2019 issue of Saikyō Jump; it is the “Manga Edition” side that contains this material as originally published in the January 2019 issue of Shueisha’s V-Jump magazine on 21 November 2018. The “Movie Edition” flipside of the book focuses on the Dragon Ball Super: Broly theatrical film.
English Translation: Herms
« Previous Page
Translations Archive