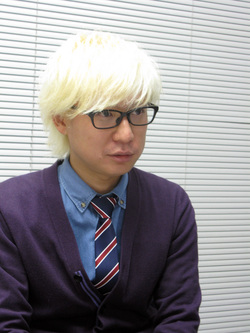 The 33-year-old scriptwriter of the movie Dragon Ball Z: Battle of Gods tells of developments [that made him go] “Seriously?!” and how “Vegeta is the unofficial star”
by Akiko Watanabe / 13 March / Animation, Movies

Dragon Ball Z, which has devoted fans the world over, will be presenting Battle of Gods, its first new film in 17 years. Creator Akira Toriyama’s serious involvement with the story and character designs has been a topic of discussion with this work, but just how has it been finished up? We went directly to Yūsuke Watanabe, who handled the script.

Akira Toriyama-sensei felt strongly that it should be a positive and forward-looking story.

The TV anime Dragon Ball began airing in 1986. That’s roughly 27 years ago. Watanabe, who had yet to start elementary school at the time, says he remembers it in detail.

“If I remember correctly, it was the day before my kindergarten graduation ceremony. After the final episode of Dr. Slump — Arale-chan, which I’d watched up till then, ended, the preview for Dragon Ball started; that really left an impression on me. ‘It looks like an interesting anime’s about to start,’ I thought. I watched it from then all the way until Dragon Ball Z ended, and they say I started buying Weekly Shōnen Jump because I wanted to know what happened next in the anime. Back in kindergarten, I never would have thought that one day, 27 years later, I myself would be writing the script. (laughs) I want to tell him, ‘Don’t you cut classes.'”

Watanabe, who is now 33, is truly part of the “Dragon Ball generation”. He recounts his surprise when the offer came on a work that he had loved since he was a child.

“I thought, in a word, ‘Seriously?!’ (laughs) First of all, I was surprised that it was going to be a movie, and then, ‘Now?’ and also, ‘Me?’ I’d done nothing but live-action, so I’d never written a script for animation, plus I’m young in terms of age. I thought someone who was more of a veteran, who had written [this kind of thing] before, ought to be doing it.”

Up to now, Watanabe has handled a large number of movies based on comic books, such as 20th Century Boys and GANTZ. His track record with them is thought to be the reason for his being specially chosen, but at any rate, this is his first time doing the script for anime. In what sort of way did the work progress?

“I showed [my idea] to Toriyama-sensei, saying, ‘I’d like to make it this kind of story,’ and what came back was already finished up like a script. (laughs) At first I’d thought about the themes of ‘good and evil’ and ‘what is a hero’ with a bit of a serious feel. But Toriyama-sensei seemed to to feel strongly that, since the [2011 Tohoku] earthquake, he wanted it to be, not a tragic story, but a positive, forward-looking story, of friendship and camaraderie, and the story took shape like that. It was like, ‘This truly is Dragon Ball.’ What was I doing? (laughs)”

In that process, he says there were many scenes where he was made to notice all too well the difference between live-action and animated works.

“It really is completely different, in terms of [the amount of] information. If I were to make the same script in live-action, I think it’d take about three hours. Of course, even saying the same lines, the voice actors are faster, and the movements in animation are faster. Scenes where boulders are destroyed and such, which would take a huge amount of time to do in live-action, take an instant. Live action is human drama, or rather, I think there are many parts where the actors tell us things through their facial expressions, but in animation, I felt that you really have to compensate for that through the amount of information [in the script].”

As has been previously announced, the various characters who have colored the world of Dragon Ball up to now will all appear together. As Watanabe himself states “they’ve all got alcohol in them, so they can’t help it (laughs)”, the interaction full of a festive mood that unfolds with the all-star cast is one of the highlights. He says one must pay attention to that person in particular…….

“I believe that Vegeta is Dragon Ball‘s unofficial star. It’s different in the serialization, but in the Kanzenban comics, the final panel ends with Vegeta1. That Vegeta really struggles this time. So it’s as though, ‘Vegeta, you’ve really grown~’.”

On the other hand, the fact that many of the staff members on-site had experience with the Dragon Ball anime has influenced this work greatly. The techniques and the feelings for the characters that they’ve cultivated over many years, which have not changed in spite of the change in times, have been brought to bear in this work. It’s enough for feelings of sentimentality to well up, particularly for those adults around their 30s, who experienced [the series] in real-time.

“I believe that the theme of Dragon Ball is excitement. When I was a child, I watched it in a state of excitement, and I wrote the script in excitement, and on top of that, that feeling of excitement is something a lot of people share. It’s nice to go to the theater as parents and children, then the have the dad explain things to the kids. Like, why Kuririn’s hair is that length. (laughs)”

However, the pressure in being involved with a work with worldwide popularity is immeasurable. At this time, just before its opening, Watanabe lets out a joyful scream at his predicament.

“Through Twitter and Facebook, a lot of questions come to me. Each time, I answer courteously, but I can’t keep up. They even come from places like Colombia. (laughs)”

The size of this reaction is a testament to the greatness of the content of Dragon Ball itself. It is a project that many people around the world have been eagerly awaiting, and the surge of anticipation of those who want to see it soon has already crossed the seas and spread to the rest of the world. “I wonder if we could postpone the opening. Once it opens, it’ll be over (laughs).” Watanabe’s frank thoughts, in contrast to the feeling of “wanting to see the movie soon”, are somehow linked to his complicated feelings as a fan.

“Everyone’s a fan of ‘Dragon Ball’, right? I can’t image there are very many people who dislike Dragon Ball. In that sense, too, I’d like people to go see it with their children, with friends, with all sorts of people. I’d like for people to fill in what’s not shown with their imaginations while they talk about it, and especially, for adults to return to a childlike state and watch it, while remembering old times.”

A Dragon Ball no one has ever seen, aiming to “recapture the passion!”

Being a work supported by a broad generation [of fans], and being the first new movie in 17 years as well, this work awaits release on the greatest stage of all; the finished product is, in a good way, something that is “not serious”. Brushing aside various competitive drives and pressures, the content is one that brings across the feeling that it set out to achieve, that of adults “recapturing the passion!”. Perhaps this work is a Dragon Ball that no one has ever seen, and at the same time, the Dragon Ball that everyone wanted to see. [Watanabe] earnestly wishes for many people to see the whole picture with their own eyes.

The following translator notes are included for the benefit of the reader as supplemental information.
1 For the Kanzenban re-release of the series, Akira Toriyama re-draw and slightly adjusted the ending to the series. The final volume (#34) released in April 2004 contains these changes.
English Translation: Julian
« Previous Page
Translations Archive