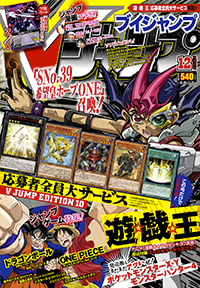 The Super-Elite(?!) of the V-Jump department, Terashi, explores everything about Jaco!!

What is Tera-P?!
It’s a project brought to you each month by different member of the V-Jump editorial department, where they do whatever they want!! This time, it rotates over to Daisuke Terashi, with “Tera-P”!!

In Commemoration of the Conclusion of
JACO THE GALACTIC PATROLMAN
Approaching the first work in years of the legendary Jump author!!
Akira Toriyama-sensei‘s latest work was — incredibly! — linked to that work that we know so well. This time, I’m going with a big special report about Jaco.

What are the origins of the characters’ names?
This time, apart from Tights, I unified them around food-related names. By unifying them, it’s easy to come up with names, so I’m always using this method.
What is the meaning of the mark drawn on the spaceship and on Jaco’s body?
In my mind, the Galactic Patrol would have this kind of mark. The Galactic Patrol that appears in Sachie-chan GOOD!! and Jiya, which I wrote for my close friend Masakazu Katsura-sensei, also has a mark close to this one.
What was the Galactic Patrol doing when Raditz and then Vegeta were attacking Earth?
Even though they’re called the Galactic Patrol, they only stand a chance against Saiyans when they’re children, and the Extinction Bomb doesn’t work on them. Naturally, they have no choice but to “turn a blind eye” to people like Freeza.
Why did you link [the series] with Jaco in the final chapter?
This manga was suited to a slightly old-fashioned setting, so I went with that. If it stayed like that, however, I’d just be a retro-fancying, middle-aged cartoonist, so I felt that it needed a reason for the old-fashioned setting, and added that on intending it to be a bit of a surprise. Because of that, I treated the final chapter as an extra. (By the way, Bulma’s having a much-older sister is that, at the time of Battle of Gods, Bulma’s parents have reached a ripe old age of at least 70, yet they didn’t really look it…. Well, more than anything, it’s because [Bulma’s] an incredible inventor. ♥)
What was the catalyst for you coming up with the story of Jaco?
About 10 years ago, I had written a story [for someone else to draw] with contents just about like this. I’ve loved these inconsequential space-alien stories since way back. Although, it was just the story, so it was a bit flashier, and the tempo was sped up. Actually, I had intended to go with different contents for this short-term serial, but by sheer coincidence, there were parts that overlapped with the God of Destruction in Dragon Ball Z: Battle of Gods, so I changed it to Jaco. However, I was the one who did all the inking this time as well, so I rewrote it to have the kind of quieter, more relaxed contents that I prefer.

[Terashi]
What shock did those who are now making Dragon Ball receive?!
Toriyama-sensei used Jaco as a grand device. It must have provided many people who have been involved with Dragon Ball with surprise, emotion, and stimulation. I learned of “the enjoyment of expanding a [fictional] world” but, what did people who are, for example, truly expanding the Toriyama-World right now, get out of Jaco? [To find out], I asked three creators for their thoughts on Jaco!!

Currently serialized with Dragon Ball SD in Saikyō Jump!!
Naho Ooishi-sensei
Jaco the Galactic Patrolman was wonderful! In Jaco‘s familiar-yet-new world, I was happy every time I ran across a familiar face; when the words “West City” appeared, I got fidgety [thinking], “Could it be…?”; when I learned the name “Tights”, I couldn’t contain my excitement, [thinking] “This is…!”; and just as I thought, I got teary-eyed at the final chapter. Toriyama-sensei, thank you so much for this wonderful tale! 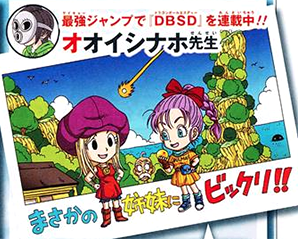 “Surprise at the unbelievable sibling-relationship!!”

Currently serialized with Dragon Ball Heroes: Victory Mission in V-Jump!!
Toyotarō-sensei
The connection with the Dragon World, was shocking, and it moved me!! I want Drs. Omori and Brief to… No, no; here, I definitely want to see their interaction with Dr. Gero! …So, I gathered together all the scientists of Dragon Ball. 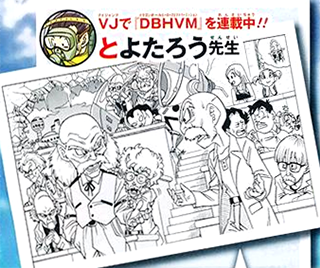 The up-and-comer from Dragon Ball Heroes!!
Engineer Yoshito-kun
I had my eyes on this exciting story every week! …With that in mind, Terashi-san! Would it be OK to have Jaco appear in Dragon Ball Heroes?! No? I want him to appear!! 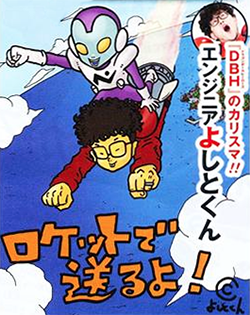 “I’ll take you there by rocket!”

V-Jump Cartoonists’ Museum
A mega-rare project to approach the cartoonists of V-Jump, who are normally shrouded in a veil of mystery!! There might even be some seriously awesome information!! 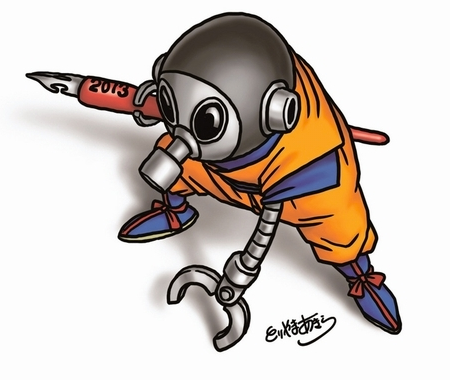 Author of Jaco the Galactic Patrolman
Akira Toriyama-sensei Profile
Made his debut in 1978 with Wonder Island. He began the Dr. Slump serial in Weekly Jump 1980, and Dragon Ball in the same magazine in 1984, recording big hits with both. He also has a large number of other works, such as COWA!, Sand Land, and the Neko Majin series.

From the perspective of the supervising editor,
“This is what’s great about Toriyama-sensei!”

Supervising editor: Daisuke Terashi1
I don’t even need to tell you… at any rate, he’s amazing!! You all know that, right?!

I also asked Toriyama-sensei about things other than Jaco!!

What person/work/etc. has had the greatest influence on your manga?
Speaking strictly about Dragon Ball, it’s Enter the Dragon with Bruce Lee and Drunken Master with Jackie Chan.
Please tell us your number-one favorite hero and heroine from cartoons around the world.
I read manga back when I was an elementary-schooler, but after that, I lost myself in movies, illustrating, and plastic models, so nothing quite comes to me. If I had to say something, I suppose it’d be Astro Boy. In terms of the art, I admired Disney films and Tom and Jerry from a young age because they were really well-done. Even as a kid, I got a real shock at seeing the difference with Japan in terms of things like drawing skill.
Do you have any favorite manga?
For the same reason as above, I can’t really think of anything in particular, but when I occasionally read a little bit, I really think, “everyone’s incredible”. The level of the content is really high in Japanese comics. Of course, the reason I don’t read many comics even though I’m a cartoonist is because I’m busy with work and already have my hands full with plastic models and other hobbies, and not because I dislike them.
Do you have any favorite games?
Again, for the same reason as above, I don’t play games very much; I do have experience losing myself in various things like Dragon Quest and Mario way back, but now I try not to touch them2. Although I did previously have a little fun with a tank game called Panzer Faust, because I was interested in it. As I also do games work, I often observe what my son is playing, as a reference. It looks like a lot of fun, but it wouldn’t be good if I got hooked, so I really don’t touch them. There was even a time when everyone in my family but me was playing Dragon Quest on the Game Boy, and I couldn’t follow along with their lively conversation topics…
How do you feel after having finished drawing Jaco?
I was able to take the time to draw it all the way to the end by myself, so I’m filled with such emotion. It’s a work I love alongside COWA! and Sand Land, which I also drew in short-term serials. However, it’s too bad that none of them were popular!! To be honest, I personally have much more enthusiasm for these inconsequential-feeling manga to flashy ones. I am pretty twisted as a rule, so it seems that in all things, my own sensibilities are quite different from the public’s.
Bulma, who appeared this time, would go on to play a variety of roles later on in Dragon Ball, but in your setting, Sensei, what did Tights do after that?
It’d be bad if got into a tough spot later on by saying that much, so I’ll refrain from answering.
Why are Jaco’s favorite foods milk and cheese?
I needed some kind of food that Jaco could also eat on Earth, so I went with milk. Except that, looking closely, Jaco has teeth, so feeling that he must also eat solid foods, I added cheese.
Are Galactic Patrolmen all the same aliens?
There are lots of different types of Patrolmen. It wasn’t particularly necessary [to say] what planet they were from, so I haven’t decided.
Lastly, a message for the readers of V-Jump!
Jaco has no flashy action, and it’s not like any super-strong or cool characters appear. Furthermore, it’s not a deep story, and there’s nothing that will move you. Allowing you to feel a small happiness with light-as-a-feather content is my greatest objective and challenge. So please, try to keep reading to the end in one go. It’s a slightly weird trifle of a manga, and I’ll be happy if you get a chuckle out of it.

The following translator notes are included for the benefit of the reader as supplemental information.
1 The meaning here is unclear. It may mean that Terashi is the editor with respect to Dragon Ball-related content in V-Jump and Saikyō Jump, as it was previously established through the “Jump LIVE!” app that Toriyama’s Weekly Jump editor for Jaco was Kōhei Ōnishi.
2 As he explained in another interview, he got so caught up in video games that his wife forbade him from playing for a while….
English Translation: SaiyaJedi
« Previous Page
Translations Archive