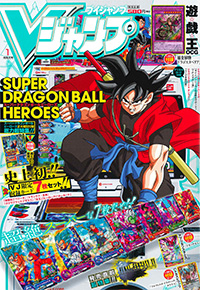 A thorough analysis of all the tough foes from throughout the series!

We’re looking back on all the rivals who have traded blows with Goku, while displaying the V-Jump editorial department’s own personal degrees of danger for them.

■ Rival 1: Instantly wiping out planets, the God of Destruction Beerus!!
Waking up after 39 years, Beerus is interested in the Super Saiyan God, with power on par with his own. Hearing that Super Saiyan God is on Earth, he battled Goku there.

Beerus:
Degree of Danger:
*********
Universe 7’s God of Destruction. He is fickle, and will destroy planets when in a bad mood.

■ Rival EX: Goku’s one and only eternal rival, the Saiyan prince Vegeta!!
During the battle with Golden Freeza, Vegeta shows off his Super Saiyan Blue form for the first time. He battles against all sorts of rivals together with Goku!

Vegeta:
Degree of Danger:
***
The Saiyan prince, who views Goku as a rival. He constantly trains to beat Goku.

■ Don’t Forget These Rivals!!
Here’s a run-down of some of the oddball rivals such as Ginyu, leader of the Ginyu Force, and Monaka, the strongest man (?) in Universe 7!!

Ginyu:
Ginyu returns after having become a frog and battles Goku again, but loses.
Monaka:
A quiet boy claimed to be the “strongest in Universe 7”. He and Goku square off, but it’s actually Beerus disguised as Monaka.

■ Rival 2: Back from Hell, the ruler of the universe, Freeza!!
After spending his days in constant humiliation in Hell, Freeza is resurrected. To get revenge on Goku, he throws himself into training, and attacks Earth again. However, he is stopped by Goku and the others.

■ Rival 3: Hiding power on par with Beerus, the God of Destruction Champa!!
Champa becomes envious of Beerus’ Universe 7 Earth once he learns it’s full of delicious food. As part of his plot to take Earth, he holds a martial arts tournament with Universe 7 and gathers the strongest members from Universe 6.

■ Rival 4: Plotting to eliminate all humanity, Goku Black!!
The candidate Kaiōshin Zamasu had deep misgivings about humanity. He used the Super Dragon Balls to take Goku’s body in the future, and as Goku Black plotted to exterminate humanity, but was defeated by Goku who came from the past. Transforms into Super Saiyan Rosé!! 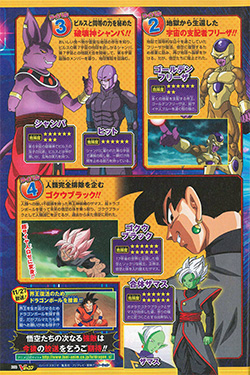 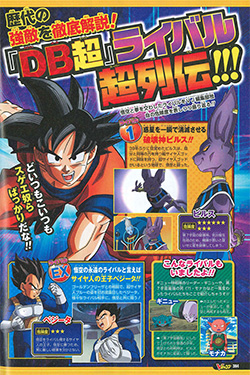