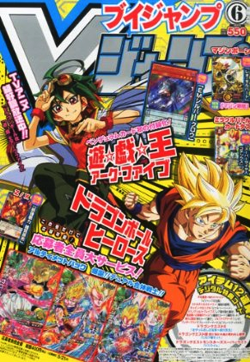 The Two Other Stars of the “Majin Boo Arc”!

The broadcast of the “Majin Boo Arc” has begun at last! A talk between the pair who play Majin Boo and Mister Satan, who hold important keys to the tale, is now a reality!!

Unshō Ishizuka–san
Profile
Affiliated with Aoni Production. Born on 16 May [1951]. Has lent his talents to JoJo’s Bizarre Adventure: Stardust Crusaders (as Joseph Joestar), among many other works.

Kōzō Shioya–san
Profile
Affiliated with Aoni Production. Born on 18 August [1955]. Has lent his talents to Toriko (as Kuribo) and One Piece (as Pappug), among many others.

What is the Appeal of the Reborn “Majin Boo Arc”?!
The Boo arc of Z was broadcast about 20 years ago; did your impressions [of your roles] change from before?
Shioya: In my case, I’ve had a lot of opportunities to play Boo in games and such, so my impression of it didn’t change all that much.

Ishizuka: I’ve been playing the role of Satan since the Cell arc of Kai, but at first it was relatively tough. The staff told me, “act your way, Ishizuka-san,” so I tried as best I could not to be conscious of it [i.e., the late Daisuke Gōri’s performance], but around the end, I pushed it back, figuring “enough, already”.
(laughs) From around that point, the show got interesting, and I was able to get into the swing of the performances of (Masako) Nozawa-san and the others. So this time as well, I’m able to have fun playing the role.

Shioya: When the recording for Kai started, right off the bat, I asked, “who’s going to play Satan?” Then I learned that Ishizuka-san was going to play him, and I was incredibly happy.

Shioya: When you performed as Satan with me for the movie [Dragon Ball Z: Battle of Gods], Ishizuka-san, it was easy to act, and the performance was fun.

Ishizuka: The studio is full of talented actors, so in a good way, I was able to act while goofing off, which was probably a good thing.

Please tell me your impressions of each of your characters.
Shioya: The Boo arc [shows] Boo’s growth through Satan, so I believe that in a way, it’s a tale of friendship between the two. Satan is with him until the very end. It’s interesting how only Satan and the dog are able to relate to Boo. It’s like they’re companions.

Ishizuka: He’s like a comedian. (laughs) People around me keep telling me, “That’s a sweet gig you’ve got there.” (laughs) In order to have as few preconceptions as possible, I tried to act one episode at a time, but I think probably, the fact that he’s lived his life with this all-hype reputation of “the world’s strongest man” despite being so weak compared to Goku & co. actually made it easier for him to get along with Boo. Boo as a character is something of an airhead, but he’s actually incredibly strong. I can imagine that it’s precisely because [Satan] can’t comprehend how scary he is that Boo also let down his guard and was able to go along with him.

Shioya: Boo believes that Satan is a good guy until the very end, and Satan also seems to be spurred on by that.

In the recording studio, they can feel young again!

This work has many veteran cast members; is the atmosphere any different from recording for other series?
Shioya: In a way, it’s easier. Depending on the episode, there are even times when I’m the youngest one there. (laughs)

Ishizuka: Even now that you’re 50-something? (laughs)

Shioya: It’s not something you get to experience often. When I appear as a guest in other works, if I’m clearly the oldest person in the room, I actually sort of become a shrinking violet. Nobody jokes with me, and thinking that they probably don’t know who I am, I stand quietly in the corner. (laughs) With this work, I can relax and put myself in their hands, because there are senior members I can rely on.

Ishizuka: I’m always really looking forward to going to the after-party with everyone after we finish recording. (laughs)

Shioya: Nozawa-san takes the lead in splitting the bill. I’m grateful for that.

Ishizuka: It’s nice how we can talk about all sorts of things with the other cast members after recording. Plus, even with people like me who came on-board partway through, thanks to these parties, I’ve been able to fit in like I’ve been there for ages. It’s a bargain twice over. (laughs)

Shioya: Back then, we recorded in the morning, but we record at night now, so it works out perfectly, time-wise. Well, we always talk about basically the same things, though. (laughs)

Ishizuka: You’re right. (laughs) But every time, we get into it like it’s a fresh conversation.

Shioya: When you’re in a place like that, even with the same people as always, you get to see a different side to them. That’s also a lot of fun.

Ishizuka: They really do have a side that you don’t get to see in the studio alone, which is also connected to their performance. It’s also an easy place for the staff to discover a new side to the younger kids [i.e., the younger members of the group]. In that sense as well, this is a good old production. Maybe it’s weird to say it’s old, since it’s a new show? (laughs)

The difficulty of differentiating performances.

When it comes to Dragon Ball, the powerful battle scenes are appealing as well.
Shioya: Nozawa-san is amazing. I’m not in any position to say so [considering my age] (laughs) but at her age, she’s constantly performing these battle scenes.

Ishizuka: The battle scenes continue on quite a bit, right from the first half.

Shioya: And this time, for Kai, we do retakes for all our lines. The [recording] environment has changed a lot since the Z era, but her fire hasn’t changed one bit.

Shioya: (laughs) You didn’t do that sort of differentiation for Satan?

Ishizuka: Well, with Satan… I suppose the times when he gets excited are tough. (laughs) But it’s a lot easier compared with you two. Only, the viewers would probably get tired if it was nothing but battles, so I was conscious of getting them to laugh when they saw Satan. I brought out an extreme gap between my performances as the prideful strongest-man-in-the-world, and as kind of an idiot.

Shioya: Certainly, if it continues on with nothing but battles, even the performers get tired, and you’d get tired even watching it. So you had that sort of technique. I just learned something new. (laughs)

Lastly, please introduce the highlights and give a message to the readers.
Shioya: Kai this time has been wrapped up to be extremely compact compared with Z. The audio is markedly better, so I think that not just those who are watching the “Boo arc” in animation for the first time, but also those who have seen it before, will be able to enjoy watching.

Ishizuka: At any rate, it’s an enjoyable work with a good pace. There aren’t that many works where you get this much feedback with your performance. By all means, please watch and look forward to it.

Thank you very much!
English Translation: SaiyaJedi
Back to Previous Page