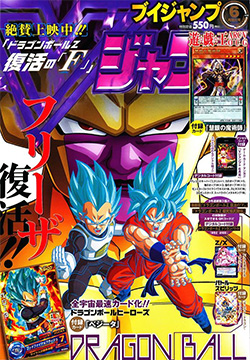 The hit new film Revival of “F” is in theaters now. The evilest of villains, Freeza, makes a comeback in this movie, and his voice actor Ryūsei Nakao has told us all about the film’s highlights!

Revival of “F” has finally debuted.
I felt pretty sad that Freeza didn’t get a speaking part in the last film, Battle of Gods, so I was thrilled when I heard that the next film was going to be all about Freeza. It’s been a beloved franchise for a long time, so even now I still get the opportunity to play Freeza in games and whatnot, but I was really happy for them to put out a new movie labeled as Freeza’s resurrection.
In the film you evolve into “Golden Freeza”. What were your first impressions?
Personally I associate Freeza with “white” and “purple”. So when I first heard “golden”, I couldn’t even imagine what that would be like. Then I saw the images, and it literally was just him turned golden (laughs). Dragon Ball has Super Saiyans, so “golden” is nothing rare. Maybe because of that, in the film Freeza himself says that he “gave golden a try”, as if he’s looking for feedback. Even the name Golden Freeza is something Freeza coined himself (laughs). But this evolved Freeza is definitely worth seeing! I think watching carefully when he evolves is particularly interesting.
Were there any parts of your performance that you changed for this revived Freeza, compared with back in the TV series?
Obviously Freeza’s essence is the same as before, but he’s also more evolved now. I played Golden Freeza as if he were “evil perfected”. It was lots of fun putting all the emphasis on “evil” in my performance. In the last film, Battle of Gods, the story reached godly proportions, so I tried to ramp the level of evil up to match (laughs).

★★ Taking on the recording session with triple the battle power!?

How are the battle scenes between the evolved Goku and Golden Freeza?
This time around I recorded the whole thing with Mako (Masako Nozawa), but Goku and Freeza’s battles in the film are really fast paced, even before they transform! It got to the point where I couldn’t tell where I was punching and where I was kicking (laughs). So we had to pause the video each time to check. We recorded all the battle scenes in one go, but it was really tough.
By the way, how high is your battle power voicing Freeza this time around?
I’m about triple what Freeza was back in the old days… So I guess I’ve reached a battle power of over 1.5 million (laughs). Normal Freeza’s 530,000, but I’m matched up with movie Freeza’s evolution. That’s how fired up I am.
This is Freeza’s first time appearing with the God of Destruction Beerus and his servant Whis.
Personally I really liked that conversation between Beerus and Whis. Beerus talks back to Freeza very rudely (laughs). It was fresh seeing Freeza be anxious talking to someone. Also, I’ve performed with Beerus’ voice actor, Kōichi Yamadera, for a long time on another program1, so I was pleasantly surprised to get the chance to work with him on Dragon Ball.

★★★ The highlight is Freeza before his revival!?

What’s your favorite scene?
There’s this underling named “Tagoma” who’s said to be about as strong as Zarbon or Dodoria in the film, and Freeza’s conversation with him makes it clear that he never really considered those two to be all that strong. When Sorbet hypes up this guy’s strength, Freeza just very bluntly goes “Oh, really?” (laughs) I thought that part was hilarious.
The main character from Akira Toriyama-sensei‘s latest manga Jaco the Galactic Patrolman makes a guest appearance in the film. Did you know about that series?
Yeah, I read the collected edition. I can’t believe Bulma had an older sister (Tights)! I always discover something new whenever I read a Toriyama manga. Now that I’ve read it, it’s fun to see where Jaco will turn up next.
Tell us the highlight of the film.
The film shows how Freeza’s been spending his time before getting brought back to life, and I think that part is pretty interesting. I bet you’ll all be shocked (laughs). I was shocked too when I saw the images: “Oh, so this is where he’s been!!” Then there’s the ending as well. Stay in your seats and enjoy the ending all the way to very end!!
Finally, give a message to any readers going to see the film.
I think this movie will be a lot of fun not only for those familiar with the old TV series or Dragon Ball Kai, but for newcomers as well. You’ll discover a lot watching this movie, so please watch it with your family! I think it’ll make the film more enjoyable if parents and children fill each other in on Easter eggs and back-story after watching it. Some readers may find that their parents know more about the series than they do (laughs). My whole family is going to see it.
Thank you very much!
The following translator notes are included for the benefit of the reader as supplemental information.
1 Nakao is likely referencing Anpanman here; Nakao voices Baikinman (the man antagonist), while Yamadera voices Cheese (Anpanman’s dog) along with other miscellaneous recurring characters.
English Translation: Herms
« Previous Page
Translations Archive