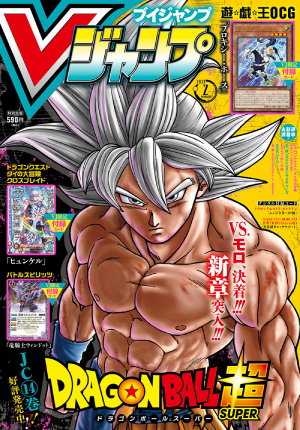 In celebration of the conclusion of the
Galactic Patrol Prisoner arc:

What are your thoughts on having finished the Galactic Patrol Prisoner arc?
Since this was a completely new story that no one had any prior knowledge of1, unlike the Universe Survival arc, I felt very nervous, but at the same time, I also managed to have a lot of fun drawing it! It was something made through a lot of trial and error, but I think I was able to draw the best story that I am currently capable of as an artist.
Out of all the new characters that debuted in the Galactic Patrol Prisoner arc, which one is your favorite and why?
There are a lot of Galactic Patrolmen this time around. I like all of them, even the nameless background characters, but the one I like the most is probably Merusu. He’s a character with a lot of attributes we hadn’t seen yet, so drawing him was pretty hard, but it’s precisely because of that that I was able to better understand his feelings and he became my favorite character.
What are you excited about going onto the “Granolla the Survivor arc”?
It took even longer to come up with ideas than with the last arc, but it was all worth it, and Toriyama-sensei came through with a fantastic draft for us.2 There’s still nothing I can say for now regarding the actual story, but we included a lot of twists and new reveals so that we think the readers will enjoy it immensely. I’m gonna heat things up more than ever before, so please, everyone, be sure to give me your support!
The following translator notes are included for the benefit of the reader as supplemental information and were not originally published in the book.
1 Toyotarō is referring to the fact that this is the first manga-only/original story arc in Dragon Ball Super; there was no animated version of the arc that preceded it for anyone to know what the story would be.
2 Toriyama is being credited with a draft (原案 gen’an), an outline for the story arc.
English Translation: Zenpai & SaiyaJedi
« Previous Page
Translations Archive