Shouldn't it be called UniverseS 7? It has the Mortal World, Demon World, The Afterlife, and Supreme Kais realm. All of these are separate realities, seperate Universes. Kaioshin realm exists outside of all of them and revolves around them for example. And the Afterlife is much larger than the Mortal World, since it contains Heaven a planet that's as big as the Mortal world/Universe. So what's the deal? Nothing says they're apart of the same "fabric of reality" any databook info that sheds light on this?
Top

Those are separate dimensions that are part of the same universe.
Cool stuff that I upload here because Youtube will copyright claim it: https://vimeo.com/user60967147
Top

Yeah basically each universe is made up of several dimensions. Universe 7 even has the room of spirit and time which is its own separate dimension. Within the DB cosmology, a single universe encompasses quite a lot.
Top

Yeah technically I believe it is called a "microcosm" in the sense that it has a couple dimensions within it. Ultimately I think all Universes have something very similar so it makes sense to consider each one singular.

as a side note, God I love how much DBS expanded the lore of the franchise and made so many more interesting conversations possible and just more rich in general
Spoiler:
Super carries on much of Dragon Ball and Z's charm in ways that might not immediately be obvious, while also bringing something new to the table. I certainly can't think of any previous arcs like Goku Black, and, for all its problems, the Tournament of Power is possibly the most ambitious storytelling endeavor in series history as far as how its narrative unfolds. It's also a thrill ride, which is all I wanted and exactly what I got. Super also canonizes decades old fan theories in ways that very naturally tie into the overall fabric of Dragon Ball's world in satisfying ways. All in all, Dragon Ball, Z, and Super are all well worth experiencing.
Top

I'm still confused on just the mortal realm. I'm still not sure if the universe consists of only four galaxies or if it's the same size as our own. But as for the dimensional thing, here's a good way to visualize it: 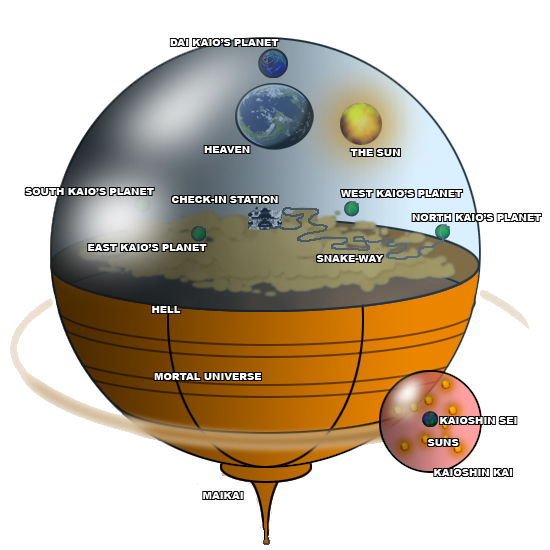 It's kinda like going to Neverland. In Dragon Ball, the Otherworld is another dimension, as if the sky/background tore apart to reveal it. From either the mortal realm or the Otherworld, you can access the Kaioshin's planet, which is in space between dimensions. It's confusing, but a symbolic depiction of heaven, because above the clouds there's only space.

The mortal realm consists of those slices in the lower hemisphere.
Top

There's multiple galaxies in the DB universe as seen from Super Shenlong's introduction, however its likely that only 4 galaxies have life in them due to many factors.

- Shin being the only Kaioshin in U7 for several million years, and leaving the duties of creating planets & the building blocks of life all on his own
- Majin Boo's time awake, throughout the entirety of his existence, was probably spent destroying inhabited worlds or leaving them as dead husks all throughout the universe
- U7 is lower on the strength scale than other universes so conflicts in U7 may kill off more beings because there aren't enough powerful fighters
- Life in U7 may just be more subsceptible to disease, famine & drought may be more common, and it might have naturally lower lifespans
- Many sets of worlds in U7 may depend on each other in order to survive, and if one goes down then they all go down
- Beerus may just not give any f*cks about how many inhabited worlds he destroys, and whatever consequences that leaves for life in general

That might be why there are only "4 galaxies" as far as anyone is concerned.
"Why is a raven like a writing desk?" - The Mad Hatter

It used to be pretty popular to refer to the four areas as the four "quadrants," each of which had multiple galaxies within it... now that we've seen space zoom-outs with many galaxies visible and had comments about there being many galaxies in the universe, it's looking like this is pretty much exactly right.

If I'm remembering right North Kaio refers to the planet Namek not being in his "area," and some of the guides have used "area" rather than "galaxy" to refer to the four regions of space. I'm guessing when the Japanese version does refer to, say, the "North Galaxy" (rather than using "area" or just the directional words) it's actually closer to "North Galaxies" since the Japanese language doesn't do plurals the way English does.
Top
Post Reply