LMAO at the people who genuinely think that Bandai Namco and Toei give 2 shits about japans TV ratings, while the sales for DBS DLC's for Xenoverse 2 and FighterZ are overwhealmingly massive..

Meanwhile, Crunchyroll's servers keep collapsing every saturday night when a DBS episode comes out... Nothing to worry about!!
Top

Oh, it mentions "poor merchandise sales" so it was a failure, Please.

And the conversation was about GT, right? The article is about Kai. Also Kai didn't has in any of its iterations poor merchandise sales.

Note languague here, is important. One thing is doing worse in some quantity with a previous/future value, another is doing "poorly". Just because something does worse than another thing doesn't mean that something is "poor". By that logic you would peak the best selling merchandise series and tell that the industry is horrible because all the other series are doing poorly. This is not how it works.

Is amazing how Toei Animation in this last 10 years, or more, was totally crushing the competition of anime studios, doing like 4-5 times more than one os its bigger competitions, and had all of its current franchises in the Character Merchandise Market Top 20, but for some reason, Dragon Ball Kai, at the time the 2nd most profitable series of the company, is doing poorly. If doing poorly is that, I believe that everybody would love to do that poorly.

GT? Wasn't me taking about it. That's somebody else.

If I have to nitpick my own post, I guess instead of using my own interpretation I should've just quoted the article.

What said article says is actually:

in regards to Kai.

The "exponential drop in sales figures" is basically a similar phenomenon that happened with One Piece Marineford arc. High hype that brought new fans and brough a huge inflation of sales(because people is buying everything of the franchise in a short period of time) and then soon or later that enthusiasm just faded, like normal. Abnormal would be if the enthusiams kept and or the same amount of new people kept entiring the series or the current ones kept buying the same amount of things from the franchise. It would be different if the franchise was introducing new stuff, but it wasn't. It was all reairings and only much later just a remaking.

In the case of Dragon Ball Franchise, it got a Revival in 2003, got its peak in 2007, and got an Reenlargement in 2009 with Kai(2 years after the peak).
So yep, when Kai came and in its entire first part, it was getting decrease in sales. Still, not only was getting amazing sales for a remake series, but for a series in general. The problem seems to be 2 to comprehend this:

1. The sales were in decline.

2. Compared with the peak of the series(and is competitor One Piece), that was doing numbers incredible high for any other series, it was doing way less.


Here you have the image of the sales for the franchise a little before and during Kai: Note: is said that in average companies spend 150,000 dollars in one episode of a series. Toei is said to be 100,000 dollars. With 50 episodes per year, a average series spends 750 Thousand dollars per year. So this means that in 2011, with Dragon Ball Kai(that is a remake so even cheaper), just with Domestic Licensing, did a profit of around 2.68 Million dollars.


A series doing Monstrously, like the Super right now 3500 Million yen sales(that is bigger than Top 10, maybe even some Top 5, Anime Studios entire sales) doesn't make 340 Million yen sales less good/big. In fact by that logic we could say that the 2007 Dragon Ball Peak was a huge failure, because it practically did 3 times less than Super last year(And One Piece 85/190 Million is basically embarrasing(19 times less) compared with last year 3700 Million yen sales).

Do you see, is easy to say Failed, Flop, Poor, exponential drop in sales when you just see the "difference" and not look at the actual numbers and what they mean).

That's where people don't understand Japanese market. You are so right about Dragon Ball Super. The argument that it's ratings isn't as high as GT fails. A series sales are what going to keep you on the air. It's just that simple.
Majinwarman
So I'm 'evil', huh? Interesting."
A world without Dragon Ball is just meh.
Top

I don't believe Dragon Ball Super is getting cancelled. The Kitaro speculation is at the moment, a stretch. Super is too successful in other avenues to let the show end, so it would likely get dumped to a less desirable time slot if Fuji TV was displeased with its viewership - which we've been given no indication of.


Faisal Shourov wrote:TV ratings drop will only accelerate, cable tv is set to become extinct in 20 years. The younger millennials and Gen Z don't watch TV at all. I haven't watched cable TV since 2014, nor I ever plan to in future.

Fuji TV isn't a cable channel. Relatively speaking, in Japan, cable/satelite service never reached the same kind of penetration it did in North America or even Europe.

I'm not denying that VOD services have eroded linear television viewing in most developed markets of the world. I just felt that needed to be said because the barrier to entry to watching DBS on TV in Japan isn't the same as asking to watch DBS on TV in the US. If you own a TV in Japan, you have access to Fuji TV or one of its affiliates. For free. You'd "just" have to deal with waking up/setting a DVR/ads.

Does anyone know what Dragon Ball Super's VOD availability is like in Japan? Is it only available through Fuji TV's services, or is it on Hulu/Animax Plus/Amazon Prime/Netflix?
"I like the money it brings in, but Dragon Ball Heroes is the worst. That's actually the real reason I decided to start working on new material. I was afraid Bandai would make something irredeemably stupid like Super Saiyan 4 Broly." - Akira Toriyama, made up interview, 2013.
Top

Super Saiyan Prime wrote:I don't believe Dragon Ball Super is getting cancelled. The Kitaro speculation is at the moment, a stretch. Super is too successful in other avenues to let the show end, so it would likely get dumped to a less desirable time slot if Fuji TV was displeased with its viewership - which we've been given no indication of.

Just a simple point, a series ending is not the same as it being cancelled. Ending -> stop its release. Cancelled -> Stop its release prematurely when it had further material.

Cancelation is a type of ending, ending is not cancelation. Also a series rarely is planned in a given time to run forever. Not even One Piece is. The only ones right now that I think are in that motto; is Sazae-san, Chibi Maruko-chan, Doraemon, Shin-chan.
Running in a predefined time period is specially true in original series and series extensions(like GT, Kai and Super).
Top

No ratings for episode 122 yet?
Top

I think Pokemon didn't air that week, hence why Super moved up a slot and why Pokemon isn't on the list at all.
Top

precita wrote:I think Pokemon didn't air that week, hence why Super moved up a slot and why Pokemon isn't on the list at all.

But, at least the ratings has gone up a bit. So, at least that is a positive.
Majinwarman
So I'm 'evil', huh? Interesting."
A world without Dragon Ball is just meh.
Top


Pokemon beat Super like twice in 120 weeks, though...
Top 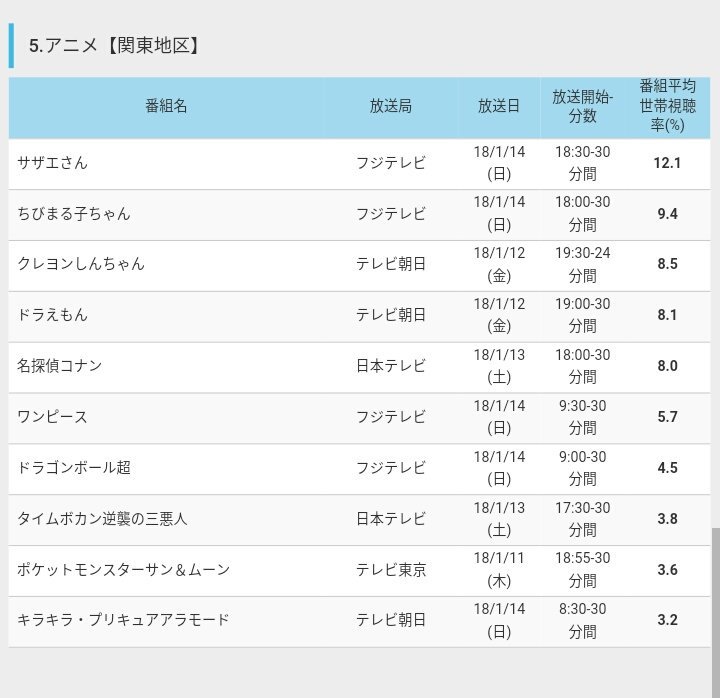 
Which means people were more interested in the Vegeta fight?
Top

So it's seventh place ? I see it's still not leaving the 4's. Guess we can't use the winter holiday season as an excuse anymore.

Again, not really worried about ratings anymore, but I do think they are worth keeping an eye on/
Top


Which means people were more interested in the Vegeta fight?

Confirmed, Gegege no Kitaru will get Dragon Ball Super timeslot next season.

I wonder if the declining ratings really did have an impact after all. Super sinking to the 4.0's really was a killer.
Top

precita wrote:2017 had the worst ratings overall for Super, much lower than they were for its first 2 years during 2015 and 2016.

I wonder if the declining ratings really did have an impact after all. Super sinking to the 4.0's really was a killer.

Almost certainly not. You had 2 things. Super was already in the extension mode. It was firstly only planned for 2 years. Gegege no Kitaro certainly would get an anime before the end of the decade(it has since the 60s one anime series per decade) and this timeslot was its timeslot.

People taught Super standard is running forever and stop running when it failed, but that is in no way how things work.
Top 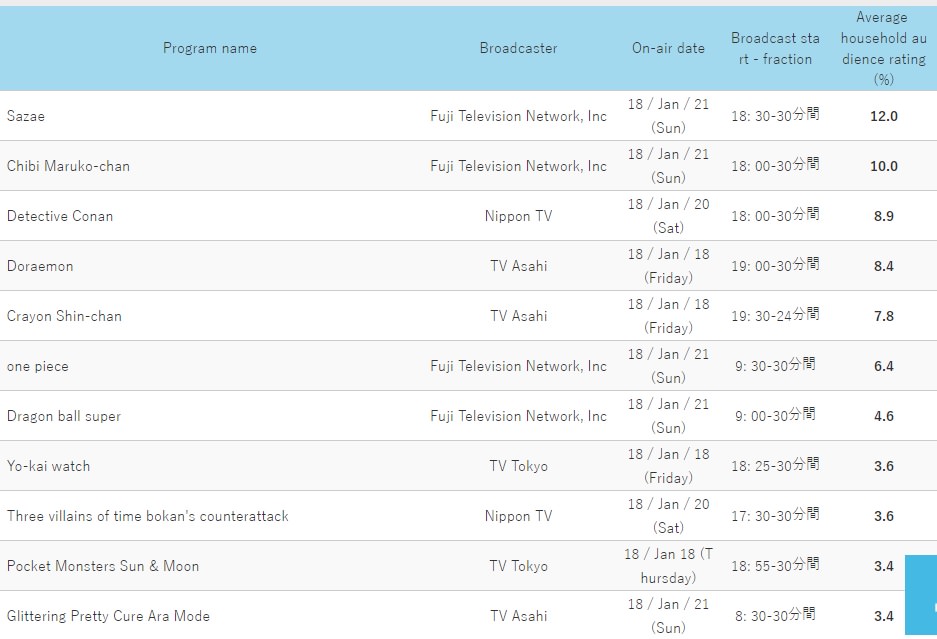 Gohan episode did better than the last 2 Vegeta episodes, but still below the 5.0 mark.
Top
Post Reply