We cover anything and everything Dragon Ball in hopes of enlightening... and a little bit of entertaining. Hosted every week by the Kanzenshuu staff and regular special guests from the professional and fandom communities. Your first, best, last, and only Dragon Ball podcast!

Episode #0467! Mike and Kirran check in on the trainwreck that is "Jump Force", the latest crossover fighting game in support of Jump's 50th anniversary. The big question: is it a hilarious trainwreck, or is it just awful? Tune in for all this and a tease of upcoming website content and the next podcast episode!

Fun fact: I was offered to do a guide for this game, but declined because I really don't know anything about fighting games.

KBABZ wrote:Fun fact: I was offered to do a guide for this game, but declined because I really don't know anything about fighting games.

EDIT: OH JESUS LOOK AT HOW THEY TEXTURED GOKU'S HAIR!

What is even more hilarious is they used the digital models used for figures for the game models...
For example the back of Freeza in that pic has Nakazawa's trademark back muscle definitions:
Spoiler: 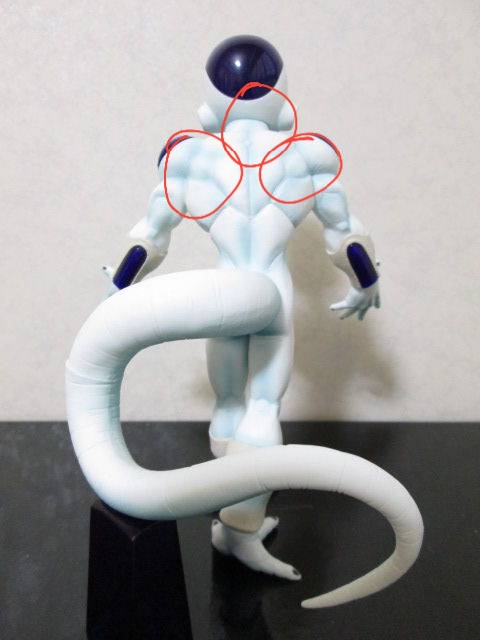 KBABZ wrote:Fun fact: I was offered to do a guide for this game, but declined because I really don't know anything about fighting games.

EDIT: OH JESUS LOOK AT HOW THEY TEXTURED GOKU'S HAIR!

What is even more hilarious is they used the digital models used for figures for the game models...
For example the back of Freeza in that pic has Nakazawa's trademark back muscle definitions:
Spoiler:

Good grief, isn't the point of Final Form (not-100%) Frieza that he's meant to be very LEAN in build??
Top

Haven't listened to the podcast yet (admittedly I've fallen super far behind), but in regards to the game itself, it's...a mixed bag.

I'm enjoying it for what it is. Graphic-style decision aside, the fighting system is fairly fun IMO, though the game's AI is pretty awful at times. The story's pretty basic (I haven't finished it yet), but really, it's a massive Jump crossover game, I was never expecting something grand scale in terms of the story anyway. I just want fun interactions between all these characters, and so far it's been delivering decently well on that front.

Beyond that though, there are a lot of things that are also frustrating me. The RNG for the missions can be GOD AWFUL at times, nearly approaching Xenoverse 1 levels of bad rather than the slightly better Xenoverse 2 style. There's also some other decisions in the making of the game that I cannot for the life of me understand. Why are some of the character moves unable to be gotten for our CAC? If they can give us blue energy swords to allow us to use the energy moves, then there's no reason we couldn't have like...an energy gun to do Ryo Saeba's moves. Or a giant blue energy Slifer the Sky Dragon (or just, you know, ignore logic and say we got the card too or something). There's no good reason to keep some of the moves locked away behind things.

I also do not know who decided the naming scheme for all of the outfit pieces and accessories, but JESUS CHRIST do I want to smack them upside the head. Like, seriously? We're just going to name things 'pants 04' and 'vest (male) 03'? That's not only just boring as hell to read, it also makes it a lot harder to keep track of things as well. Why could they not have just listed them with identifiable character names? Like 'Luffy's shirt' and 'Goku's gi pants' or something? It boggles the mind.

Overall, like I said, the game is one hell of a mixed bag. I'll be playing a bit more of it today, but I've already learned that this is not one of those games you want to spend much of your day playing, or it'll drive you mad pretty quickly. At least, it will if you're attempting to unlock all of the skills and outfits like I am.
Top

From the jump (no pun intended) I thought the designs were terrible, too realistic, but not like fantastic, more like Polar Express realistic.

The backgrounds though i do like, maybe reg cartoon graphics with real 3d realistic backgrounds like the amazing world of gumball, that wouldve been awesome. Also, more character specific interactions might carry the game a lot further even if the gameplay stays the same.
Top
Post Reply

Return to “The Podcast”