Amond is a fictional character in the Dragon Ball franchise, serving as a henchman in the Tullece Corps under Tullece himself, originally debuting in the third theatrical Dragon Ball Z film in July 1990.

Son Goku defeats all members of the Tullece Corps. 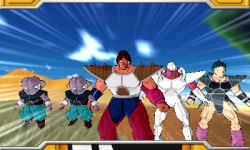 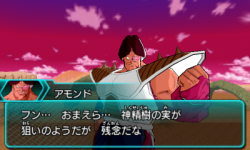 Originally a villainous criminal traveling around the galaxy, Amond was arrested by the space police organization and jailed on Planet Nutz. He broke out when Tullece attacked Nutz, and became one of Tullece's men.[2] Amond is the largest of the Tullece Corps members, but is still quite agile.[3] With braided long hair and both ears pierced[3], Amond also sports a large scar on his left cheek (running all the way down to his chin). Amond's outfit includes four horns (two on each shoulder), and a piece of protective gear on his right hand (the same that Daiz and Tullece also sport).[2] Amond is also notable for use of the "-desse" expression.[4][2]

Along with the Tullece Corps, Amond scouts Earth as a planting ground for the Tree of Godly Might. On the planet's surface, Amond uses an explosive technique from two fingers to create a hole which Daiz flips the tree's seed into.[6] Amond and the rest of the Tullece Corps confront Son Goku and the others following the tree's growth. Amond does battle with Kuririn, turning at high speeds to reflect the Kienzan.[7] Amond and the other Tullece Corps members later attack Goku all at once, who grows angry and defeats them in front of Tullece.[6][3]

In the lower-path side mission of the Saiyan arc, the player encounters the Tullece Corps (named the "Crusher Tullece Corps" here), having planted the Tree of Godly Might on Earth. Following the player's battle with Rezun and Rakasei alongside Tenshinhan and Chiaotzu, the player then challenges Amond alongside Kuririn (with an "Ultra Clear" condition of defeating him within four rounds). Amond states that no-one can destroy the tree, and to not underestimate them (in dialog stripped verbatim from the third theatrical Dragon Ball Z film). Following Amond's defeat, the player goes on to challenge Cacao and Daiz, and then Tullece himself.[8]

In the game's original story mode, portal 3-3 brings the player and Son Goten: Xeno to the base of the Tree of Godly Might. Bardock's teammates — Selypa, Totapo, Toma, and Pumbukin — are also there, seeking out the tree's fruit. Amond arrives to protect the tree and its fruit, prompting a battle with the player. Upon defeating Amond, the player moves on to battling Cacao and Daiz, followed by Tullece himself.[10]

In the chapter 1 side story "Note's Adventure", though Great Saiyaman III attempts to teleport Note somewhere safe to train, she instead finds herself at the base of the Tree of Godly Might. Note rushes off to find Tullece: Xeno and his crew, only to find Caulifla and Kale have already done so. Great Saiyaman III can tell that Tullece has absorbed a Dark Dragon Ball, and asks Note to get closer to observe the situation. Tullece has seemingly offered the Saiyan women some of the fruit; Caulifla and Note are to keep watch while Tullece and his gang check things out, themselves. As Kale expresses her uncertainty, Note flies in to tell the two that they are being tricked.

After a brief scuffle, Caulifla agrees to side with Note. Tullece and his henchmen return, with Amond noting that they overheard everything being discussed. Tullece eats the fruit, powering up significantly, and attacks the group with his henchmen in tow. Upon their defeat, Note and the others go on to challenge Tullece directly.[11]

Amond is not referred to by name during the third theatrical Dragon Ball Z film; the character's name is first documented in the film's ending credits. 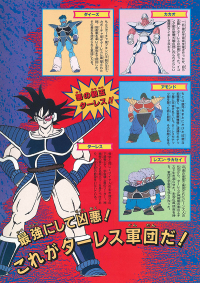 Character biographies for Tullece and his henchmen, including Amond, from the brochure available to attendees of the Summer 1990 Toei Anime Fair.[2] 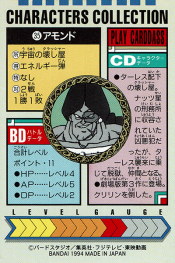 Amond's back-history regarding him being a galactic criminal arrested by the space police organization and subsequently jailed on Planet Nutz, where he later breaks out and joins with Tullece, is not present within the third theatrical Dragon Ball Z film where he appears; rather, this information is only included within the theatrical brochure as well as the Akira Toriyama: The World Anime Special book[12]. While this information is not included in later guidebooks, it is recycled for the back of Amond's "Characters Collection" Carddass card in 1994.[13]

Said reference to a "space police organization" is the first of its kind in the Dragon Ball franchise, and a likely lore predecessor to what would eventually become the Galactic Patrol.

Amond is played by Banjō Ginga in one of his many Dragon Ball franchise performances (alongside characters such as Giran, Colonel Silver, and Bora). Alongside other voice actors, Ginga provided a comment for the Akira Toriyama - The World Anime Special book:


Hah! I'm Amond!! To be frank, I'm strong! But my personality, to be frank, isn't very pleasant!! (laughs). As the largest member of the Tullece Corps, Amond goes on quite a rampage when fighting Goku and the others!! I hope you will wholeheartedly enjoy this fun "DBZ" story.
— Banjō Ginga, Akira Toriyama - The World Anime Special

Amond (credited as "Almond") is played by Lutz Schnell in the German dub of the film produced by the AB Groupe. 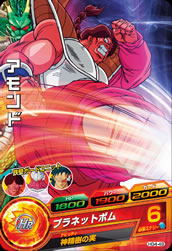 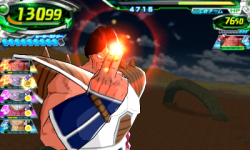 Energy Bullet (エネルギー弾 Enerugī-dan) is a generic ki blast; alongside other characters, Amond has this ability in the Carddass series.

Amond's Universe Wrecker (宇宙の壊し屋 Uchū no Kowashiya) is an ability in the Carddass series and Dragon Ball Heroes where, if the player's team's HP is below 50% at the end of the round, the enemy team's Hero Energy is reduced by 3. Universe Wrecker is available on Heroes cards HG5-24 and HG8-24.

Amond's Cruel Attack (残酷な攻撃 Zankokuna Kōgeki) is a special ability in Dragon Ball Heroes. If the attacker's special move is available for use, they may use this one-time ability to lock on to an enemy, reducing that character's guard by 1000 and making them the target of the attack. Cruel Attack is available on card HG8-24.

Amond's Victorious Triple Attack (勝利のトリプルアタック Shōri no Toripuru Atakku) is a special ability in Dragon Ball Heroes. Anytime after the start of the second round, the attacker may use this ability once during the team attack to perform a Triple Attack with their two teammates. Furthermore, if the enemy is hit by a Super Triple, the damage will be doubled. Victorious Triple Attack is available on card UM11-024.

Crusher Genocide (クラッシャージェノサイド Kurasshā Jenosaido) is a Super Attack in Dragon Ball Z: Dokkan Battle which raises Attack for one turn & "causes super maximum damage to an opponent" with the high probability of stun afterwards. Amond appears as a part of this attack within "The Best Destroyers in the Universe — Tullece Corps" card.

Amond uses the でっせ (desse) expression in place of a standard です (desu) state-of-being verb; this is a speech quirk notable in the Kansai dialect.


Lord Tullece. You will be most pleased. Earth's soil appears to be suitable for growing the Tree of Godly Might.
— Amond, Dragon Ball Z Movie 3